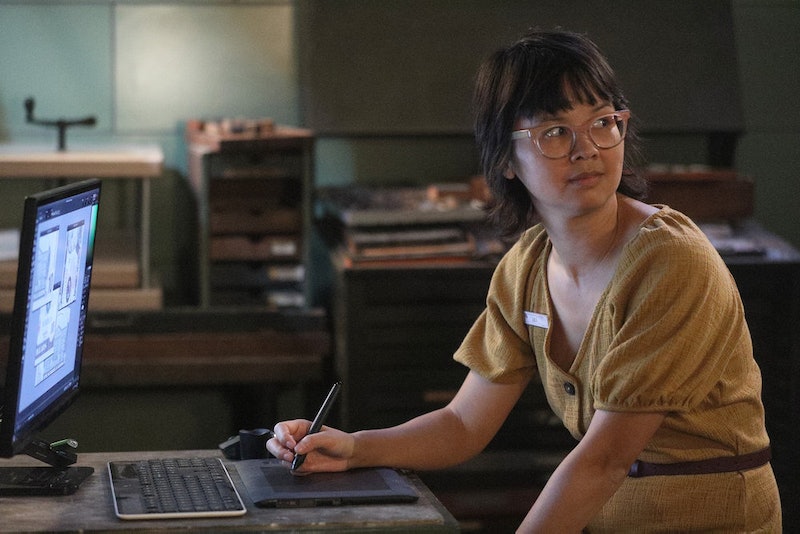 Spoilers ahead for Good Girls Season 3, Episode 5. Beth may have found a way to (temporarily) evade Rio's wrath, but unfortunately, Lucy on Good Girls wasn't so lucky. After Beth hoodwinked her innocent coworker into designing their money printing plates, Rio showed up at the card shop and forced Lucy to make one for him — the idea being that with his own plate, he wouldn't have to rely on Beth.

Afterward, Rio offered Lucy a ride home and assured her that she'd be safe. "Only way someone like you gets hurt is if they talk. You're not gonna talk, right?" he asked. She promised that she wouldn't and got into Rio's van. But then Beth, realizing this put her back on the chopping block, made an impassioned plea. She told Rio he didn't just need the plate; he needed hers and Ruby's and Annie's expertise on things like the water-to-paper ratio and ink thickness needed to make their perfectly undetectable counterfeit money. Without them, he'd only have the recipe and not the ability to create the product.

But Rio, sick of Beth constantly undermining him, decided to make a point. "No. Not all of you," he told her firmly, then instructed his associate to shoot Lucy in the head. The intent seemed to be less about preventing Lucy from talking and more about showing Beth that she doesn't make the rules anymore.

Now not only are the women's lives still in jeopardy, but they have another murder on their consciences — and Lucy's concerned boyfriend Max to deal with. After Lucy didn't come home the night she was killed, he came into the card shop to ask Beth if she'd seen her. It seems like he'll be extremely proactive in trying to find Lucy, and he may stumble upon the women's secret in the process. The next two episode synopses tease that Max will continue to play a central role. "A guilty Beth convinces the women to go to grisly lengths to keep Max out of harm's way," reads the description for the March 22 episode.

Beth has gone overboard to offset her guilt before — like befriending the mother of Rio's son when she had killed him. There's no telling what she'll do to try to keep Max from finding out the truth about Lucy. But going to "grisly" lengths does not sound good for anyone involved.

The March 29 episode synopsis also teases that, "The women call on an unexpected ally to help Max seek revenge. But when their plans go awry, Ruby's life is put in jeopardy." It sounds like Beth is maybe going to push Max in the direction of taking down Rio for killing Lucy, but as with most of Beth's plans, it goes awry. Now both Max and Ruby could wind up dead. Dean seems convinced that Rio won't kill Beth because he "loves" her — but he may kill everyone she loves.