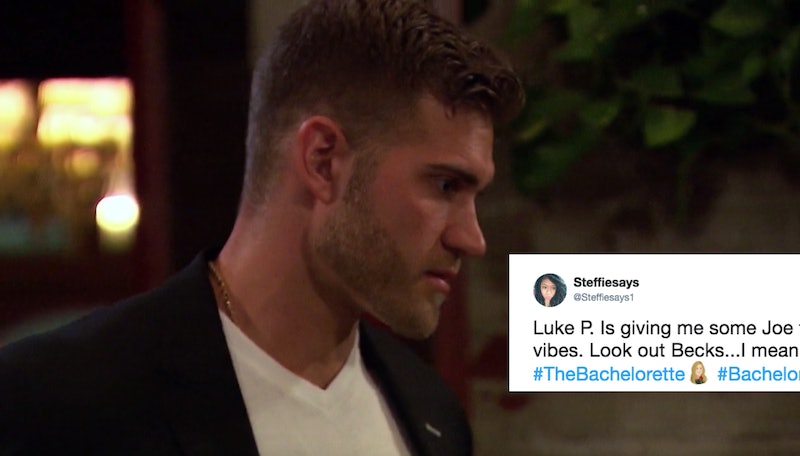 Although the show is called The Bachelorette, Hannah Brown isn't the only star this season. Luke P. is constantly in the spotlight. Even Hannah remarked, "Luke P. stole the show again, but in a negative way." With his pacing back and forth and tendency to be right behind Hannah, fans can't help comparing Luke P. to Joe from YOU.

The show YOU originally aired on Lifetime, but gained major popularity when it hit Netflix. The series is about a bookstore manager named Joe Goldberg, played by Penn Badgley, who becomes obsessed with a customer named Guinevere Beck. (Without spoiling much, things take a very dark turn for Joe and Beck, and in that way, the comparison is, of course, a bit of an exaggeration.)

As for Luke P., he told Hannah that he was "genuinely falling in love" with her during their first date ever, which happened to be a group date with very little quality time. Many (including Bachelor Nation alums) took that as him coming on too strong too early.

Obtaining quality time has been a major issue for Luke. It's as if he doesn't know what show he's on. He literally signed up to be one of the many guys hoping to end up with Hannah. She only has so much time on her hands, but Luke kept interrupting to get more one-on-one interaction. Sure, this was probably encouraged by production, but it was still cringe-worthy. Interruptions never go well on this show.

Even when Hannah confronted Luke about his behavior and told him that she wants to "call the shots" on her own season, her words did not hit home with the contestant. In an on-camera interview, Luke shared, "She told me she's irritated with how I'm acting. I'm coming off arrogant and just too confident." However, he didn't take it as motivation for any sort of improvement. Instead, Luke declared, "I'm gonna act like that conversation never happened."

That was not a good idea and neither was Luke's constant quest for attention. He gave off some major YOU vibes all season long, but especially during the Monday, May 27 episode.

The only good thing about Joe is that he's a fictional character. What's Luke's excuse for the seemingly obsessive behavior? Oh, right, editing. Or at least that's the most likely default for any reality TV participant.

Was Luke actually the inspiration for this character? Or is life imitating art?

3. Luke Gives Off Some YOU Vibes

This fan is not the only one who feels this way.

4. Cam Gave Luke A Run For His Money

Luke P. wasn't the only one lurking around corners, interrupting conversations, and making Hannah uncomfortable. Cam was pulling the same stunts. However, Hannah gave Luke a rose and sent Cam packing at the rose ceremony.

Nick Viall aside, Bachelorette contestants are only on one season of the show. Maybe Luke and Cam just wanted to be on Season 2 of YOU and looked at this Bachelorette season as an audition. (Probably not, but it's a positive spin to the situation.)

Hannah had no problem putting Luke in his place, but Why. Is. He. Still. Here? It just makes no sense. Be careful, Hannah. Even Demi Lovato agrees.

7. Maybe Luke P. Wants To Be The Next Penn Badgley

Badgley needs to watch out. Luke could really do a good job playing Joe next season.

8. He'd Probably Fit In On Lifetime

Luke's portrayal on The Bachelorette has all of the makings of a Lifetime movie or TV show, which isn't *necessarily* a good thing.

9. Luke Needs To Slow His Roll

Words of affirmation are (generally) a great thing, but Luke P. really needs to slow it down a bit. He is coming on way too strong. Then again, he's still getting roses, so he has to be doing something right. Maybe the flattering footage is on the editing room floor?

Of course, Hannah wants to be pursued by the guys, but Joe, I mean Luke P., has gone way too far.

So many Bachelorette fans think that Luke P. is the embodiment of Joe from YOU. If only the viewers were there to advise Hannah during filming. She could have been saved from the constant interruptions and toxic masculinity.