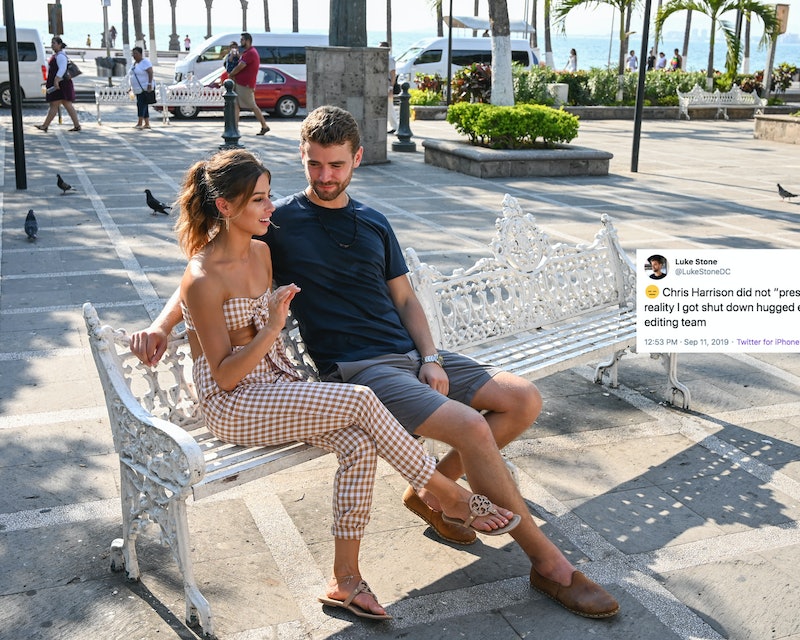 From a viewer's perspective, Luke S. experienced one of the most awkward exits in Bachelor in Paradise history. Not only was his rose rejected by Bri, but when Chris Harrison offered it up to all members of the cast (which would guarantee them more time on the show), there still wasn't any takers. The whole thing was completely cringeworthy — but what if that wasn't actually how things went down? Luke S. has addressed that awkward BiP moment on Twitter by providing a few crucial, behind-the-scenes details that'll make you think of that scene in a completely different light.

According to Luke S., his rose was never presented to the group at all when the initial filming occurred and was only created through the magic of editing. "Chris Harrison did not 'present my rose' to the group," Luke claimed in a tweet posted on Wednesday, Sept. 11. "In reality I got shut down hugged everyone and left - well done editing team." Bustle reached out to ABC for comment to confirm Luke S.'s claim, but had yet to receive a response at the time of publication.

Luke S. added his feelings of frustration in a follow-up tweet, stating that after seeing it all air for the first time, he just couldn't stand by and remain silent about what really happened.

It's unclear whether or not Luke S. will be given the chance to air out his concerns on the matter during next Tuesday's reunion special. But until then, he's making a solid effort to share this information with his followers and explain why the moment really wasn't quite as awkward as the show portrayed it to be.

So if Luke's claims are true, how did the producers make it all seem so real? The former Paradise star provided one final tweet in an attempt to answer that question, writing: "It’s called a voice over nice try guys."

If Luke's side of the story is really how it all actually played out, then it's definitely not quite as humiliating as the version viewers had to endure this week. Granted, it still probably didn't feel great having your rose be rejected (especially since, as Harrison said on the show, that's never happened before), but it definitely brings the cringe factor down at least a few notches.

Of course, Bachelor clips and promos are known for being misleading — edited in a way that's sure to pull fans in and make them think they know what's coming only to reveal a totally different outcome during the actual episodes. However, this would take the idea of editing trickery to a whole new level. It also makes you wonder what other little change-ups have been done to make things look worse (or more dramatic) than they actually were. Again, this is the Bachelor franchise, so it's not all that surprising, but it still can make you think of things a little different and perhaps not be so quick to judge.

Regardless, let's hope Luke is able to move on from this little editing hiccup and find love with someone else — perhaps on a less public platform.