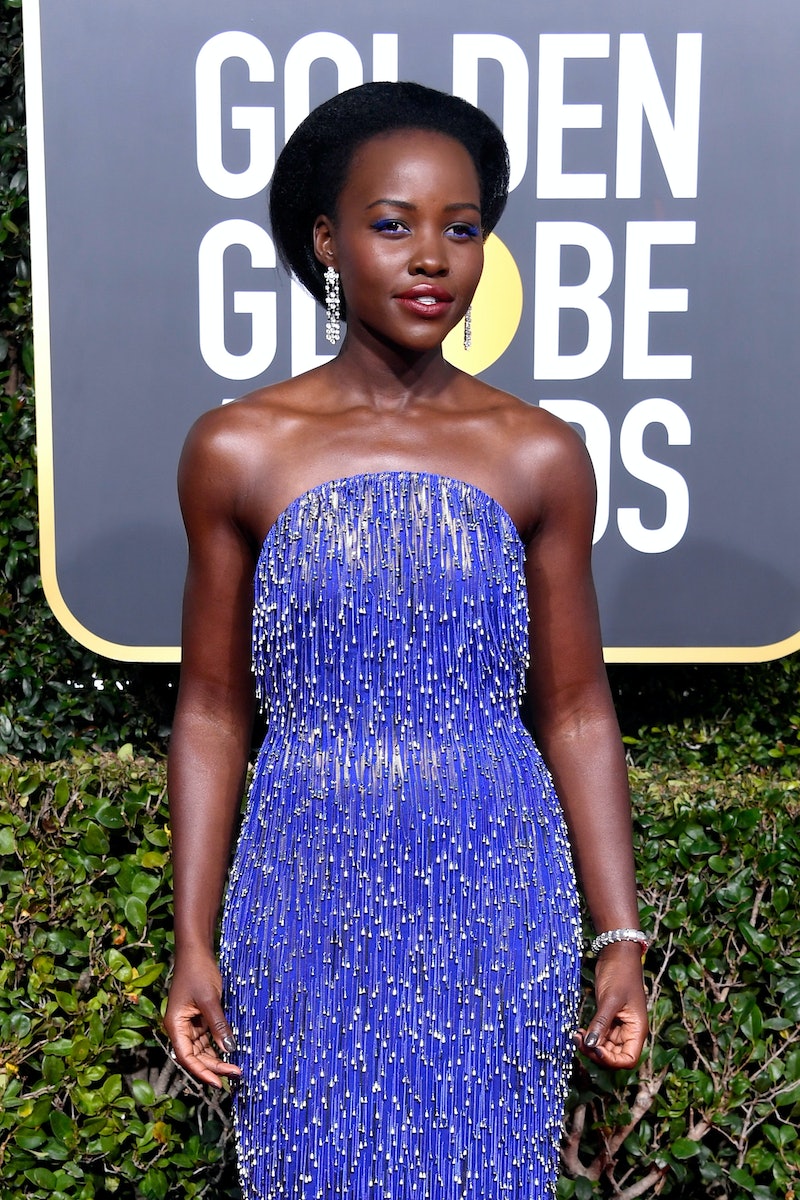 Award shows are rare moments when famous people act totally down-to-earth and alarmingly normal whilst donning thousands of dollars in designer tuxes and gowns. However, there's nothing normal about Lupita N'yongo's purple fringe dress at the 2019 Golden Globes red carpet. Although, it's Lupita, are you really all that shocked at this glamazon woman?

N'yongo had a whirlwind of a year in film. Early last year, she starred in a little movie called Black Panther, which garnered her and her cast mates 2 Golden Globe nominations. When a film makes over $1 billion in less than a month, one should be nominated for something after all.

Tonight, in very Lupita fashion, N'yongo wore a floor length indigo fringe gown along with a pair of sparkly studded earrings to match. There's nothing like a deep shade of ultraviolet to make melanin skin pop. The Academy Award-winning actress wore her hair out naturally in a simple halo style as a nod to her roots.

It comes as no surprise that N'yongo came to turn out a deadly look this year. While the actress isn't up for any solo awards, Black Panther is up for several, and everyone's anxiously awaiting the new Jordan Peele thriller Us that she'll be starring in this March.

As she arrived to the red carpet with her Black Panther co stars Danai Gurira and Micheal B. Jordan, N'yongo donned a floor-length indigo gown with beaded details at the end of every. single. fringe. The time this may have taken looks grueling, but oh so worth it.

The strapless gown served N'yongo well, giving her killer toned arms and neckline the spotlight and attention they so well deserved.

To wrap up the ensemble up into a full look, the award-winning actress even wore purple mascara and a deep red lip tying in colors to pop on her butter-like skin.

It's hardly the first time Lupita's shown favor for long purple gowns as she sported a similar shade of indigo to the premiere of the Black Panther movie in another sleeveless dress that put her triceps on display.

Even back in 2015, the actress had worn a purple and white dress to the Golden Globes and paired it with a small afro similar to the halo style she's wearing now four years later. Maybe she's a creature of habit or maybe this is just her color.

The headlines of Black Panther making record-breaking history has been overwhelming for comic book nerds — and the Black community. Breaking another record for this year's Golden Globe Awards, the action and adventure hit will be the first time any blockbuster Marvel film has been nominated for Best Motion Picture.

When a fashionista like Lupita is representing a record-breaking film with a predominantly Black cast, there's plenty of reason to celebrate. However, when it's also up for Best Picture, one has to pull out a sickening dress for a win. Thankfully, this gown should do just fine walking up the stage steps prepared for an acceptance speech.