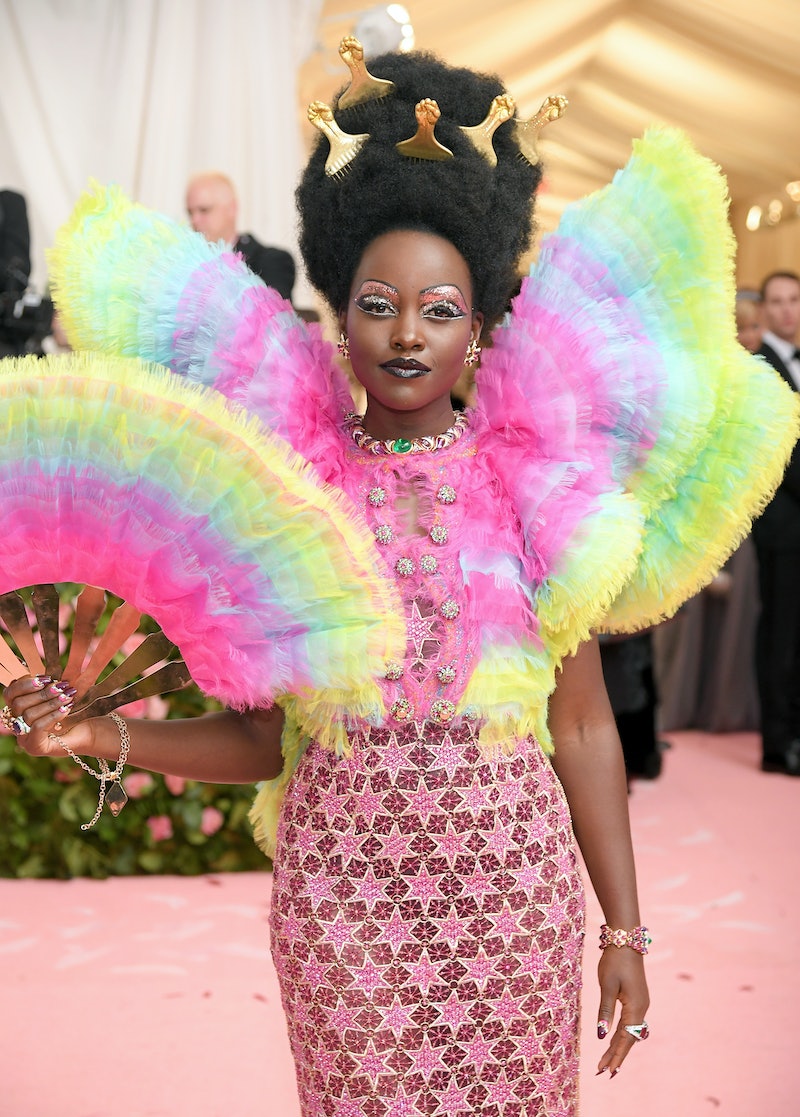 Attention, everyone: tonight is over, because Lupita Nyong'o's 2019 Met Gala ensemble just shut down the entire pink carpet. Donning an incredibly on-theme rainbow-colored gown — which featured shimmery pink star embellishments, over-the-top fluffy, multicolored shoulders, along with a matching fan, and sparkly buttons — Nyong'o may have just rocked the best look of the night.

With so much detail clearly going into her look, it's no wonder her stylist Micaela Erlanger revealed to Footwear News a few days before the Met Gala that this fit has been months in the making.

"It’s very collaborative. Lupita was invited by a designer to be dressed by them and sit at their respective table," she shared. "Her look is being custom-made head to toe. We looked at somewhere between 10 and 20 sketches, and ultimately, we settled on one."

As for the outfit totally being on point with this year's theme, she also added: "Lupita is just so confident and comfortable on the red carpet. She embraces every opportunity to go for it and have fun. When we decided on this sketch, she was very involved. It’s definitely a departure from anything that we’ve done in the past. It’s going to be perfectly suited to her."

But while the dress on its own was stunning enough as is, it was the actress' glam that really took the cake. Wearing a sky-high afro created by the talented Vernon Francois — who also styled her 2016 Nina Simone-inspired 'do — using a Dyson Supersonic to produce a style was not only stunning, but proved the versatility of kinky hair, which is exactly what Francois set out to do.

"I drew so many inspirations from our heritage in particular a self portrait by @laurendkelley 'Pickin' as well as #MarieAntoinette and considering the portions of #lupitanyongo dress and of course the theme," the hairstylist wrote on his Instagram. "Our goal is to continue to demonstrate the power of our hair #texture that it is the most moldable and luxurious #hair texture there is."

Francois also used five, beautiful golden Afro picks to adorn Nyong'o's hair, each featuring a black power fist at end of the handles — a subtle touch, but one that made a major impact to her overall look.

As for makeup, Nyong'o continued to stay on-theme, rocking a variety of glittery eyeshadows by Lancôme, that went all the way up to her eyebrows, along with a deep plum lip. The look was done by Nick Barose, who said in a press release that he "drew inspiration from the makeup that drag-queen Divine wore in the iconic camp films of John Waters like, ‘Female Trouble,’ ‘Pink Flamingos,’ and ‘Hairspray.’" The Oscar winner also opted for over-the-top nails, and a few chunky, statement jewels as well — proving she is one that does not play around when it comes to her fashion. And according to a 2015 interview with Elle, it seems as though having a unique style is something the superstar has long prioritized.

"I've always had fun with style. You know, I've always cared about what I wear," she said. "I've tried to express myself with what I wear and what I do with my outward appearance, to kind of somehow reflect part of my inner appearance. And yeah, it's always been a part of me. I've always had fun with it. I think now I've gone through like a crash course on the fashion industry and the art of fashion, which has been fun."

Crash course or not, it's clear Nyong'o's constantly stunning Met Gala looks have solidified her spot in Hollywood as a fashion icon.