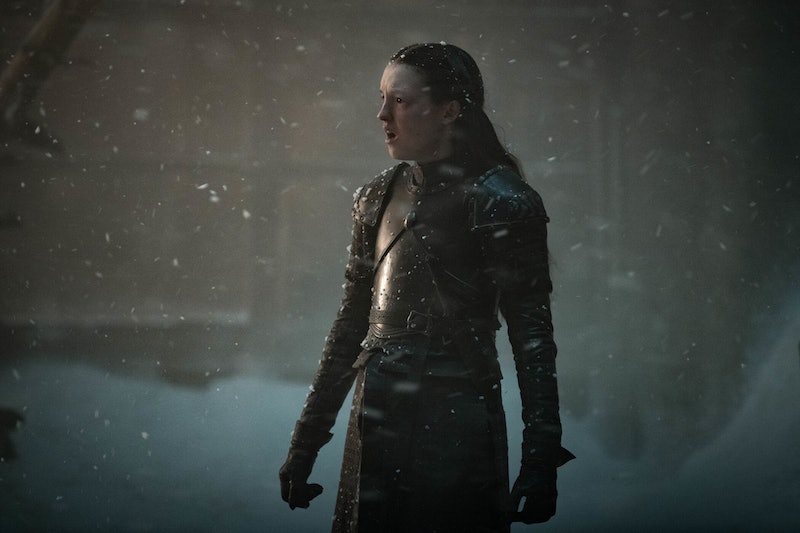 That little bad*ss took out a freakin' undead giant! Sure, he picked her up and smooshed her before dropping her to her death, but in Lyanna's final moments she used a dragonglass dagger to stab the giant in his blue eye and destroy him. It was the perfect homage to David and Goliath, or the troll in Harry Potter and the Sorcerer's Stone — with an added Game of Thrones twist. Unfortunately, we knew that some people had to die in the Battle of Winterfell. It stinks that both prominent members of House Mormont bit the dust, but what can you do? Jorah died defending Daenerys Targaryen, and Lyanna died defending Winterfell. She was one heck of a captain, too — did you see her shouting orders and leading her men? That giant should have thought twice before smooshing her.

The moment between Lyanna and the Giant also foreshadowed that moment with Arya and the Night King too, which makes it even more special. If there was ever a lesson to learn on Game of Thrones, it's to not underestimate anybody. Lyanna may be a girl, she may be young, and she may be short — but that didn't make her any lesser of a leader and any weaker of a fighter. She was right, the people of Bear Island fight with the strength of ten men.

The biggest problem with Lyanna's death, besides it being a devastating reminder that the stakes in this battle were both real and terrifying, is that Lady Sansa Stark could have used her as an ally in the wars to come. If the North is to maintain their independence if and when Daenerys Targaryen takes the Iron Throne, House Stark is going to need their banner men on their side. Now they've lost House Umber, House Mormont, and maybe even House Karstark as well. Who's left — the Vale?

Even before we met little Lyanna, she was fiercely loyal to House Stark and the North's cause. Remember that scroll she sent to Stannis, that made Jon Snow chuckle when he heard about it? She and her family refused to bend the knee to King's Landing, Team Baratheon, or Roose Bolton. They recognized one King in the North, Robb Stark... and then Jon Snow. It's going to take a lot of work to honor her memory and her cause. Now that the battle has turned from the North to King's Landing, the loyalties are going to be tested once again. Whether their fight is with Queen Cersei Lannister or Daenerys Targaryen, the North's independence has to be Lyanna's legacy. She fought for it, and she went out like a tiny hero for it.