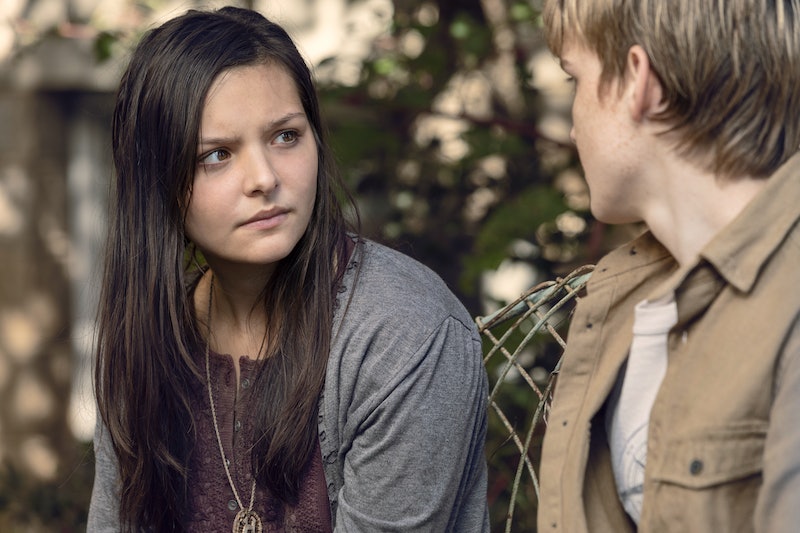 The recent pike deaths on The Walking Dead have a ton of characters – and viewers – giving Lydia a major side eye. The decision to grant her asylum from her murderous mother Alpha cost the communities several valued members like Tara and Enid along with Lydia’s love interest Henry. Now, she’s officially an Alexandrian and will have to carry her weight in the community. And, if Lydia’s fate in The Walking Dead comics is any indication, she will be around for a long time.

Per FANDOM, comic Lydia lived at the Hilltop alongside Carl. She harbors a lot of guilt over the lives that were lost against the Whisperers, but she ended being generally accepted by everyone. During a major Whisperer battle, one follower tried to convince Lydia to join their side once again because Alpha was dead, but she said she was firmly a Hilltopper now. Lydia did spill the beans about how her mother's group operated but she honestly wasn’t a major physical factor in the overall war.

She survived and continued her love story with Carl at the Hilltop, which still exists currently in the comics. So, anyone who hates Lydia may have to deal with the prospect of her being around for a long time. Her story very loosely mirrors Tara, who was once with The Governor's dangerous crew before she recognized the truth and joined Rick's side.

Fans presumed that a similar arc would play out with Lydia and Henry, who seemed to be taking Carl’s story arc with the Whisperers. But, Henry is dead so it will be interesting to see if Lydia takes on a more active role in the war. There’s a strong possibility that she will somehow end up under Carol and Ezekiel’s (assuming he lives) care because they know how much she meant to Henry.

Or, Daryl may feel obligated to take Lydia further under his wing because he feels some level of guilt about Henry’s death. Daryl has essentially taken Rick's place as a leading man and Aaron has remarked how he would be a great dad, so the signs are pointing towards him adopting Lydia.

Of course, there’s always a chance that Lydia could end up dying during this conflict. She may sacrifice herself to save someone else, but this probably won’t happen because she has been portrayed as a relatively timid teenager with zero valuable combat skills. Maybe Daryl and Connie really should take her in and teach her how to protect herself so she can be a bigger asset. If anything, she’s currently another liability that Michonne, Daryl, and Carol will have to protect alongside the many other people who have somehow survived this long and cannot fight.

It remains to be seen what the show will do with Lydia, but she will likely be around for some time. Will Lydia take on her own major arc in the show or somehow fall into the background once the dust settles from the war? Fans will find out soon enough.