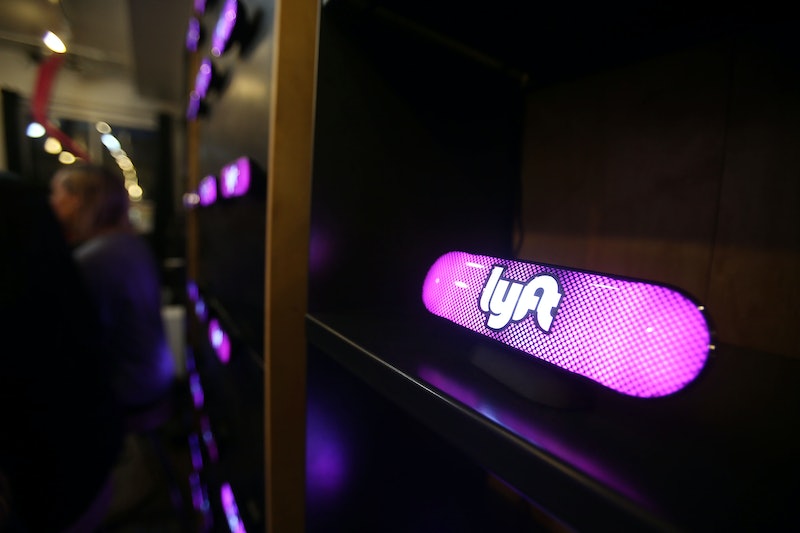 On March 24, advocates and activists in favor of gun control will be participating in marches throughout the United States, under the banner of the "March For Our Lives." And this week, one of the country's foremost ridesharing apps extended a gesture of solidarity with the event ― specifically, Lyft put out a statement supporting the march, announcing that it'll be providing free rides to the nationwide demonstrations later this month.

As Lyft explained in the statement, anyone attending the protests under 18 years of age will need to be accompanied by an adult to qualify for the free ride. But all the same, it's a distinct show of support for the gun reform movement. The march was scheduled in the aftermath of the deadly school shooting at Stoneman Douglas High School in Parkland, Florida last month, an attack which left 17 people dead, including 14 students.

Following the shooting, and amid weeks of impassioned activism by some students who survived the experience, several companies and brands have moved to position themselves alongside the cause of gun control and safety reforms. The companies include Delta, Hertz, Dick's Sporting Goods, and Walmart, among others, the latter two of which changed some of their policies regarding gun sales.

In the statement, Lyft co-founders John Zimmer and Logan Green expressed support for the march, and for the Stoneman Douglas students who've been at the forefront of the movement, all just weeks after surviving a harrowing mass shooting.

"We believe there is something seriously wrong when the threat of gun violence is so frequent and real throughout our country. And like many, we are inspired by your leadership," the statement says. "We'd be honored to support your work with free Lyft rides to March For Our Lives rallies across the country on March 24 (please remember, anyone riding under 18 must be accompanied by an adult)."

The statement also acknowledged the "fear and uncertainty" that recent shootings have stirred in the hearts and minds of countless people. Although different sources use differing definitions for terms like "mass shooting" and "school shooting," the assault on Stoneman Douglas High School is far from the only violent gun incident at an American school this year. To the contrary, according to CNN, there have already been 12 school shootings in the first couple months of 2018.

If you're interested in following or participating in the demonstrations, you have time to prepare, because they're still a few weeks away. The March For Our Lives will be taking place on Saturday, March 24, both in the nation's capital, and in cities and towns throughout America.

The march reflects a notable fact about the aftermath of the Stoneman Douglas shooting, likely enabled by the activism of some of its teenage survivors. Namely, while past mass shootings and high-profile acts of gun violence have momentarily lingered in the national consciousness only to seemingly go ignored in relatively quick fashion ― like the staggering mass shooting in Las Vegas, Nevada last year ― this one has shown some durability in the news cycle.

It's yet unclear, however, whether all the attention and scrutiny will result in some sort of new policy proposal, or a bill making it through the U.S. Congress and being signed into law by President Donald Trump.

That strident position has often been echoed by Republican members of Congress ― many of whom are the recipients of major campaign donations from the NRA ― scuttling any hope for meaningful legislative reform. Those are the forces the March For Our Lives is trying to combat, although it remains to be seen just how successful it will be.