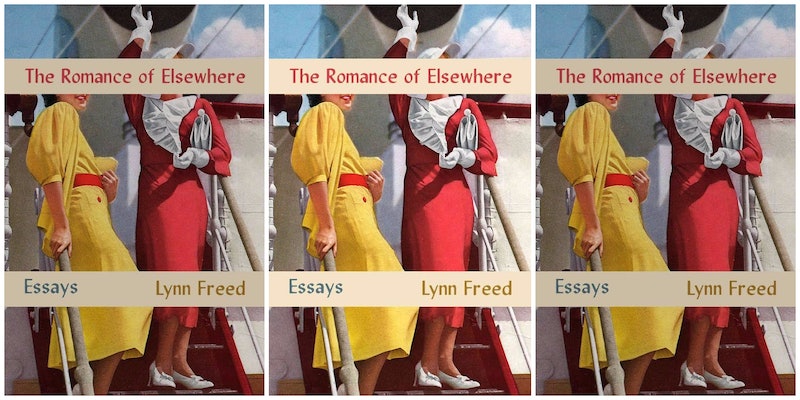 If Joan Didion and Fran Lebowitz had a literary love child, she would be Lynn Freed — or, at least, the resulting book would be Lynn Freed’s essay collection, The Romance of Elsewhere, on sale from Counterpoint Press on Oct. 10. The collection of 20 previously-published essays spans decades and continents, and is in equal turns funny, wise, and sardonic; charting both Freed’s evolution as a traveler and her evolution as a writer. Travelers and readers seeking an unusually un-romanticized take on wandering the world will love it.

An award-winning author of fiction, short fiction, and essays, Freed connected with Bustle this month, in an interview about the collection, which in itself was as frank and wry as The Romance of Elsewhere itself. Freed reads as a seasoned traveler. She is also someone who has relocated from the South Africa of her childhood to her current, Northern California home; someone who bore witness to the shift of an entire culture: living in both apartheid and post-apartheid South Africa. I wonder if she has an idea of how much of her life she’s actually spent traveling — how many miles, how many countries — and if her passion for writing and her passion for travel connect.

“It’s hard to think in terms of miles when one is up in the air,” Freed says. “It’s more like days, weeks, months. I’ve never counted them up. I’ve gone fairly fully into the relationship between travel and writing in the title essay, [The Romance of Elsewhere]. It’s idiosyncratic. As to which came first, I’ve never thought of it in this way. But, now that I do, I see that I wanted to travel long before I wanted to write. I can’t remember wanting to write. I just wrote.”

The Romance of Elsewhere by Lynn Freed, $17, Amazon

In that title essay, 'The Romance of Elsewhere', Freed writes:

It is often supposed that the writer wed to travel is a writer in search of the self. But the opposite is, perhaps, more true: the traveling writer is someone seeking anonymity. Or even a sort of nonexistence, the quest for which can lead, paradoxically, to the discovery of the self set free from the bafflement of context.

In the same essay, she writes about imagining traveling like an Englishman — her then-desire to travel as adventurers like Somerset Maugham, Graham Greene, Lawrence Durrell, Robert Graves, and D.H. Lawrence did. When asked about traveling as a women, and whether growing up she felt any lack of influential women travelers, she notes: “I wrote a piece about traveling alone as a woman — in this case to Crete — which is included in the essay ‘Enough is Enough’. I loved traveling as a woman. I suppose I’d have loved traveling as a man, too. Or maybe even as a dog. It’s hard to know. The only place in which I ever had trouble being a woman alone was Rio.”

The world has certainly changed, both for women and travelers, in the decades since men like Graham Greene and D.H. Lawrence satiated their own wanderlust. With globalization, social media, Google Earth, I can order Japanese food, talk to a friend in Kenya, and click through images of Peruvian jungles without even leaving my desk. I ask Freed's opinion on why, then, we humans still travel.

"Armchair travel is quite a different phenomenon," she says. "It can be interesting, I suppose — watching a travelogue, on, say, Papua, New Guinea — but it’s quite different from the experience of actually being in Papua, New Guinea oneself. And Google Earth, it seems to me, is a new and fascinating view of geography — nothing to do with travel."

Unlike many travel memoirs and essay collections, Freed’s essays are centered around observations about people in places, less so about the geography of her wanderings — the sights, the sounds, the smells, the cuisine — of a place itself. When I ask her about this, she says: “What I like to write are essays, whether about an experience while traveling or about travel itself — something larger than go here, see this.”

The Romance of Elsewhere is described as “explor[ing] our most quintessential question: What makes a home?” I ask Freed if, through travel or through writing, she’s yet arrived at an answer to that question. She says:

“I think the question is more along these lines: ‘Where or what is home?’ To which I’d have to say, nowhere. Which is not to say there aren’t places in which I feel at home — Greece, for instance, and the African bush. I also feel at home in the past. And yet there is also a certain liberation in being untied from the past — from the bonds of home. And a sadness, a great sadness. As you see, I’m still looking for an answer.”

The Romance of Elsewhere by Lynn Freed, $17, Amazon

More like this
The Most Anticipated Books Of August 2022
By K.W. Colyard
The Best Enemies-To-Lovers Books To Read Now
By K.W. Colyard
The Biggest Differences Between 'Bullet Train' & The Book It’s Based On
By Arya Roshanian
'The Sandman’s Ending Is A Departure From Neil Gaiman’s Comic Book Series
By Kadin Burnett
Get Even More From Bustle — Sign Up For The Newsletter