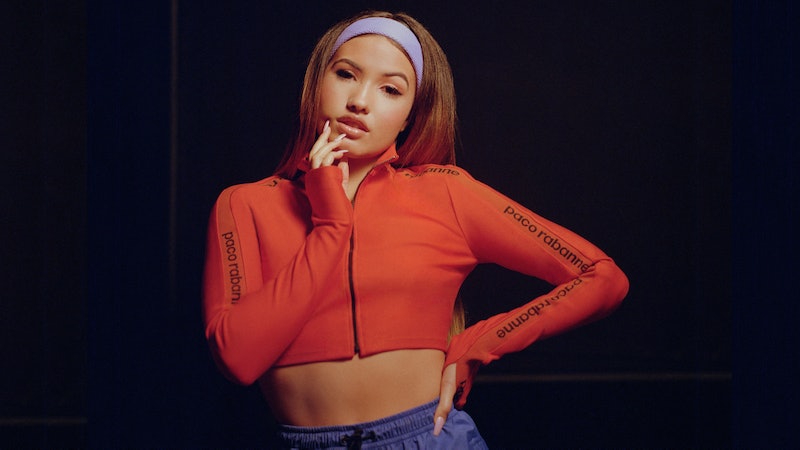 R&B singer Mabel’s ascent up the UK charts has been nothing short of unstoppable. First came "Finders Keepers," which became the soundtrack to the summer of 2017 and later stayed in the top 10 for five weeks. Then came 2018, which cemented the rise of the London-based singer-songwriter. In January, she scooped an MTV Brand New Artist Award, and by December she was performing a sold-out gig at the Brixton Academy, with her tracks "My Lover" and "Fine Line" becoming the unofficial songs of the summer en route.

Unsurprisingly, 2019 hasn't looked too shabby either. In January, she received a BRIT award nomination for best British Breakthrough Act alongside Ella Mai and Jorja Smith. All three may have lost out to singer Tom Walker, but it's impossible not to feel like this young crop of British women are having a moment. Her latest single, "Don’t Call Me Up," peaked at number three on the top 40, and a tour of the U.S. and the release of her much-anticipated debut studio album High Expectations will follow in August.

I think there’s great power in when I wake up in the morning, I decide how people perceive me.

If that sounds like a lot to take in in a short space of time, you'd be right, but Mabel has had advice from the best. Her parents are '80s hip hop star Neneh Cherry and Massive Attack producer Cameron McVey. While Mabel's success is undoubtedly down to her dance floor-filling vocals, rather than industry nepotism, one thing she does credit her upbringing for is giving her a global focus, which trickles down to her music and her style. Her childhood saw her live across Europe, from her birthplace in the mountains of Malaga, to London, and Stockholm, where she enrolled at the same music school where Tove Lo and Robyn cut their teeth.

But what does it take for Mabel to perform on sell-out stages? Ahead of her album release, we sat down to discuss getting stage ready, how her mixed race heritage is intrinsic to her sense of self, and the simple joy of over-lining.

On Dealing With The Pressure

From day one, Mabel’s made no secret of the pressures she’s faced as a young woman navigating an industry that’s rife with accusations of sexism. “I’ve had people be like ‘Her look is not sexy enough’,” she told Stylist when she made her first foray into music. Though Mabel does concede that female artists face unique pressures about their physical appearance that their male counterparts don’t, she insists that she rarely gives outside pressure any time.

“I feel very confident that when I like something and when I’m happy with it, it doesn’t really matter what other people think,” she tells me.

I think there’s great power in when I wake up in the morning, I decide how people perceive me. I’ve always been clued into that. I’ve never really followed any fashion ‘rules’. I like that I can wear a tracksuit with heels or a dress with trainers.

As it does for many artists, Instagram can feel like an added level of pressure. "I try to keep things real," she explains, adding that the psychology of the "highlight reel" can be "dangerous."

Mabel's highly distinctive style can be traced to two key sources of inspiration. “Where you are obviously affects you,” she says, noting that she's comfortable hopping between Stockholm-influenced, clean Scandi clothes, and her more experimental London style. "I guess [London's] just a lot crazier," she adds. "Most days, I’ll be wearing a crazy wig with loads of different colours. I’ve been quite colourful lately — I have all these different sides I can draw inspiration from."

Mabel’s yet to extend her adventurous spirit with fashion to her make-up routine, a look she describes as classic. “I always wear the same make-up on stage — it’s like my armour," she reveals. "I wear an eyeliner flick that really opens my eyes. I have very naturally bedroom, sleepy eyes so I have to have liner to open them up. I always wear a '90s lip liner to over line my lips even more. They’re already very big. I like to keep my face glowy and dewy.”

Mabel's long been vocal about the struggles she faced fitting in when growing up at music school in Sweden, compounded in part on account of the fact her friends were blonde while she was of mixed race heritage (her mum is Sierra Leonean and Swedish, while her dad is Scottish and English).

"I didn’t know who I was. It was difficult going through that as a teenager," she reveals. "I didn’t look the way what people thought was beautiful." She's significantly more confident now than she was in her teens, a hard-won achievement that she credits entirely to her mum. “[Mum] was like ‘you’re so beautiful’ and made such an effort make us feel proud of being mixed race and having all these different places to draw inspiration from,” Mabel recalls.

I always wear the same make-up on stage — it’s like my armour.

From fellow artists like Jorja Smith and RAYE — with whom she appeared on "Cigarette," plus Stefflon Don — to Meghan Markle, the first mixed race royal in the British royalty, mixed race identities in the UK have never been more visible. Their presence is much-needed in the public eye, Mabel stresses, not least as young girls can see themselves reflected back for the first time: “It’s important that there’s more girls representing and it’s important we’re out here so young girls have people to look up to in an [industry] that hasn’t always been [representative]."

“My outfits are all planned up to a month in advance. We’ll go through in advance all my outfits and check hair looks," she says. "My hair is pink now and it’ll probably be blue this weekend! I just have fun with my hair. The only thing that remains is my make-up [routine], that’s my signature look."

There's one other routine that Mabel always makes time for — those impeccable, long acrylic nails. If you follow Mabel on social media, you know they're constantly on show; from these neon yellow talons she sported on Instagram in Chicago when hearing her song play on American radio, to the "Fine Lines" themed pink talons she posted about on Twitter to celebrate her collaboration with Not3s. “I’m way more into good nails even more than make-up," she says. "I’m not a big fan of doing my make-up, [but] I like making sure my nails are on point. It’s a nice way of making a statement."

Mabel hasn’t entirely ruled out bringing her nail artist to the stars Izabelle Bellamy along with her on tour: “I haven’t been really away on tour for that long but I would love to. Whenever I have, I’ve had moments where I’ll have a day off [I’ll get them done]. She [Bellamy] does come to my house].”

It's not unusual to hear an artist — actor or singer — talk about using fragrance to help them get into character. "I switch it up depending on how I’m feeling," says Mabel of her choices. “I have a few. I like Tom Ford, I like Le Labo, I like the Glossier one."