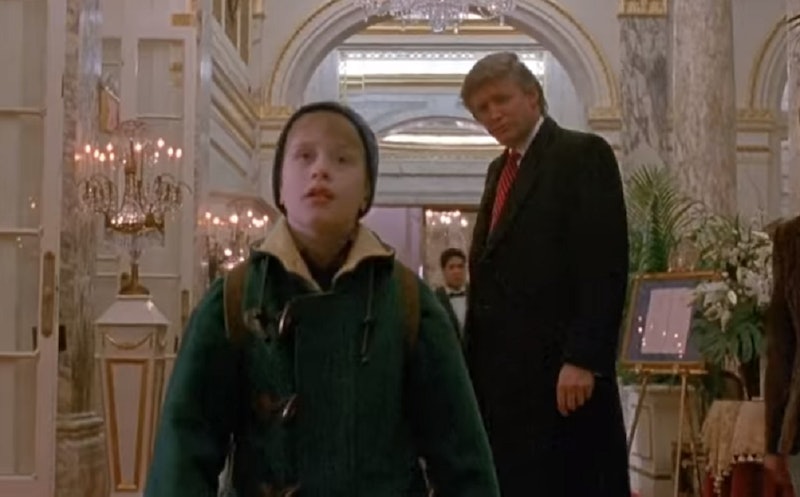 If you've long suspected that Macaulay Culkin isn't a fan of Donald Trump's cameo in Home Alone 2: Lost In New York, then congratulations: You were absolutely, totally correct. In a Reddit AMA earlier this week, the actor was asked which Home Alone movie is his favorite. According to the major '90s star, there were numerous factors as to why the first was a clear winner, but there was one in particular that stood out for him.

"The first one was more fun because we didn’t know what we were walking into and it was a lot less flying all over the place," Culkin explained before dropping some almighty presidential shade, "It was all in Chicago. It also had 100% less Donald Trump." Wow. Can someone send over an ice pack to the White House immediately, please? What a serious burn.

As you definitely remember but might not particularly like to, Trump made an unavoidable cameo in Home Alone 2 as himself. Culkin's Kevin McCallister — a young boy clearly wandering a gigantic hotel on his own — asks Trump for directions to the lobby which our current president is more than happy to do without a moment of concern for the young rogue. Trump squints eerily at McCallister as he walks away and that's it. That's his entire cameo. But let's all be honest, it was more than enough.

It's not like Trump's cameo in a beloved '90s property was a one-time thing, either. For a while, he showed up just about anywhere and everywhere you hoped he wouldn't — he was kind of like The Babadook of the business world in that respect. Just two years after his Home Alone 2 cameo, for example, Trump guest-starred in a 1994 episode of the Fresh Prince Of Bel-Air. In the scene, Trump appears as himself, casually walks into the Banks family's mansion and makes Carlton so excited he passes out.

That same year The Donald also appeared in The Little Rascals. This time he didn't play himself but rather the rich dad of one of the kids. It's worth noting that he wore the same suit for this "role" as he did for his cameo in Fresh Prince Of Bel-Air. Maybe they were filmed on the same day.

From there, Trump then went on to inexplicably star in Pizza Hut commercials — because clearly nothing is sacred, and enjoyed further cameos in shows like The Nanny, The Drew Carey Show, Suddenly Susan, and Spin City and in movies like Eddie, The Associate, Zoolander, and Two Weeks Notice where he hassles Hugh Grant's character at a party. He even showed up in Sex And The City as a friend of Samantha's 70-year-old lover, causing Carrie to narrate the odious line, "Samantha, a Cosmopolitan, and Donald Trump: it doesn't get more New York than that." New York of 2018 would surely beg to differ.

If you're wondering how and why Trump was such a popular background detail of so many '90s movies and TV shows, then an interview with Matt Damon might hint at an answer. Speaking with The Hollywood Reporter in January 2017, Damon suggested why Trump was such a prolific cameo star. "The deal was that if you wanted to shoot in one of his buildings, you had to write him in a part," the actor claimed before sharing an anecdote regarding Trump's lost cameo from Scent Of A Woman. He said,

"[Director] Martin Brest had to write something in Scent of a Woman — and the whole crew was in on it. You have to waste an hour of your day with a bullsh*t shot: Donald Trump walks in and Al Pacino’s like, 'Hello, Mr. Trump!' — you had to call him by name — and then he exits. You waste a little time so that you can get the permit, and then you can cut the scene out. But I guess in Home Alone 2 they left it in."

They certainly did, and now at least we know that Culkin might hate the cameo just as much as the rest of fans do.

More like this
The 'Hocus Pocus' Sequel Finally Has A Release Date & It Makes Total Sense
By Shannon Barbour and Radhika Menon
Hayden Panettiere Will Return For 'Scream 6': "We F*cking Won, Scream Fam"
By Jack Irvin and Jake Viswanath
David Schwimmer Doesn't Remember This Classic 'Friends' Episode
By Sam Ramsden
Laura Dern Said “Cultural Awareness” Made Her Rethink This 'Jurassic Park' Fact
By Grace Wehniainen
Get Even More From Bustle — Sign Up For The Newsletter