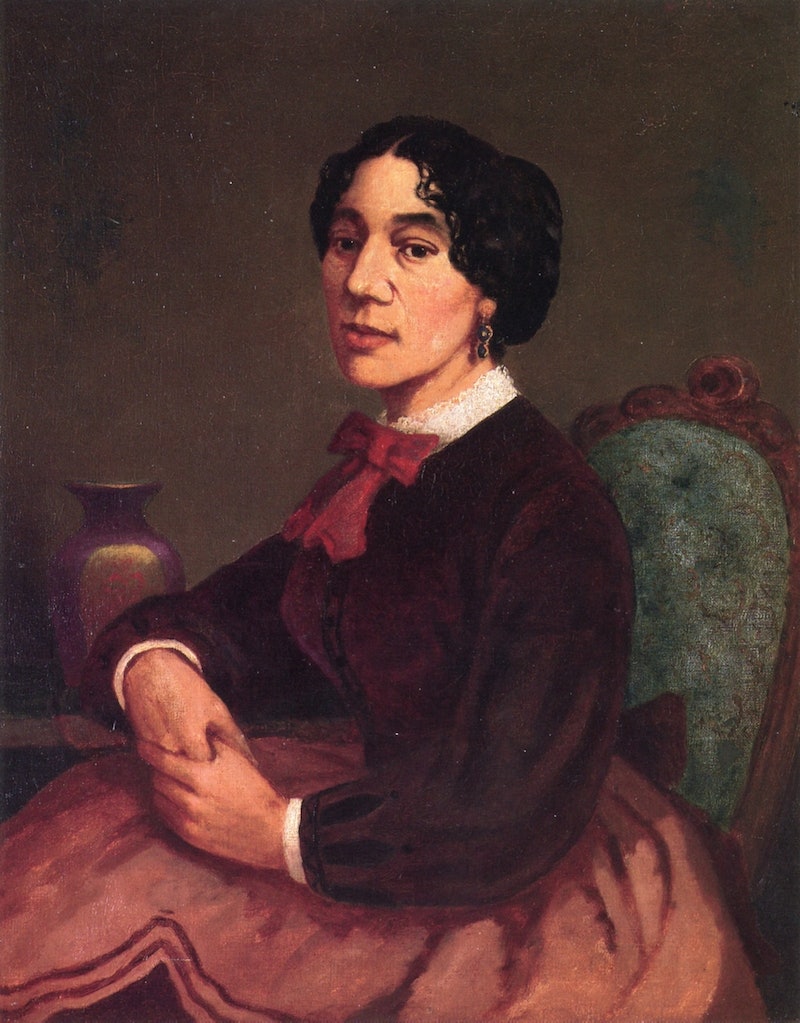 Courtesy of the Newport Art Museum
By Tatiana Walk-Morris
Feb. 9, 2018

During Black history month in grade school, you might have learned about Black beauty pioneer Madam C.J. Walker, who made millions from her haircare products for Black women. But she was not the only beauty entrepreneur to pave the way for Black women working today. Before Walker became a haircare millionairess, and even before Annie Turnbo Malone’s “Wonderful Hair Grower" also brought her substantial wealth, there was Christiana Carteaux Bannister.

You may have heard of her second husband, Edward Mitchell Bannister, who, after working for Christiana, became an acclaimed artist. But Christiana’s story is often overlooked. Over the course of her life, she ran multiple hair salons in Massachusetts and Rhode Island and leveraged her success to not only support her husband's art career, but also to uplift the Black community around her.

"Her role as a philanthropist and aiding the abolitionist cause is important, and [that] shouldn’t be understated. But her role as a business entrepreneur, a woman of color staking out a successful business career —even if that were in one place, that would extraordinary,” Peter Drummey, librarian for the Massachusetts Historical Society, tells Bustle.

But while her husband's artistic output is widely celebrated, few records of her life remain. “Her life has this arc of achievement that does very well for a while and then fades into obscurity,” Jane Lancaster, faculty fellow in the Center for the Study of Slavery and Justice at Brown University, tells Bustle. She was born Christiana Babcock in Rhode Island sometime between 1819 and 1820, and her parents were of Black and Native American ancestry, Lancaster wrote in a 2001 piece for the Rhode Island Historical Society. She got into hairdressing through family connections: Her brother, Charles, married Cecelia Remond, a hairdresser and member of a prominent family in Salem, Massachusetts. This in-law relationship was critical to Christiana learning the hairdressing trade and gaining connections among upper-class African Americans, Lancaster reported.

Before becoming a self-proclaimed “hair doctress,” Bannister worked in Boston as a hat-maker, during which time she was married to Desiline Carteaux, a clothes dealer, Lancaster says. (They split up by 1850, but experts, including Lancaster, aren't sure why.)

After learning the hairdressing trade, she ran a hair salon in Boston between 1847 to 1871, Drummey tells Bustle. Though hair salons of the period catered to men, Bannister advertised services to women in an 1857 advertisement placed in the Liberator, Lancaster reported. The advertisement aimed at women mentions that women would be “waited on at their residences, either in or out of town.” Hair salons for women were not common before the Civil War.

Not much is known about Bannister’s day-to-day life, Lancaster says. She didn't leave behind diaries or have children. We don’t know her exact net worth, though her style of dress, particularly during the middle of her life, suggests that she did well financially, Lancaster says. However, her success as an entrepreneur enabled her to support Edward Mitchell Bannister's artistic output, as well as fight racial inequality.

Edward Mitchell Bannister worked as a hairdresser in her shop after he settled in Boston in the early 1850s. Finding it hard to work as an artist, he also worked as a photographer earlier in his career. After the two married in Boston on June 10, 1857, Bannister’s salon earnings supported him as he established himself as an artist.

“I would have made out very poorly had it not been for her, and my greatest successes have come through her, either through the criticism of my pictures, or the advice she would give me in the matter of placing them in public,” Edward Bannister reportedly said of his wife in his later years, according to African American Lives, a collection of biographies of noteworthy Black Americans.

But Bannister was in a unique position to support a wide swathe of Black people in her community: She used her privilege as a middle-class female business owner to help less fortunate people of color in Massachusetts and Rhode Island. Massachusetts was the first state in the north to recruit Black soldiers, but Black soldiers who were willing to fight in the Civil War were met with pay discrimination, says Drummey. As Black men migrated from other U.S. states and Canada to enlist to supplement Massachusetts’ small Black population, they were paid $10 per month minus $3 in clothing costs, which was less than the $13 and clothing allowance that white soldiers received, according to Drummey.

Bannister's Boston salons had become a popular hub for Black and white abolitionists, according to Encyclopedia of African American Business. In November 1864, Bannister held a benefit for the soldiers who had opted to serve without wages instead of accepting the lower pay. Bannister's efforts, combined with those of the Boston Colored Ladies’ Sanitary Commission, helped to support the soldiers and their families as they boycotted the pay discrimination for more than a year, according to Hope & Glory: Essays on the Legacy of the Fifty-Fourth Massachusetts Regiment, a collection of essays which describe the 54th Massachusetts regiment.

Her efforts to uplift the Black community did not end following the Civil War. After moving to Providence, Rhode Island in 1869, she helped to create the Home for Aged and Colored Women, a nursing home for elderly Black women in Providence. The efforts to start the home, which would house Black women who often had worked as domestic servants, began in 1888, but the facility officially opened in April 1890. In a secretary’s report for the facility, Bannister is given an honorable mention for having raised $147.16 through donations or lifetime memberships, the highest amount collected by anyone that year, Lancaster reported. The establishment exists today as the Bannister Nursing Care Center.

Despite her success throughout her professional life, Bannister died with little money in January 1903. Though she was admitted into the Home for Aged Colored Women in September 1902, Bannister reportedly lived with mental illness and was transferred to the Howard Asylum, Lancaster reported. Upon her death, she was laid to rest next to her husband, who died in January 1901 during a church prayer meeting, without a grave marker.

But years after her death, she began to receive more public recognition for her contributions to society and Black history. Bannister was inducted into the Rhode Island Heritage Hall of Fame in 2003, and a bronze bust of her, based upon a portrait Edward painted, was placed in the Rhode Island State House in December 2002.

“Her legacy has continued for more than 100 years, which is terrific, but most people think [the Bannister Center] had something to do with Edward Bannister. But it wasn’t — it was her,” Lancaster says. “She’s illustrative of that small but emerging Black middle class in the middle of the 19th century. Her husband has a lot of name recognition and I always thought it would be nice to know about the people around these famous men.”

At a time when Black people, let alone Black women, weren't afforded many freedoms and didn't have much access to wealth, Bannister used her talents to support herself and achieve a middle-class lifestyle, a significant achievement in and of itself. But beyond being a Black beauty pioneer, Bannister used her influence to advance the Black community's struggle for liberation. Nearly eclipsed by her husband's shadow for years, Bannister is finally getting her just due.