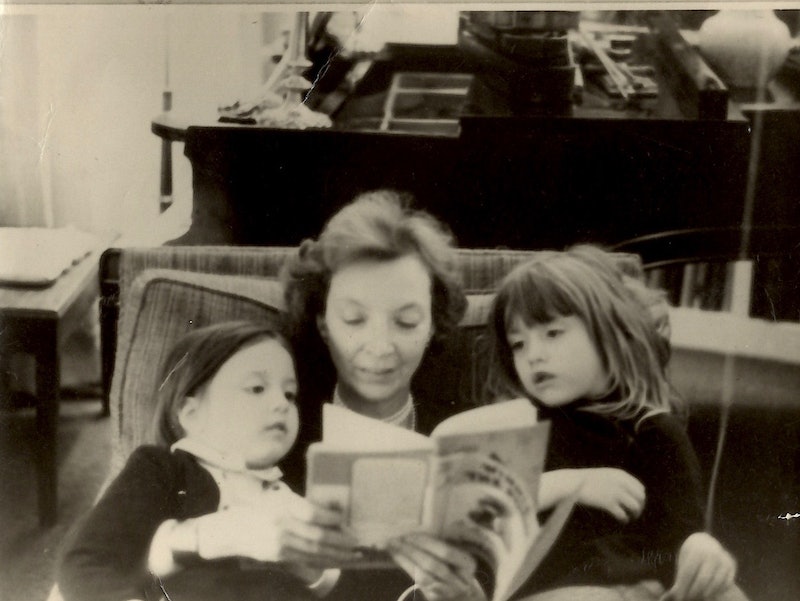 Author Madeleine L'Engle would have been 100 years old on Nov. 29, 2018. The author of over sixty books, L'Engle died at the age of 89 in 2007, but her work lives on in the hearts and minds (and Twitter feeds) of many. (Her most famous book, A Wrinkle in Time, was recently adapted into a movie starring Oprah Winfrey, Mindy Kaling, Reese Witherspoon, and Chris Pine). In an interview with Bustle, her granddaughters Charlotte Jones Voiklis and Léna Roy share their favorite memories of L'Engle on what would have been her centennial birthday. "My grandmother loved celebrating her birthday," Voiklis says.

This February, Voiklis and Roy published their biography of L'Engle, Becoming Madeleine. The sisters drew from the extensive materials left behind by their grandmother and great-grandmother to fill the book with journal entries, photographs, letters, postcards, and other original documents.

"We loved being able to incorporate her voice, because it felt like we were writing the book with her as well," says Voiklis. "And so really looking at the letters and journals and really understanding her vulnerability and her growth as a writer and mom. We knew her when she was older and she was already famous, and she was our grandmother. That hasn't changed, but one of the remarkable things about reading her early letters and journals is [realizing] 'Oh, she sounds the same, I recognize her.'"

"We loved being able to incorporate her voice, because it felt like we were writing the book with her as well."

"I loved the journal entries from when she was in boarding school in North Carolina, and just how her voice was still her voice," says Roy. "It was so her. It was 13, but it was still Gran."

Voiklis initially had some reservations about writing the biography; she was worried about the emotional repercussions of treating her grandmother as an academic subject, and she was concerned that working with her sister might affect their relationship. But she ultimately found her answer in a song from the Hamilton soundtrack: "Who Lives, Who Dies, Who Tells Your Story."

"It just struck me that, if not me and my sister [to tell her story], then who? And what a great gift it would be for her to work together and to tell her story," says Voiklis

The two women shared a close personal relationship with their grandmother growing up. "She was a very competitive ping-pong player. Very fierce," says Roy. "She was really good, because she really, really got into it."

But L'Engle also had a soft side. "She was also sensitive, very sensitive," Roy adds. "[She was] beautifully able to be vulnerable, but also really able to be hurt. She got her feelings hurt very easily. She had a thin skin."

Her sensitive side often made it difficult to endure the rejections she received throughout her career. She spent years writing before her first book, The Small Rain, was published in 1945. Despite being a published author, she struggled to find editors for her work for decades. "I think it's important for people to know and understand that she worked really hard. And she always had her own doubts and misgivings about if she was doing the right thing pursuing her writing," says Voiklis. "Even when she was successful, she needed and wanted good editors and readers and people to challenge her."

But Voiklis doesn't think the lesson from her grandmother's experience should be that after years of rejection she got famous.

"I think it's important for people to know and understand that she worked really hard. And she always had her own doubts and misgivings about if she was doing the right thing pursuing her writing."

Instead, she thinks the lesson should be about resilience. "In one of her books, she writes about her 40th birthday, when another book was rejected. In great resignation, she covered her typewriter and thought 'This is a sign. I should stop writing. I should learn to make cherry pie.'" says Voiklis. "And she walked around her room crying. And then she realized that what she was doing is she was feeling sorry for herself. She was working on a novel about failure in her mind, and she realized that it didn't matter if she never got published. Writing was something she had to do whether or not she was published. And she was glad she made that realization in a moment of failure rather than in a moment of great success, because it's easy to commit to something when you're getting affirmation."

She even had difficulty getting her most iconic work — A Wrinkle in Time — in bookstores. She was told by editors that the book would be difficult to categorize, and the manuscript reportedly received 26 rejections before it was finally published in 1962. "It's actually a wonderful thing that A Wrinkle in Time had such a hard time getting published, and that she refused to make changes that certain editors had suggested, because she wrote what she was called to write," says Voiklis. "She would say she listened to the work... A book came to her as a gift. And she didn't try to write for a particular audience or follow a fashion. She listened to the book that was given to her. And I think because she did that so honestly that the book stays fresh for people."

'A Wrinkle In Time' by Madeleine L'Engle
Amazon

L'Engle's books, particularly A Wrinkle In Time, continue to be enormously relevant, despite being written decades ago. "I do think that there's something going on at this particular moment [about] an angry girl, that makes people sit up and recognize and say 'me too,'" says Voiklis, referring to Meg, the main character in A Wrinkle in Time. "It's not just Meg's anger. It's this understanding and knowledge that darkness exists, evil exists, and each and every one of us has what we need to fight it."

"She listened to the book that was given to her. And I think because she did that so honestly that the book stays fresh for people."

"And I also think its important to recognize that it's not something that happens once," she adds. "What Meg has learned is that she can do this, and she's going to have to do it again."

Roy is also empowered by her grandmother's work. "She was a very hopeful writer," she says. "A Wrinkle in Time just leaves you with this message of love. Love through hardship, through all of the slings and arrows of life. She has a message of hope that I think is always relevant and always important."