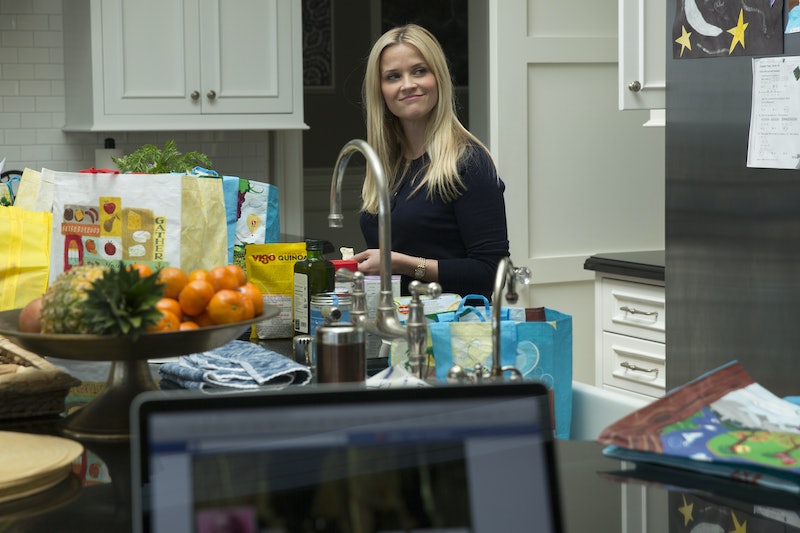 Aside from a change in location, Big Little Lies has mostly stayed faithful to the book it's based on — with one major exception. Madeline's extramarital relationship with Joseph came as a surprise to readers who thought we'd be able to predict every twist and turn this season, and the plotline was placed front and center in the March 19 episode "Once Bitten" after the pair got in a car accident while arguing about their future. As we approach the deadly Trivia Night, I'm even starting to wonder if showrunners tweaked the ending in some way. Could someone find out about Madeline's affair on Big Little Lies, and will it impact what happens when all the parents arrive at Otter Bay School for the fundraiser?

Thanks to the Greek Chorus, viewers know that a lot of people in Monterey were gossiping about why Madeline and Joseph were in his car together — and both Ed and Joseph's wife seem suspicious as well. Although Madeline told Celeste that she recently kissed Joseph, her best friend doesn't know about the affair, which apparently happened around a year ago. Up until this point, Madeline was the only character in her friend group who didn't have a major secret — but is this a big enough bombshell to change the outcome of Trivia Night?

The Joseph plotline definitely adds another layer to Madeline's character, but I doubt it will change the identity of the victim or the killer. In an interview with Variety prior to the premiere, Witherspoon (who is Big Little Lies' executive producer, along with Nicole Kidman) emphasized that staying true to the book was important to her — so it seems highly unlikely that she'd make a request to shake up the entire ending. Rather, it seems like Madeline's affair with Joseph was added in order to make the character a little less sunny and perfect. Witherspoon told Variety that she asked for one major change to her character's arc and explained why:

“Because I didn’t have anything to play but perfection, and I just think those people who are perfect [are] all full of sh*t. It mainly came out of me not having anything to really put my teeth into. I think there’s something fascinating about a person who projects perfection or is very judgmental of others who is clearly just swimming in their own discontent.”

The arc certainly lets viewers see Madeline in a new light — her marriage has consistently been depicted as somewhat passionless, but her infidelity still comes as a surprise because she's so fiercely loyal in every other area of her life. When she visits Joseph in the hospital, it's clear that she still has strong feelings for him and admits as much. Madeline tells him the reason she needs to walk away is because she has a terrible feeling that word will get out and destroy her family, but it's obviously painful for her to do so.

She'll probably eventually confide in Jane and Celeste, but this is one situation where I think Madeline will be happy to not be the center of Monterey's attention. Infidelity is definitely a pretty big secret, but it still pales in comparison to the ever-present violence (in flashbacks and present day) in the lives of Jane and Celeste — and there are only two episodes left in the series. So, I think the fallout from the affair is something Madeline will grapple with in private and it won't come into play on Trivia Night. But at this point, it's really anyone's guess — after all, everyone's secrets are fair game in Monterey.