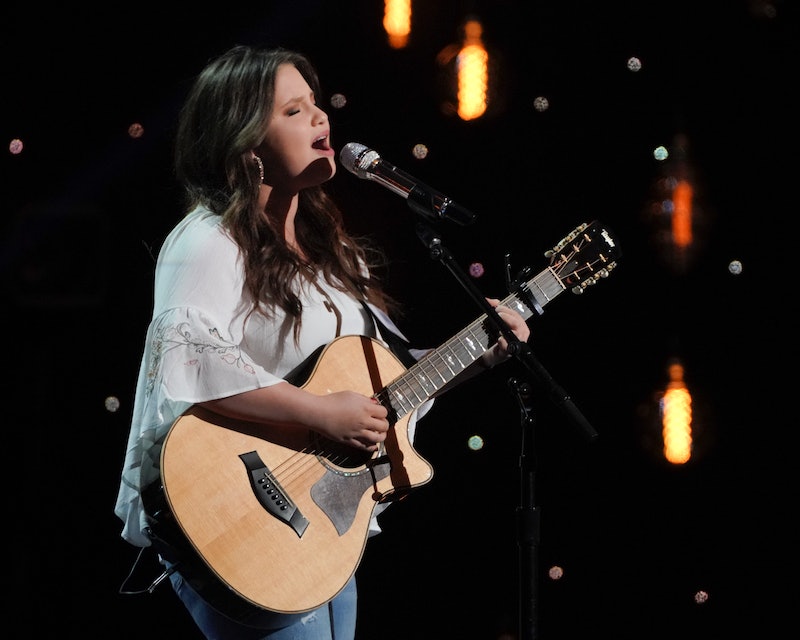 It all started with karaoke night and Celine Dion's "My Heart Will Go On." After American Idol contestant Madison VanDenburg sang that song in front of her friends and family when she was 10 years old, per her official Facebook page, she knew she had discovered a lifelong passion. Now, she's pursuing it on national television as she competes on American Idol Season 17. She blew away the judges with her cover of Dan & Shay's "Speechless" during her audition, after which Katy Perry said she could be the next Kelly Clarkson. Oh, and she's only 17.

Although she may have an easier time becoming the next Clarkson as a member of Team Kelly on The Voice, she's doing a pretty good job so far. As she said during her audition, she's been "gigging" all of her life, mostly at her dad's restaurant and around her hometown of Latham, New York. Now, she has a single out called "Need A Little Heartbreak" and is working on other songs for her first EP, according to her Facebook page.

VanDenburg's page further states that she has classical training under her belt and has been playing guitar and piano for most of her life, but singing has her heart. "Music has always been there for me when I needed it," she said on the show. "I just want to get to a place where I can share that with other people in the world and make it a better place." She shared the same clip on Instagram and wrote about how much music means to her. "Music has been my therapy since I was a little girl, and I’m so grateful to have the chance to share it’s power with the world," she wrote.

VanDenburg went on to Hollywood week, part one of which aired on March 24. After it wrapped, she posted a disclaimer on Facebook about her story. Her dad acts as her talent manager and was highlighted on the show as such. "Tonight, they focused on me and my dad's relationship and I loved sharing that with the world!" she wrote. "But I want to take time here to appreciate my mom as well because I feel like the way things were highlighted, she seemed vacant from my life and that's not the truth. My mom has been a huge part of my life for my entire life and has supported my music just as much as my dad." She went on to reveal the main reason her mom wasn't onscreen.

"The only reason she wasn't at my performances is because she has a serious traumatic fear of flying and couldn't take an entire month off to drive to L.A. from [New York]," she continued. "But she has been by my side whether it's thru FaceTime or phone calls or text messages every step of the way!"

For her Hollywood week Lines of 10 performance, in which groups of 10 share the stage and perform a mini-solo, VanDenburg embraced the Clarkson nod by belting a sample of the Idol winner's "Already Gone." She posted the clip on Instagram, thanking Clarkson for her influence. "@kellyclarkson you are such an inspiration to me- thank you for writing such a beautiful song," she wrote.

During part two of Hollywood week, which airs on March 25, VanDenburg and her competitors will debut a full solo performance. Then the judges will decide who will go home, and who will stay. We all know Clarkson didn't go home after week one, and hopefully for VanDenburg, her fate will be the same.