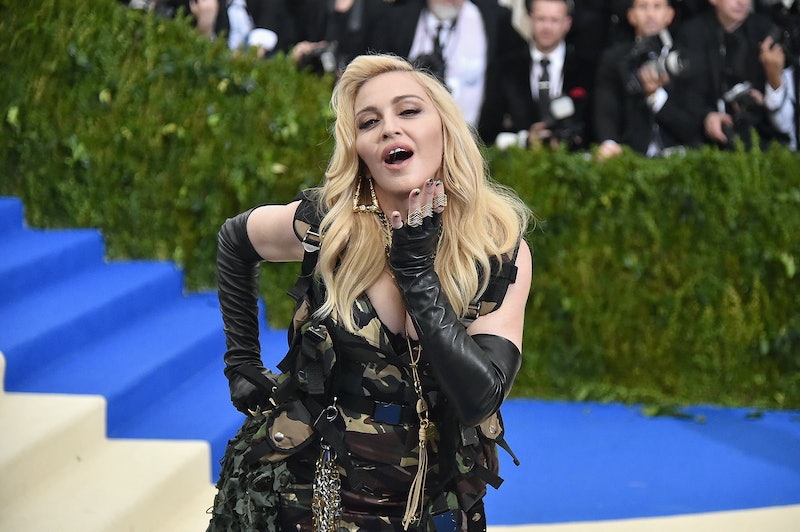 Madge is back, and this time she's decided to bring a few friends along for the ride. Well, kind of. On Sunday, April 14, Madonna teased her new album, Madame X, by posting a series of clips and pics on Instagram showcasing her secret agent alter egos, People reported. She also announced that "Medellin," the first single from the album, will be dropping on April 17, and will feature Columbian singer Maluma.

Madonna first started hinting at the title of Madame X on April 1, with a series of graphics on Instagram that came together to reveal a large red "X" on a black background. Shortly thereafter, she posted another series of graphics, which we now know served to explain the spy-theme concept.

"Madame X is a secret agent / Traveling around the world / Changing identities / Fighting for freedom / Bringing light to dark places," the description read. She then went on to list the many faces of Madame X: a cha cha instructor, a professor, a head of state, a housekeeper, an equestrian, a prisoner, a student, a teacher, a nun, a cabaret singer, a saint, and a prostitute.

Now, fans have gotten yet another glimpse into a few of her secret agent personalities. She also dropped a small snippet of some new music, so, yeah — there's a lot to unpack here.

The first new video showed Madonna — err, Madame X — sporting a tightly-shorn cropped black coif, wearing a sheer, polka dot dress, and strumming a few notes on a black and red guitar. The cha cha instructor, perhaps? While there's no sound on the video, the caption implored fans to wonder, "What song is Madame X playing."

The second new video shared a full minute of music and voiceovers, as well as more brief looks at her many alter egos. As the pop star reads over her previously listed identities towards the end of the clip, some of them appear to match up with the in-costume characters on the screen.

Well, except for when she says "the housekeeper," and the camera focuses on a blonde-headed Madge in a white strapless wedding dress, matching cowboy hat, and a single, red full-arm glove. Not exactly the most practical outfit for tidying up, but hey — no judgements.

The third new video is soundless again, and shows Madame X playing an accordion, and sporting a similar look as the (possible) cha cha instructor. Instead of a dress, though, she's wearing a black, silk blouse, fishnet tights, and no pants. "Madame X is a spy in the house of Love," the caption reads.

Then, on Monday, April 15, she posted three more pics that revealed her new single. The first and third pics simply said, "Madonna + Maluma," and "Medellin," respectively. The second photo showed the two stars together, with the assumed release date in the caption. Maluma is dressed in a fancy, ornate red velvet get-up, and Madame X — with one arm draped over Maluma's chest — is wearing her "housekeeper" disguise. OK, there's no way that's actually the "housekeeper" look, though, right? Guess we'll have to wait and see.

Madame X will be Madonna's first new album in four years, and it seems like she's managed to reinvent herself yet again. All of the content she's shared is pretty mysterious, but also super exciting — and it appears as if fans are in for one hell of a conceptual adventure.