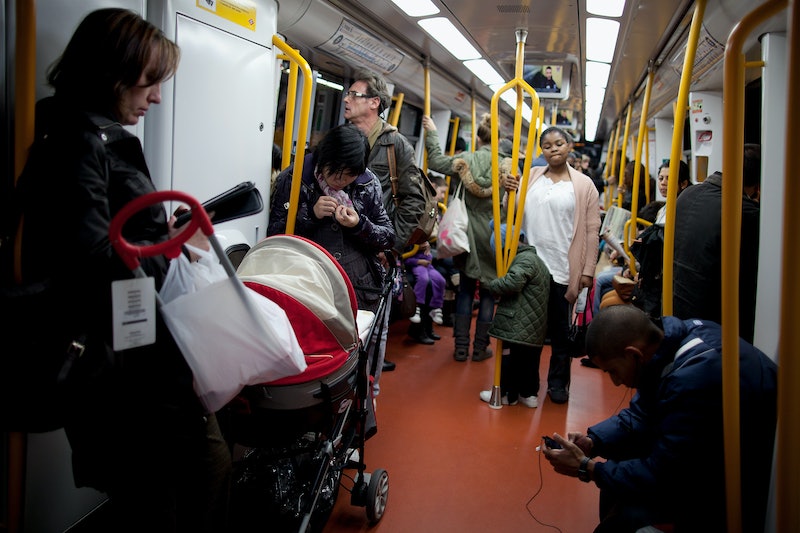 If you're fed up with manspreading, then you might consider a getaway to Spain. Officials in the nation's capital announced last week that new signs on Madrid public transportation would discourage manspreading on buses and metro trains. The signs seek to end the annoying practice of sitting with spread legs.

The signs, which have gone viral since their reveal, show a nondescript figure, seemingly male, sitting on a bus seat with legs spread far apart. The figure's legs clearly extend into the seating areas on either side of the figure's seat, thereby reducing the amount of comfortable space available on the bus. A red "X" in the upper left corner of the sign indicates that sitting in such a manner is prohibited.

According to the Diario de Madrid, the anti-manspreading graphic will appear alongside similar graphics that prohibit smoking, eating, drinking, and resting your feet on another bus seat. The new imagery reportedly realizes a proposal from two women's groups, Mujeres en Lucha and Madres Estresadas (which roughly translate to Women in Struggle and Stressed Mothers). A petition from the groups reportedly received more than 12,000 signatures, according to the BBC. The signs will first appear on Madrid's buses, but they will eventually pop up on Madrid's metro trains, as well.

In 2014, New York City's Metropolitan Transit Authority announced that it would use advertisements to discourage manspreading on NYC subways. Around the same time, public transportation users in Toronto called for a similar campaign to discourage the practice there, also. Madrid's new no-manspreading policy could renew such calls for policies around the world.

It wasn't just feminist advocates who received recognition from Madrid's transportation officials last week. As the city prepares to host international Pride Month celebrations, officials reportedly announced that traffic signals across the city would show gay and lesbian couples — along with other female figures — at street crossings, in place of the traditional (male) pedestrian icons. According to the Associated Press, the city paid some $25,000 to replace 288 lights at 72 street crossings. The LGBT-inclusive signs will remain in use even after Pride Month comes to an end.

With more than 3 million residents, Madrid is the largest city in Spain and the third-largest city in the European Union, behind London and Berlin. As such, the city has taken a noticeable and important step toward equality, through both the no-manspreading signs and the new pedestrian icons. The equality-focused campaigns could be exponentially successful if they start or renew similar movements around the world.