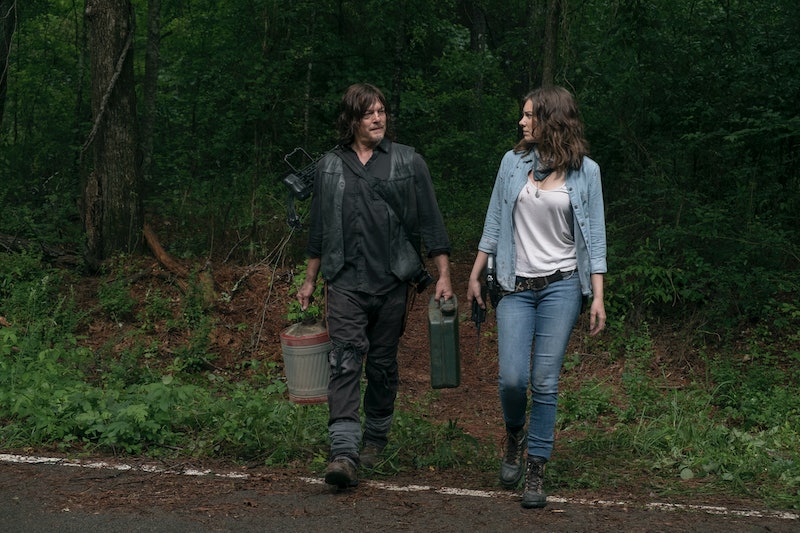 Rick's peaceful new world on The Walking Dead is ready to brim over with conflict, and Season 9 has only just begun. Not only does Anne/Jadis contact the helicopter that may or may not be connected to the evil Whisperers, but Saviors are getting picked off by other survivors who kind of have good reasons to take justice into their own hands — at least according to some of our heroes. What are Maggie and Daryl planning on The Walking Dead? "The Widow" is ready to see Negan and start doing things her own way.

At the end of Season 8, Maggie and Daryl (and Jesus) met in secret to discuss keeping some kind of watch or check on Rick's new regime overseeing various communities in the region. However, three episodes into Season 9 and the two haven't really spoken of mutiny — until now. While investigating the disappearance and death of Saviors, they discover that the women of Oceanside have been picking off their former oppressors and making them pay for what they did to the men of their community before Rick ever arrived at Alexandria or even met Negan.

But, murder mystery aside, an interesting moral debate takes place in the episode — one that is necessary after ever war, especially in a more or less lawless society. Should the Saviors pay for what they did to the other survivors? Can they really assimilate into communities with the friends and family members of their victims? Rick seems to think so, but Maggie and Daryl no longer agree. Following orders, and killing out of fear that you will be killed? That's one thing. But a everyone knows, the Saviors took a particular glee in torturing their victims and tormenting the survivors that is near impossible to forgive.

Maggie and Daryl catch the vengeful women about to take another former Savior's life. When the two of them hear how the woman being held at knifepoint once refused to spare a young boy's life, they turn their backs and let her be killed. Maggie had told Daryl earlier in the episode that Rick's "way," insisting upon peace and not holding anyone other than Negan responsible for the Saviors' crimes, was creating the best world for her son. After this encounter, however, she seems to have changed her mind.

Are Maggie and Daryl going to kill Rick? Could this be a full blown mutiny? That seems extreme. Maggie tells Daryl that it's "time to see Negan," and he agrees. But it doesn't seem as if Maggie wants to go see Negan for advice, or even closure. He was, after all, the man who murdered Glenn. Maybe they're going to kill Negan themselves, setting them up against Rick, who has been confiding in the villain. Maggie and Daryl more object to Rick's methods of justice than his leadership, after all.

As delightful as it is to watch Rick and Michonne roll around playing with Judith, those peaceful times are waning fast. Unfortunately, building a bridge is not strong enough to bring people together in harmony — as powerful a metaphor as that is. Maggie and Daryl's alliance may seem surprising on The Walking Dead, but it's hard not to admit they have a point.