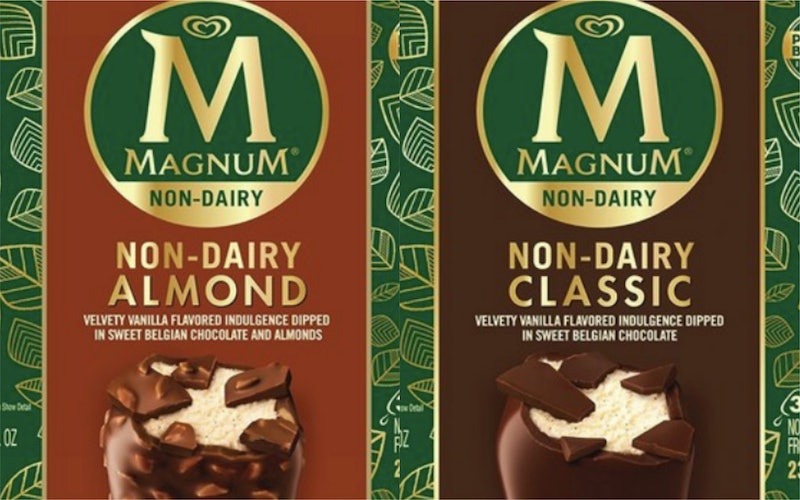 Vegans and fellow lactose-intolerant ice cream lovers, gather round. You've probably seen or heard of Magnum Ice Cream before — they have the big, golden M logo and make the best chocolatey ice cream bars in town (this is the kind of stuff you would probably stop in the aisle and beg your mom to get you as a kid). The brand is known for decadent white, milk, and dark chocolate-cased ice cream pops, but it's decided that it's time to expand even further: Magnum's vegan, non-dairy ice cream line was just launched in the U.S.

The all-new treats are Magnum's first-ever plant based frozen treats, made with non-dairy Belgian chocolate and a rich, vanilla base. They just debuted on Feb. 5, and the launch includes two delicious flavors: Classic and Almond (which includes the signature chocolate shell but with a nutty crunch).

Magnum Non-Dairy has officially been certified vegan by non-profit organization Vegan Action, which specializes in spreading awareness about veganism, introducing vegan food into schools across the nation, and certifying vegan products for companies across the U.S. The newest bars will feature cocoa beans sourced from Rainforest Alliance Certified farms along with creamy, non-dairy vanilla ice cream created with coconut oil and pea protein (a commonly used plant-based dairy alternative).

"This week we're thrilled to bring our next-level chocolate to the vegan and dairy-free market. This is our first launch in plant-based indulgence and we can't wait to share with Magnum ice cream fans," Leslie Miller, Marketing Director of Ice Cream at Unilever, said in a press statement. It's a big step, especially for fans of the brand who have had to forego it in the past due to dietary choices or restrictions. Ice cream that everybody can enjoy is the best kind of ice cream, after all.

The release of Magnum Non-Dairy products also includes a brand new green packaging that features a leaf design with the brand's signature gold coloring. If you want more info on the flavors, look no further: the Magnum Non-Dairy Classic will include "velvety vanilla flavored indulgence dipped in non-dairy Belgian chocolate," and Magnum Non-Dairy Almond will be pretty similar with the addition of almonds inside of the chocolate shell.

According to a press release, Magnum's brand new Non-Dairy line bars are now available in the non-dairy frozen and dessert sections of grocery stores and large retailers around the country. They come in packs of three, and you'll be able to pick up a box of your own for around $4.99-$5.49 (nothing better than getting your favorite treats without breaking the bank).

If you're now mysteriously craving a decadent chocolate ice cream bar, head over to Magnum Ice Cream's website to check out all of the different flavors that they have to offer — there are way more than you've probably seen in stores. In the meantime, all of us vegans and lactose-intolerant frozen dessert lovers can rejoice, because another brand has released delicious treats that we, too, can devour and enjoy. I'm sure you'll know what aisle to head to on your next grocery store run.