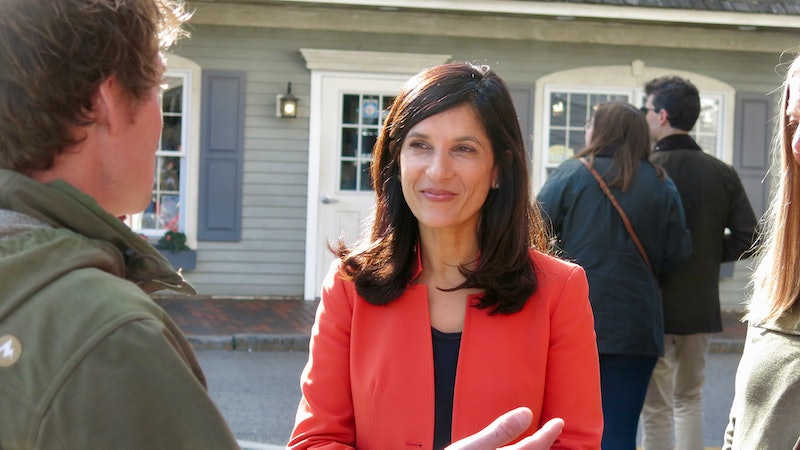 Sen. Susan Collins of Maine is up for re-election in 2020, and Sara Gideon is running to be the Democratic candidate to take her on. Gideon’s foray into electoral politics began less than a decade ago, when the mother of three came home to an answering machine message soliciting her husband Ben to run for town council. Gideon decided it was a job she could do instead. Her public service includes four terms in the Maine House of Representatives, two of them as speaker.

For Democrats, the stakes of the Senate race in Maine couldn’t be higher. As much buzz as there is around the question of who will be the Democratic presidential nominee, there is also the reality that should a Democrat best Trump, that individual’s ability to execute their vision will be determined in large part by their party’s success in flipping the U.S. Senate. To do that, Democrats will need to gain three or four seats. Collins has positioned herself as a centrist over her four terms in office, but her vote to confirm Brett Kavanaugh to the Supreme Court cost her support among moderate voters, made her a top Democratic target, and inspired millions in donations to unseat her before any Democratic opponent ever emerged.

Gideon is largely considered the most formidable of the three candidates running in the Democratic Senate primary. She raised over $1 million in the week following the launch of her campaign in late June, and $3.2 million in the third fundraising quarter. She’s known for championing Medicaid expansion, abortion rights, and bipartisan legislation to combat poverty.

But her status as the perceived front-runner in the primary has also brought unwanted scrutiny, in the form of an ethics complaint over the handling of reimbursements from Gideon's political committee.

Bustle’s Alicia Menendez spoke with Gideon about her motivation for entering the Senate race, where she stands on the Green New Deal and Medicare for All, and how she’d get work done in an increasingly polarized Senate.

Alicia Menendez: Your announcement ad, where you talk about your husband being recruited to run and your responding, “that sounds like a job for me,” made a splash. Why do you think it resonated with so many people?

Sara Gideon: I think a number of reasons. So, first of all, I think many of us have been in this position where the men around us, in our lives or in our workplace, are approached for things before we as women are. And this was one of those cases. For me it was really a call to action, of, “This is the role that I should be playing in the world and a place I can make a difference.”

AM: Walk me through the moment you realized, “OK, I’ve got to jump into this race.”

SG: I wish I could tell you that it was just one exciting moment. But as you know, it is an enormous decision to get into a U.S. Senate race. I, for years, to be honest, had been watching the decisions that Susan Collins as our U.S. senator was making and the votes that she was taking. But most especially in the years since Donald Trump became president, and feeling increasingly like at the moment that we needed a senator to stand up for us the most, that we needed this as a country, that we needed this as human beings. Particularly as women, I felt that she was just not rising to that task and not standing up for us.

So I began the process of thinking about whether I was the right person to stand forward and challenge her, and whether I would be able to actually stand up for us in the U.S. Senate the way I believe that we should be. That decision-making process wasn't just one moment in time, but really something that continued to build as the world and national events were happening around us.

SG: Ahead of her vote, I had been thinking a lot about Sen. Collins and the position she was in, especially as a fellow woman leader and imagining the pressure of that difficult situation. And yet every time I looked at what we saw about this judicial nominee, I thought, “Wait, she can't possibly vote for Brett Kavanaugh.”

I mean we could debate about how he would rule on the court and what this means for the future of Roe vs. Wade, which is a real threat. But I think that on top of that, and maybe even more concerning, what struck me was that his attitude and the anger that he displayed in those confirmation hearings really raised serious concerns about his fitness for a lifetime appointment on the Supreme Court. Quite honestly, like so many Mainers and so many Americans across the country, I felt betrayed by her vote.

SG: Look, there are a couple of things. One thing that really, really struck me about Sen.Collins and her 43-minute explanation for her vote was how she talked about sexual assault survivors. She thought that all sexual assault survivors should be believed, and yet Dr. [Christine Blasey] Ford should not in this case. That really felt like a betrayal.

In addition to that, when you have somebody who's a traditional nominee who is going through confirmation hearings with the U.S. Senate committee and they are unable to contain their anger, and unable to keep themselves from lashing out to the people who are asking them questions about a lifetime appointment to the highest court in the nation — it just seems like really a moment in time where she lost the ability to stand up for us as women and as human beings.

AM: Since Kavanaugh was confirmed, new sexual misconduct allegations have emerged. Are there grounds to impeach him?

SG: I don't really have a comment on that. I don't feel that I have the information at my fingertips to make a determination about that fairly.

AM: What information would you need to make a choice on that?

SG: I think this sort of gets back to the whole point that is the determination for the current U.S. senators. The initial decision to confirm Brett Kavanaugh to the Supreme Court, despite his display that he did not have even the temperament to be a sitting justice, is what should have prevented him from being confirmed in the first place.

AM: Let’s talk about two of the policies being heavily debated among Democrats. You’ve stopped short of supporting Medicare for All. Why?

SG: Well, because I believe that the best system for us to build on is the Affordable Care Act that exists. Making sure that we create the ability for people to buy in to the Medicare system if they want to, through a public option, but also allowing Americans who have private insurance and who want to keep it to be able to do it, I believe that is the best system for us.

SG: So here's where I stand on climate, and that is really what the Green New Deal is about, after all: It is facing the challenges that we have today in a forward-looking way, and climate change and combating climate change have been some of the issues that I have worked on most closely and with the greatest fervor during my years in the state House. In Maine we have passed goals to combat climate change that are really a model for exactly what we should be doing on the federal level. So when I think about how I want to combat climate change in the U.S. Senate, it is not about signing on to a resolution that was proposed in the past. It's about actually going in and taking action and getting things done.

So the things that I want to do around climate change include making drastic reductions to carbon emissions with clearly set goals, also making drastic increases to our renewable energy production, with clear articulated goals and dates certain for both of those things. It also includes overhauling our transportation infrastructure system and energy grids to make sure that we are modernizing, and doing it in a way that continues to build a bridge to renewable energy generation powering us in what we do. And through all of this, doing it in a way that is actually a) building the jobs of today and tomorrow, b) putting us as a country on the cutting edge of innovation and technology, and c) making sure that we are taking care of American workers at the same time.

AM: Sen. Collins has often been lauded for being willing to break with her party and be an independent voice. Are there places where you don't align with the mainstream Democratic Party?

SG: It's an interesting question and I don't really think about it in terms of the places where I align or don't align with any parties. Look, my time in public service started with being on a seven-person town council in my little hometown of Freeport, Maine. And I always go back to this, because the lessons that I learned there about how to do work and get things done in the best interests of people were based on sitting down around a U-shaped desk and getting it done without a letter next to our name.

When I went into the state legislature, it was those lessons that I took with me. It’s those lessons that allowed me to become really effective in the most difficult situations, whether it was working on the opioid crisis and finding Republicans across the aisle who would defy the Republican governor and actually do the work with me, or whether it was looking at massive solar legislation and bringing utilities and environmental communities and Republicans and Democrats together to get things done. I almost never approach something with just one policy prescriptive in mind, because my belief is if you're going to successfully get something done, then you do it by sitting down and hammering out the details at the table with people, even people who you think you disagree with or don't have that much in common with.

AM: I hear you. Yet, if you were elected to the Senate, you'd be entering the body during a period of extreme political polarization. So where do you see opportunities to bring people together?

SG: What you're saying is very true. It's a time that things are very polarized, but this is where my experience, working during the years in Maine that we have been most polarized, I think really comes into play. I think we have in Washington right now — whether we're talking about gun safety, climate, health care — we have come into a place where two extremes are being presented. And in fact, neither one of those are usually the right choice. What I know and believe, for example on gun safety, is that there are a majority of gun owners in this country who actually believe in smart gun safety laws and in making sure that we're protecting people at the same time that we're allowing people to exercise their Second Amendment rights.

More like this
Why Eurovision 2023's Host City Won’t Be Revealed For A While Yet
By Sam Ramsden and Rachel Mantock
Christina Aguilera Took A Powerful Stand At Brighton Pride
By Sam Ramsden
Are John Legend & Kanye West Still Friends? The Singer’s Latest Update Is Candid
By Brad Witter
We’ve All Had Bad Sex. Nona Willis Aronowitz Is Talking About It.
By Sophia Benoit
Get Even More From Bustle — Sign Up For The Newsletter