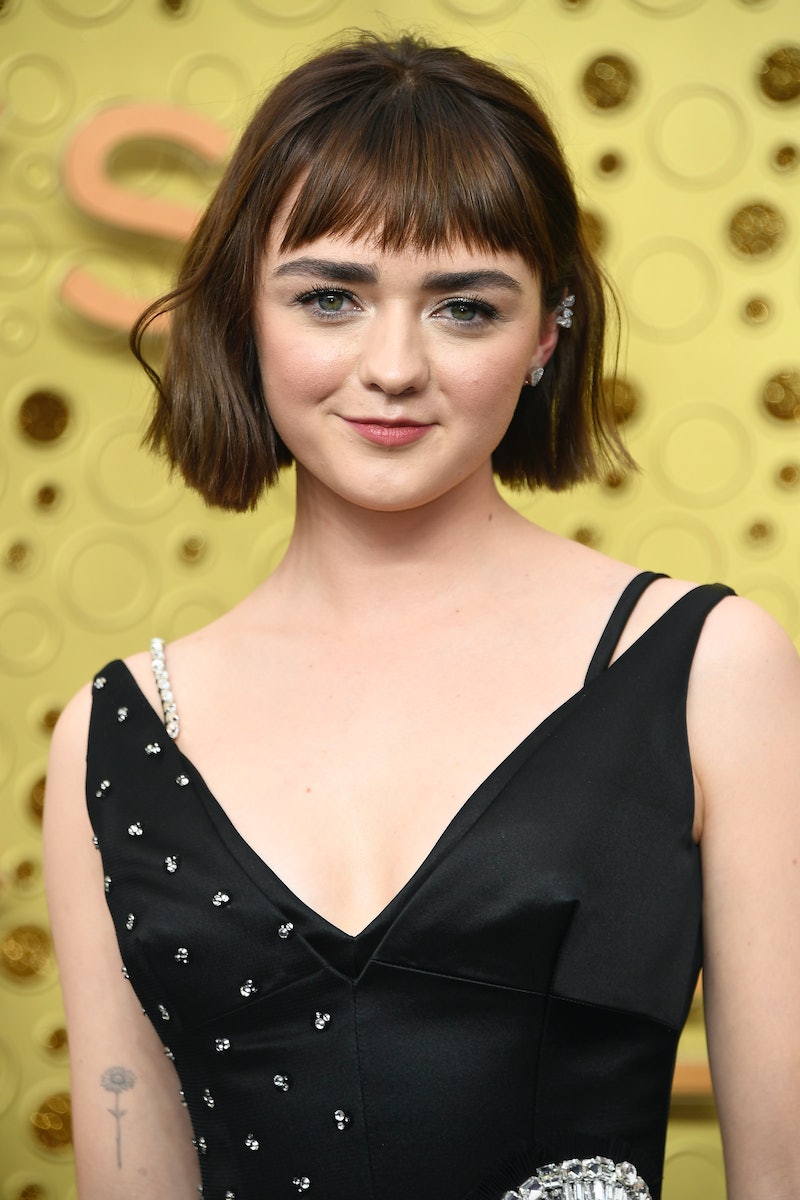 Game of Thrones' final season has aired, but its stars have unfinished business. Case in point: Maisie Williams, who was nominated for Best Supporting Actress in a Drama Series for her work as Arya Stark. Of course, she celebrated the professional accolade with a fashionable ensemble. Maisie Williams' 2019 Emmys dress was truly a "Wow" moment for the young star — and one that was much anticipated, since she skipped both the 2017 and 2018 ceremonies.

Williams wore an asymmetrical LBD that had two very different halves. The custom Reuben Selby design was made by JW Anderson, according to a press release from the brand. The dress was literally bisected right down the middle and looked like two different frocks that were sewn together. One half of Williams' gorgeous dress boasted sparkly silver stars and a sheer overlay. The other side boasted a singular, satiny texture, a longer hem, and a blingy, silver brooch on the hip. Even the skinny straps on each side of her dress were mis-matched. The dress was a, well, stark contrast to the looks of her character, who often wore military-like attire during the series' run.

Williams accessorized her darling dress with strappy black heels that featured matching crystal embellishments and some cuff earrings. She went with minimal jewelry, which worked well since the fabric and the flourishes of the dress functioned almost like accessories themselves. Her previous Emmy Awards appearances found her rocking statement accessories, like fluffy pumps or penguin clutches, and she went in a different but just as thrilling and fashion-forward direction this year.

For her makeup, Williams opted for shimmery lids with darkly rimmed lashes, rose-stained lips and cheeks, and strong brows. Williams is also known as a bit of a coif chameleon who changes her hair often. At the Emmys, she elected to rock a chin length bob with choppy bangs.

Williams and hairstylist Ryan Richman have been working together since 2016. Her 2019 Emmys look was "definitely collaborative," Richman — who partnered with Dove Hair to create the style — tells Bustle exclusively via email. "Maisie is very much a part of the process and loves to try new things. My favorite part about working for Maisie is her willingness to experiment with new looks. Maisie never comes into a big red carpet wanting natural makeup and hair. She's always looking to add some edge." Her wavy bob did just that.

Her Emmys look reflected the fact that she exploring a new phase of her career. "We wanted to take Maisie in a more mature direction as she is exploring new roles now that Game of Thrones has come to an end," Richman says. "The first step was changing her hair color from pink to a natural brunette."

Her natural brunette also made an appearance at the 2016 ceremony, which was actually the last time that Williams was nominated. Williams 2016' Emmys dress was a custom black floral frock with pockets from designer Markus Lupfer. She added skinny Christian Louboutin heels with ruffly, chiffon trim. She finished her look with a topknot bun and gloriously messy bangs, plus a fun pop of color from her green eyeshadow. Clearly, Williams likes to wear LBDs with a twist when she attends the Emmys.

However, at the 2015 Emmys, Williams wore a strapless and quilted pink midi dress with pockets by Ermanno Scervino. Once again, her footwear was fluffy and fabulous. It was also by Topshop, according to Steal Her Style. The actor has shown a preference for working with lesser-known but incredibly talented designers for Emmys red carpets.

2019 marked a welcome return to the Emmys ceremony for Maisie Williams. While her stint on Game of Thrones is in the rearview, fans are looking forward to her next career and red carpet moves.