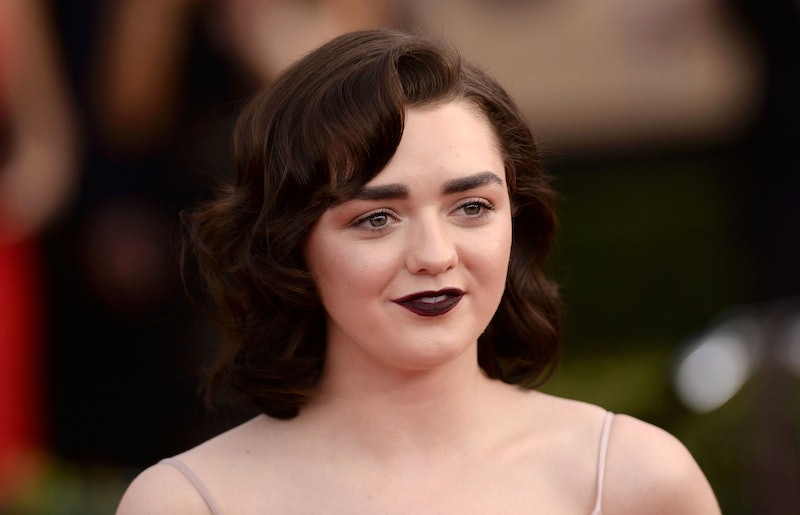 Actor Maisie Williams is best known for her role as Arya Stark in the HBO juggernaut, Game of Thrones. However, the young Brit is leaving her Night King-slaying days behind her and moving onto new pastures, because Maisie Williams is starring in Two Weeks To Live on Sky Comedy. But what is the new series all about? Here's everything you need to know.

According to the Hollywood Reporter, the six-part comedy series is described as "a comic tale of love and revenge born from a seemingly harmless prank that goes terribly wrong," and centres around Williams' character, Kim Noakes, who is described as "a strange young misfit." As reported by Variety, the character of Kim Noakes was just a youngster when her father died in strange circumstances, and after his death, she was taken away by her mother to live a secluded rural life, during which she learned some pretty unusual survival techniques. Later in life, Noakes sets out on her own journey into the real world, and by doing so hopes to honour her father's memory. However, after meeting a new group of friends, a prank ends up going horribly wrong, and their lives quickly end up being in danger.

According to Deadline, Two Weeks to Live was written by Gaby Hull, and Sky's Director of Comedy, Jon Mountague, has previously expressed his excitement surrounding the "very original" new series. He said, "with Maisie Williams leading from the front, Two Weeks To Live is to die for. Bold, British and very, very original, we can’t wait to wow audiences with even more great comedy." And Williams herself has also discussed joining Sky's upcoming comedy. She said, "Looking forward to getting into something new, I think Two Weeks To Live has really great potential and I want to make something incredible with this wonderful team!"

Two Weeks to Live will be one of many newly commissioned Sky series, as the broadcaster — which is now owned by Comcast — continues to increase investment into original programming. According to the Hollywood Reporter, other upcoming Sky originals, many of which boast an all-star cast, include the likes of Intelligence starring David Schwimmer and Nick Mohammed, Catherine the Great starring Helen Mirren, Breeders starring Martin Freeman, and the second series of In the Long Run, which stars Idris Elba

In addition to this exciting TV project, former-Game of Thrones star Williams has a range of new roles in the pipeline, and according to the Metro, fans can expect to enjoy the young actor in the 1990s-set thriller, The Owners, as well as the upcoming X-Men film, The New Mutants. However, fans could be waiting a little while longer, because as reported by Digital Spy, the X-Men spin-off has endured two major delays since the film's initial announcement. After New Mutants' first delay, Williams kept things positive during an interview with Collider, and revealed that having more time to work on the movie was actually a good thing. She said, "I think it's good that we've got more time. We're not so strapped and up against it. It gives us time — it gives me time to get to know the project once it's finalised."

In the meantime, Williams fans can look forward to Sky's upcoming Two Weeks to Live — and with filming set to begin this year, we could be enjoying the brand new comedy very soon indeed.