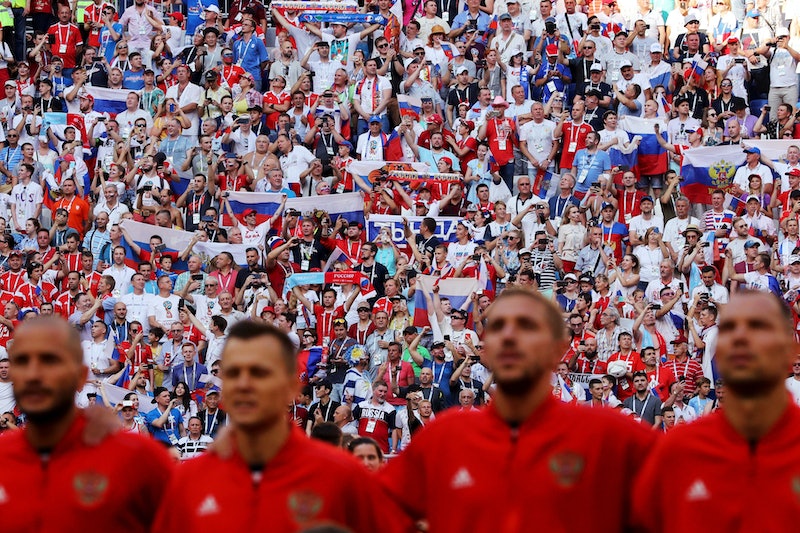 An estimated 3.2 billion people watched the 2014 FIFA World Cup in Brazil — nearly half the world's population. And when Croatia plays France in the final on Sunday, July 15, it's expected that over 1 billion people will tune in. But for many people, this major sporting event can be linked to domestic violence, especially if a "home team" loses.

Several different studies suggest that, when it comes to team sports audiences across many different countries, incidents of domestic violence appear to increase during games. In England, according to researchers at Lancaster University, domestic violence calls rose by 26 percent on days when the English national team played in the World Cup in 2002, 2008, and 2012. But when they lost, the calls increased by 38 percent. Another study in Calgary in Canada found that when the local football team were playing, calls increased by 15 percent, and by 40 percent when the team made the final and the stakes were higher. In Australia, State Of Origin rugby matches coincide with a 40 percent rise in calls relating to assault and domestic violence in the state of New South Wales.

But the real issue here, experts say, isn't the sporting event — it's abusive partners, period. “Domestic violence is systematic, patterned behavior on the part of the abusive [partner] designed to control" their partner, Sandra Horley CBE, chief executive of women's shelter organization Refuge, tells Bustle. "[Sporting events] — and the alcohol that tends to go with [them] — can be aggravating factors when it comes to domestic violence," she says, "but they are not the root cause."

At the same time, though, sporting events can provide a cover for abusive behaviors and patterns to manifest themselves. According to research by a UK academic who interviewed women who'd experienced domestic violence during sporting events, abusive partners may use sports games as a way to exert control over their partners. The abusers would set "rules" about whether their partners were allowed to enter the room, talk, do particular activities, or interrupt the game while it was on TV. Controlling behavior doesn't only manifest itself during sporting events, but major games or matches can create a setting in which controlling behavior can occur.

Another factor can be the presence of alcohol. Melanie Pescud from Australian National University writes for The Conversation that "a volatile mix of alcohol (and sometimes drugs), gambling, toxic masculinity, heightened emotions, tribalism and competition" make sporting events dangerous for people who are at risk for domestic violence. Scottish academics who researched the problem in 2014 called the prevalence of domestic violence during sporting events "the 'holy trinity' of sports, alcohol, and hegemonic masculinity."

That being said, however, it's important to note that a major sporting event doesn't necessarily mean an increased risk of domestic violence. "Domestic violence is a choice perpetrators make; and the vast majority of men who enjoy [soccer] do not choose to abuse their partners," Horley tells Bustle. "Blaming [soccer] or alcohol absolves the perpetrator of responsibility for his action." And domestic violence isn't just tied to games, either. “Women experience violence and abuse at the hands of their partners every day, not just when [soccer] is on the TV," she says. Statistics show that one in three women in the U.S. will experience some kind of intimate partner violence in their lifetime.

While sports can be a mechanism for abusive behavior to occur, the best route of prevention isn't banning sports events. Instead, it's important to support people who are at risk for domestic violence and those who are survivors of it.