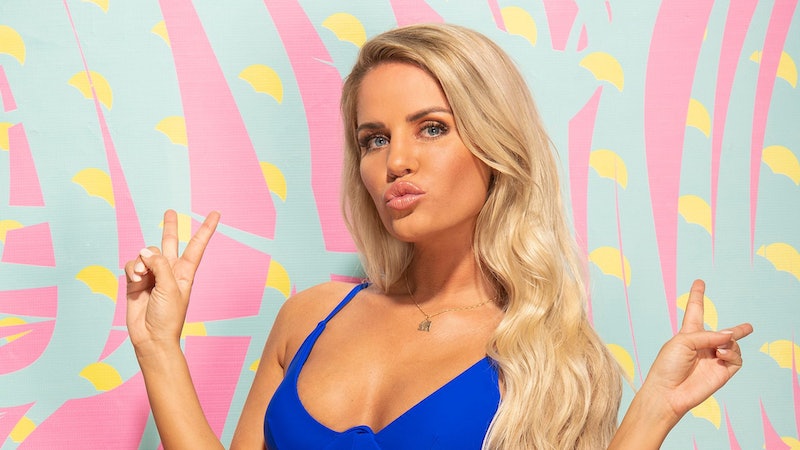 As one of the many contestants on Love Island U.S., Mallory Santic is ready for a summer of love. In fact, she may be the most prepared person on the show. In her intro video, she says she has her whole happily ever after planned out in her head: she's saved photos of her wedding dress and venue on Instagram, and has picked out names for her future kids. Now, she just has to find the right guy.

Mallory further explains in the video that her last serious relationship was five years ago, when she was still in college. Now that she's 26, she continues, she's worried about running out of time to tie the knot and start a family. Still, the self-proclaimed "wild child" isn't going to change her ways just to settle down with someone. "I'm gonna be myself," she says.

According to Mallory's LinkedIn page, she went to Washington State University, where she was a member of Alpha Phi sorority. She graduated in 2015 with a bachelor's degree in communication and media studies and went on to work as a production coordinator for Willamette Valley Bank, then as a corporate allocations assistant for Tommy Bahama. She now works as an equity opts analyst for Nike.

In her intro reel, Mallory says she feels like tropical birds represent her because "they can just kind of chill and be pretty and be cute and be majestic." She must have a thing for majestic creatures because she's also obsessed with mermaids, according to her CBS bio. She even has one tattooed on her foot.

As far as relationships go, Mallory seems to be a bit of a hopeless romantic, given that her Love Island also says her favorite holiday is Valentine's Day ("because she loves getting cards and candy") and her celebrity crush is ultimate love song lyricist John Mayer. According to her, Mayer "is the perfect man because he is intelligent, talented, and sooooo sexy." Unfortunately, it's very unlikely that he will be one of the other contestants on the show, so she may have to settle for someone else.

Based on Mallory's Instagram, it also seems like she enjoys a good selfie, loves the beach as much as she loves the cold, and may be pursuing modeling on the side. However, since the Love Island cast members aren't allowed to use their phones while on the show, we won't be hearing from her for a while: her last few Instagram posts are all written in third person, so she must have someone else handling her social media while she's looking for love (and competing for that cash prize). "Get ready for your new obsession! Mallory is going to be a part of the all new @loveislandusa cast!" reads a casting announcement post from June 30. Tune in next Tuesday, July 9th at 8 pm on @CBStv to see what happens!!"

Regardless of who's writing Mallory's 'gram captions right now, she's in for the time of her life. See how things shake out for her when Love Island premieres July 9.

More like this
'Love Island' Has Added Yet Another Bombshell To The Villa
By Bustle UK
This Pre-'Love Island' Video Of Olivia & Zara Together Changes Everything
By Bustle UK
Love Island’s Latest Winter Season Finally Has A US Release Date
By Grace Wehniainen
Molly-Mae & Tommy Fury Revealed Their Baby Girl's "Really Unusual" Name
By Sophie McEvoy and Sam Ramsden
Get Even More From Bustle — Sign Up For The Newsletter
From hair trends to relationship advice, our daily newsletter has everything you need to sound like a person who’s on TikTok, even if you aren’t.