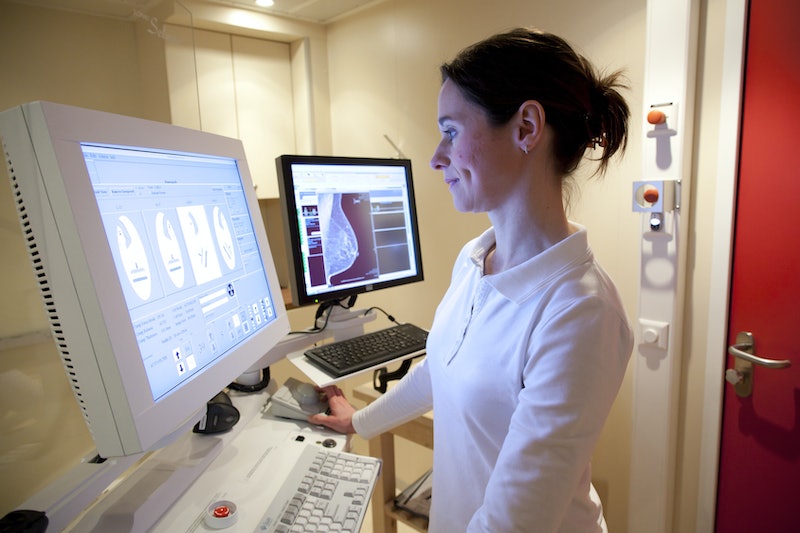 For people with breasts, most doctors encourage getting regular mammograms, which use low-dose X-rays to check breast tissue for abnormalities that could indicate breast cancer. Current guidelines from the American Cancer Society advise annual mammograms starting at the age of 45, and every two years over the age of 55. But do mammograms help breast cancer patients live longer? The answer, according to a new study published in the International Journal of Cancer, is no — and that may change how we view cancer prevention moving forward.

There's no question that breast cancer is dangerous. The Centers for Disease Control and Prevention notes that it's the most common cancer in women regardless of ethnicity, affecting nearly 125 women in every 100,000. Mammograms are designed to screen for cancer in its early stages, when it's easier to treat, but can lead to misdiagnosis and invasive surgeries or treatment, where surveillance or a less-invasive treatment might be more appropriate.

This new study adds to a body of research that suggests that the utility of mammograms may be overstated. Researchers looked at the entire female population of Norway born between 1896 and 1982. There has been a reduction in breast cancer deaths over the past few decades, the scientists behind the study say, but they believe it's due to better treatment, not mammograms.

The study looked at the cohort of hundreds of thousands of Norwegian women, divided them into age groups, and identified the ones who'd had breast cancer between 1987 and 2010. It compared deaths from breast cancer before and after the introduction of Norway's comprehensive screening program, in which women over the age of 55 are given mammograms biannually. Women who did get screened were studied alongside women who weren't because they were ineligible or outside the target age range. And there was a drop in breast cancer deaths deaths — but, the scientists argue, it doesn't seem to be linked to mammograms at all.

"The original randomized trials examining breast cancer screening were conducted way back in the 1980s, and they showed an effect, but the fact is that the better the treatment methods become, the less benefit screening has," lead author Professor Henrik Støvring said in a press release. While women who have been screened might know about their diagnosis early, they may not actually live longer as a result. "The women who are invited to screening live longer because all breast cancer patients live longer, and they do so because we now have better drugs and more effective chemotherapy," argued Støvring. "But it does not appear that fewer women die of breast cancer as a result of mammography screening."

The result is consistent with other research on mammograms, but other cancer specialists believe that women should still have the choice to have them. Katie Edmunds, a spokeswoman for Cancer Research UK, tells Bustle that the organization has chaired an independent review on breast screening.

"The evidence clearly showed that there are both benefits and risks to having mammograms," she tells Bustle. "We know that, even with our breast screening program, the great majority of breast cancers are still diagnosed by women finding a lump or noticing other symptoms and going to their GP. While breast screening can save lives from breast cancer by detecting it early, there are potential harms where cancers are treated that would never have caused the woman problems in her lifetime."

Women should make informed choices about their mammograms knowing these risks, says Edmunds. "Cancer Research UK believes all women eligible for screening should have clear, reliable information and should read the information booklet they receive with their invitation to screening when deciding if they want to take part.” And this new data may prove to be an important part of that information.

Mammograms will not cease to be part of the arsenal in our fight against breast cancer. But it's entirely possible that their use will be re-examined over the next few decades, to see exactly how useful they are and for whom.

More like this
25 Inspiring Quotes From Black Women To Celebrate Black History Month
By Kyli Rodriguez-Cayro and JR Thorpe
10 Primal Movement Exercises That'll Improve Your Mobility
By Carolyn Steber
Here’s What Health Means To People In 2023
By Isabella Biedenharn
How Many Burpees Should You Do Per Day? Here’s What Fitness Trainers Say
By Carolyn Steber
Get Even More From Bustle — Sign Up For The Newsletter
From hair trends to relationship advice, our daily newsletter has everything you need to sound like a person who’s on TikTok, even if you aren’t.