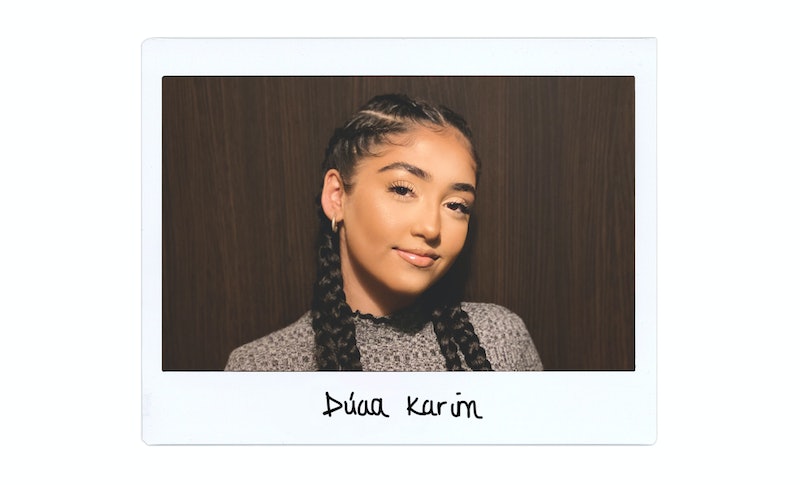 When celebrities hang out with Bustle editors, we want to give them the chance to leave their mark. Literally. So we hand them a pen, a piece of paper, a few questions, and ask them to get creative. This time, Man Like Mobeen star Dúaa Karim takes on the Bustle Booth.

Dúaa Karim is pretty wise for a 18-year-old. Speaking about her acting journey, she tells me: "I once upon a time thought acting would be impossible. But if you push yourself, you will literally get to the place you want to be. Rejection is one step closer to getting somewhere."

The young star has certainly proved her point with her continued success, most notably starring in Man Like Mobeen as the lead's teenage sister, Aqsa, and as Deepa in the Channel 4 hit Feel Good. And while comedy-led projects are her favourite things to be a part of, Karim has also turned her hand to more serious roles, such as the one in the upcoming short Going Country. "I can't say much, but it has a very important message about drugs and trafficking," says Karim.

But the Wolverhampton-based actor' real dream is to make it big in Hollywood: "I'd love to move there one day," she tells me. Project-wise, she'd love to be in a Marvel film, as well as "something that would involve singing, acting and dancing, like High School Musical, which is my favourite film."

Indeed, Karim is becoming as known for her singing voice (which she showcases via Instagram) as she is for her acting. She takes her inspiration from Ariana Grande, who she sees as "an inspiration and a perfect role model."

Karim, despite always having been creative, never really considered acting when she was younger. "I never thought it would be a possibility," she explains. "I'd never done acting before. But then I did an advert, then applied to Man Like Mobeen and got it."

Despite this initial thought process, it's fair to say Karim hopes for a bright future in the world of acting. She's still at school, studying three A-levels, but afterwards? "My heart is totally set on acting," she tells me.

As well as having a confident stance on the future, Karim has a positive attitude when it comes to approaching online hate. "I had so much hate when Man Like Mobeen series one came out. At first it was really hard as I was so new to it," she begins. "But I got through it with my family's support. And in the end, if I give them attention, that's exactly what they want. So I literally just ignored every single one. Just don't retaliate, and block them instead," she advises.

With this mentality, I have no doubt the young star will conquer Hollywood any day now. Watch this space.

Season three of Man Like Mobeen begins airing March 30 on BBC One at 10.45pm. You can also catch it on iPlayer. You can watch Feel Good on Netflix now.