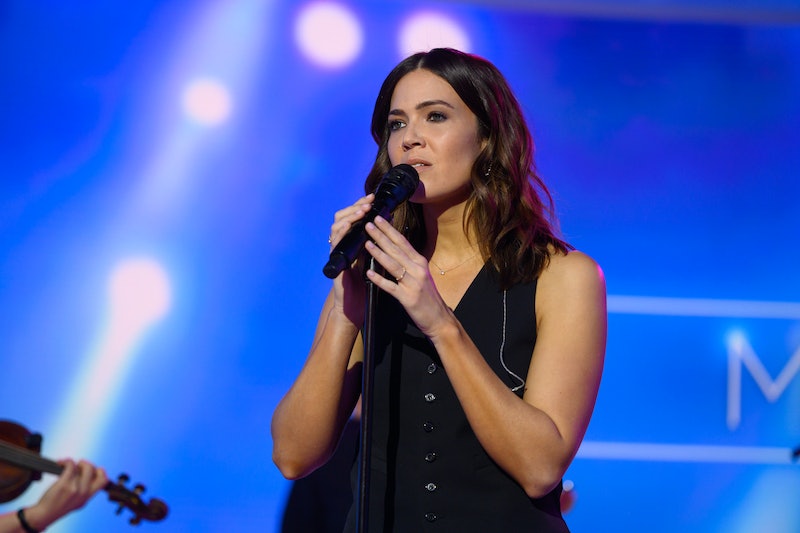 Mandy Moore just took a walk to remember down memory lane, and, lucky for us, she took her fans with her. Mandy Moore sang "Only Hope" from A Walk to Remember, her classic hit teen drama, during an Instagram Live concert on Sunday, April 5, as reported by Entertainment Tonight. And for those who get comfort from early 2000s nostalgia, the throwback performance is a must-watch.

During her Instagram livestream from home, Moore stripped the song down and belted out the emotional lyrics with her husband Taylor Goldsmith accompanying her on guitar. She remarked that singing the track over 18 years after its release felt "weird" but promised fans that she would "get it" eventually. However, Goldsmith felt differently, telling his wife that she "nailed it."

In the 2002 film, based on the Nicholas Sparks novel of the same name, Moore plays Jamie Sullivan, a sheltered teenager who falls for hunky bad boy Landon Carter, portrayed by Shane West. The issue that prevents their relationship from fully blossoming? Jamie has been diagnosed with terminal cancer. During the movie, as they set out on their unlikely romance, Jamie performs "Only Hope" for Landon during a school play, giving us all the feels — before "feels" were even a thing.

Moore is just one of many artists who have taken to online livestreams to put on virtual shows, keeping both fans and themselves entertained during the coronavirus pandemic. The Instagram concerts are especially sentimental to Moore's fans, considering that she just returned to music by releasing Silver Landings, her first album in over a decade. Unfortuantely, right as she was supposed to start performing concerts again, she was forced to postpone her comeback tour in support of the record.

While a Walk to Remember sequel is unlikely to happen (fans know why), the stars did reunite in March 2019 for Moore's Hollywood Walk of Fame induction ceremony and sang each other's praises. "Mandy, you are an absolute gem, your smile is absolutely ridiculous — seriously, it's ridiculous, and it lights up the room when you walk in," West told her. Moore was just as thankful during her speech, saying that West was "exceedingly patient, kind and so talented" when they made the film.

For fans who really want to go back to 2002, A Walk to Remember is not available to stream on any platform at this time, but you can rent on the movie on stores like iTunes or Amazon Prime Video for $3.99 — a reasonable price to pay for music, nostalgia, and cathartic tears.

More like this
The 'Hocus Pocus' Sequel Finally Has A Release Date & It Makes Total Sense
By Shannon Barbour and Radhika Menon
You Might Want To Rewatch 'Elvis' For This Britney Spears Easter Egg
By Grace Wehniainen
The Tragic Reason Elvis Never Toured The UK
By Sam Ramsden
Photos Of The 'Elvis' Cast vs. Their IRL Counterparts Will Have You All Shook Up
By Grace Wehniainen
Get Even More From Bustle — Sign Up For The Newsletter