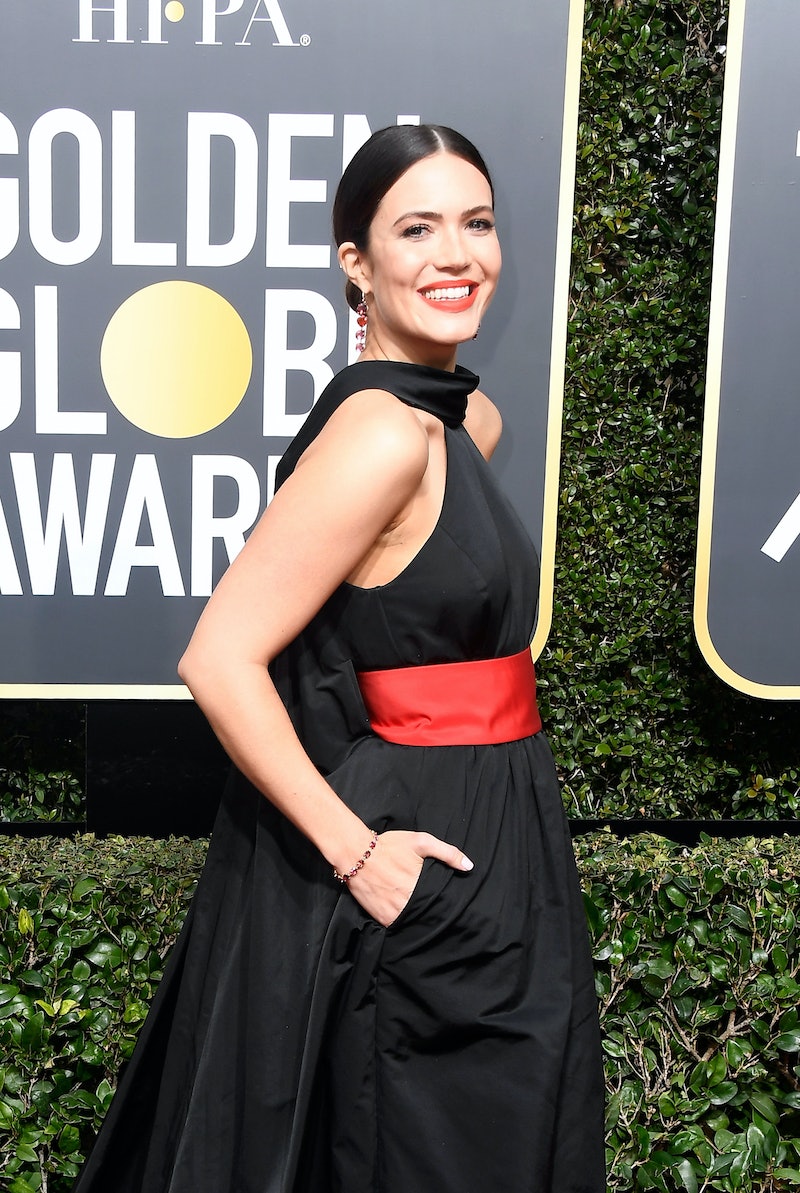 At the 2018 Golden Globes, This Is Us star Mandy Moore expressed solidarity with the Time's Up movement by wearing a black gown. And what a gorgeous dress it was, complete with its own twists — plural.

Fans and fashion watchers expected the actor, who was not nominated for her work in the popular series this year in a completely shocking snub, to wear the shade.

Ahead of the ceremony, it was widely reported that actresses would be wearing all black on the Golden Globes red carpet to protest the sexual assaults and harassment that have been taking place in Hollywood and other industries with hardly enough attention being called to the issue.

Also, Moore posted a note about the Time's Up/all-black initiative on her personal Instagram a few hours before the ceremony. So it was a foregone conclusion that she, too, would wear black. Let's not forget that Moore also wore a head-turning black gown to the 2017 edition of the Golden Globes. 2017 marked the first time the actor attended the ceremony since 2011 and she made an unforgettable return.

So, she wore back-to-back black — only this year, she was taking part in an important and impactful initiative.

Typically, black is avoided at Hollwood red carpet events. It's considered safe and doesn't make a bold statement nor does it pop on camera and in photos. But this year, black spoke volumes.

Moore opted for a flowing, charcoal gown with a halter neck and a red sash that not only added a pop of color but that also matched her classic, Old Hollywood red lipstick. Her MUA opted to paint her pout with Charlotte Tilbury's Hollywood Lips Matte Lipstick in Walk of Fame. The sash and her lipstick also matched her drop earrings. That was one of the twists.

The dress featured pockets and a train, while the back of the gown was embellished and had a cape-like quality. Details, details, details. That's likely why Moore's hair was swept into an updo — so she could show off her features, her ear-to-ear, room-illuminating smile, and the back portion of her frock.

No, really. Twitter was all about the pockets. Mandy Moore's pockets were having a moment and were the second twist to her dress.

This years's dress, by designer Rosie Asoulin, according to E!, was a stark contrast to her super daring Naeem Khan gown, which was also defined by details of an entirely different sort.

The Khan dress boasted a Grecian silhouette and featured a deeply dipping V that no doubt required the support of double-stick tape. It also featured a sheer, flowing cape that was more fashion-forward than it was superhero. Last year's dress had a straight silhouette but the bottom and the cape allowed it to flow about her body in a whimsical way. The serious color provided an excellent counterbalance to that supremely sexy, cleavage-baring V. Moore also opted for neutral makeup and a down 'do. The two major similarities between 2017 and 2018 are the color and how stunning Moore looked.

Twitter really loves Miss Mandy Moore. Her warm and inviting smile, her sense of style, and her incredible work on This Is Us are merely three reasons why.