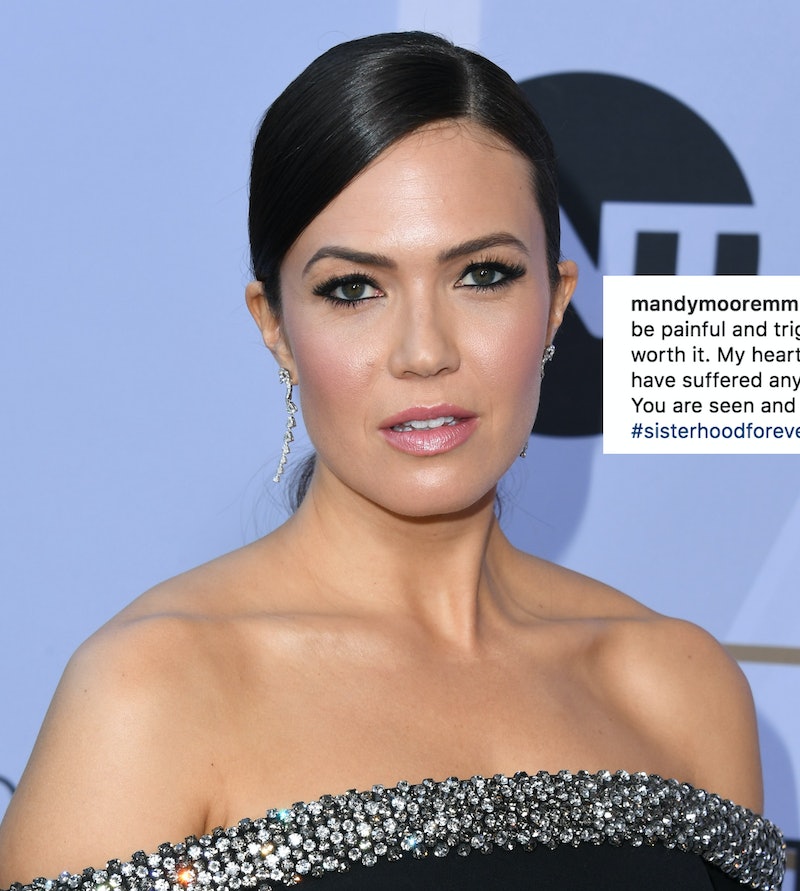 Three years after their divorce became finalized, Mandy Moore is speaking out about what her marriage to Ryan Adams was like behind the scenes. In an exposé published on Wednesday in The New York Times, Ryan Adams was accused of psychological abuse by Moore and other women, especially in relation to their musical careers. A few of the women accused Adams of sexual misconduct as well. (Adams' lawyer denied all claims to the Times.) Following the report being published, Moore posted an Instagram about the Adams allegations and voiced support for the other women involved.

Late on Wednesday, Moore shared a photo from the Times article on her Instagram, along with a few words about what it meant to her to talk about her former relationship with Adams publicly. She wrote,

"Speaking your truth can be painful and triggering but it’s always worth it. My heart is with all women who have suffered any sort of trauma or abuse. You are seen and heard. #sisterhoodforever"

In the Times piece, Moore opened up about how, after meeting Adams in 2007, they began collaborating. At first, she said that in 2010, when she stopped working with her music manager, she claimed he encouraged her not to find someone else, instead causing her to rely on him for advice. She also claimed that he would write music with her that he'd never record, and that he'd replace her with other female artists on projects they were working on together. At the same time, Moore claimed that he would also put down her talent, and Moore hasn't released an album since.

“He would always tell me, ‘You’re not a real musician, because you don’t play an instrument,'" she said, later adding, "His controlling behavior essentially did block my ability to make new connections in the industry during a very pivotal and potentially lucrative time — my entire mid-to-late 20s." Adams' lawyer, Andrew B. Brettler, told the Times that what Moore said of her ex-husband is “completely inconsistent with [Adams'] view of the relationship," and he denied that Adams ever kept Moore from working with anyone or tried to thwart her from developing her career.

Moore isn't the only woman who shared a story like this. A woman named Ava also claimed to the Times that after Adams discovered her talent for playing bass on Twitter at just 14 years old, they allegedly exchanged sexually-charged text messages, with Adams allegedly exposing himself to her during phone sex on Skype. Adam's lawyer denied this accusation, saying, "Mr. Adams unequivocally denies that he ever engaged in inappropriate online sexual communications with someone he knew was underage."

Musician Phoebe Bridgers also claimed to the Times that while she and Adams originally had a working relationship when she was 20, it blossomed into a romantic one that quickly got out of hand. According to Bridgers, Adams began demanding that she prove where she was when they weren't together and that he allegedly threatened suicide if he didn't answer her. When they broke up, Bridgers said that Adams ended their professional relationship as well, including his offer for her to open for his concerts.

In addition to his lawyer's comments, Adams responded to the claims in the Times piece in a series of tweets that he shared on Wednesday, saying that the way he was represented was "upsettingly inaccurate." He wrote, in part:

"As someone who has always tried to spread joy through my music and my life, hearing that some people believe I caused them pain saddens me greatly. I am resolved to work to be the best man I can be. And I wish everyone compassion, understanding and healing."

It may have been several years since Moore released new music, but her career has been thriving, especially with the success she's found starring in This Is Us. And now that she's said that she won't let Adams get in the way of her music, it seems like fans have a lot to look forward to in the future.