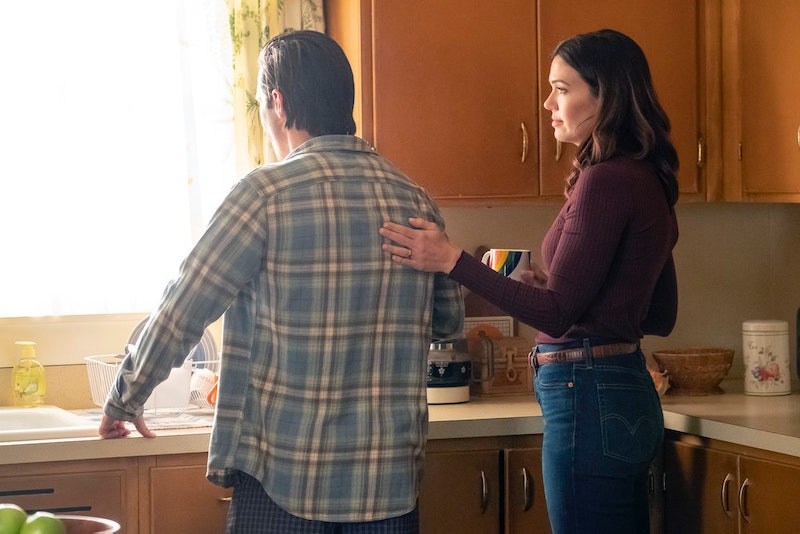 Rebecca and Jack Pearson have one of the most romantic love stories on TV. But their relationship is far from perfect — and Rebecca Pearson herself wouldn't have it any other way. Mandy Moore loves that Rebecca and Jack's relationship isn't perfect on This Is Us, she shared in a new video for the Today show. And her reasons why make so much sense.

Moore shared with Today that her favorite scenes to shoot on the NBC drama are the ones featuring Rebecca and Jack in the 1970s. "Just watching them, kind of clumsily, come together, it wasn't this perfect romantic storybook fairytale," Moore said of the two characters.

"I love that there was this reality of, Here's a man who's just back from war and has PTSD, undiagnosed, doesn't know how he's feeling, or why he's feeling what he's feeling. And a woman who's desperate to break through that," Moore added. "I love that we were able to, sort of, work that out in that particular episode."

Moore's comments, and her sympathy with Jack's character, emphasize the imperfect reality of the couple's relationship. Fans have seen from the beginning that Rebecca and Jack had their fair share of disagreements, especially when they became new parents. But Rebecca consistently emphasizes to her children what a good man Jack was to their family, long after his death.

And in terms of the PTSD Moore mentioned, the Pearsons have been learning a lot about their late family patriarch in recent episodes. Fans will remember Jack telling Rebecca that he had a brother who died, when they first started dating. But when Kevin and Zoe travel to Vietnam, they learn that's not the case, and that Nicky is still alive.

In the show's most recent episode, "Songbird Road, Part 1," the Big Three visit Nicky in Pennsylvania, at the same address where he's lived since Jack died. After some goading, Nicky tells them the horrific truth about what drove the two brothers apart. Nicky accidentally detonated a grenade in front of a child in Vietnam. As he tells the Pearson siblings, he "never got to tell" Jack that it was an accident (and that he wasn't purposely trying to kill women and children during the war).

Still, Nicky's actions were irresponsible, and it's clear that he regrets the experience into his old age. When the siblings go back to Nicky's trailer, they stop him from shooting himself, evidently out of regret.

"I think there's a lot of emotions that have been stirred up with the fact that Jack's brother is actually still alive, that he has been alive," Moore said during the Today interview. "So that, I think, is bound to be a super emotional couple of episodes." Rebecca and Nicky haven't met yet on the show, but based on Moore's comments, it sounds like that could change soon.

Moore also shared in the Today interview that she, like many fans, was "emotional" watching Kevin visit Vietnam and walk through the same places his father had been stationed. Even though she's an actor on the show, she's not immune to all of the feelings This Is Us evokes among viewers.

The actor's comments shed light on some of what she's feeling as she portrays Rebecca on the series. And it sounds like Moore does sympathize with Jack's not telling his family about his brother, even if the discovery was a shock to them. Jack's lie is, on one hand, an example of how his and Rebecca's life wasn't a fairytale, as Moore mentioned. But it also shows how complex their family's dynamic truly is. And even though Jack is no longer with them on earth, his family is getting to know a new side of him.