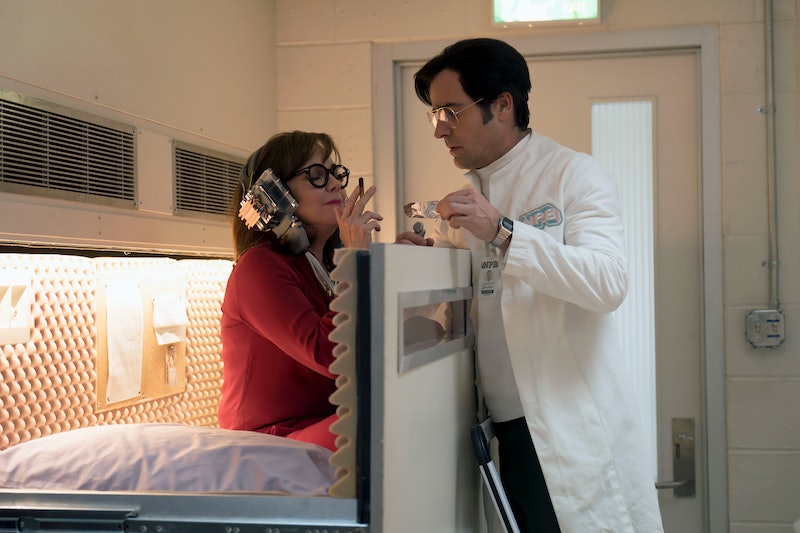 Maniac is, at its core, a show about trauma, loneliness, and the lengths we'll go to get rid of them. It tells stories about the ways in which people attempt to become better versions of themselves, but also turns an eye to those trying to profit from their vulnerability. Ultimately, what Maniac says about mental health is complicated, suggesting that healing isn't always reliant on the treatment itself, but rather the people involved in it.

The show uses the Mantleray family to examine two extremes. On one end is Greta Mantleray, a narcissistic author who sells self-help in lieu of therapy; On the other, her son James, an emotionally unstable scientist who builds a supercomputer named GRTA in her image, hoping to, with it and three magic little pills, rid patients of their mental anguish in the course of just three days. Ultimately, both come up short.

In the midst of a medical trial testing James' treatment, GRTA begins malfunctioning after the death of Dr. Robert Muramoto, with whom she'd forged a close relationship. Unable to cope with her own grief, she goes off-script, attempting to trap Annie, Owen, and other participants inside their subconsciouses in order to keep her company. GRTA is supposed to be a fail-proof healer, unburdened by any personal baggage, but even she's unable to see past herself. In trying to become more human, she's left at the whim of the same emotions affecting the doctors she was meant to replace. This doesn't make her much different than her creator, Dr. James K. Mantleray, who, despite his best attempts, can't seem to separate his own emotional turmoil from his work.

The real Greta Mantleray, meanwhile, peddles the same promise of happiness, but instead of medication, her methodology is changing the way one thinks. Like GRTA, her approach is positioned as a catch-all fix; It works for her, so it must apply to everyone else, too! But while Greta's career is built on making people feel better, she proves to be needlessly cruel, attacking those around her with no concern for their well-being. In Greta's world, the only way to be your best self is to ensure that, in your mind, you're better than everyone around you, regardless of what others think. Considering, however, that Owen had already read all of her books prior to the trial, it seems that Greta is far better at making money than actually helping people change.

Maniac, then, suggests that the reason neither of the Mantlerays' miracle cures work is that the people administering them are flawed. All of which raises the question: Can we really help each other when we can't even help ourselves? The show doesn't give a conclusive answer, but it does offer some solace. Ultimately, it's Owen and Annie — two people who don't try to bypass their flaws, but are instead painfully aware of them — that are able to help each other the most.

While the trial may have, if inadvertently, pushed its leading pair to confront their traumas, Maniac shows that there is no set path to getting "better." Mental health is not ticking off boxes on a checklist to get to some perceived "normal." Sometimes it involves medication, sometimes it involves therapy, and sometimes it involves a combination of the two, but most of all, it's about asking for help. The series makes clear that treatment is only as effective as those who give it, and that simply going through the motions will never be enough. True healing boils down to one key step: The willingness to do it.

More like this
Kenan Thompson Pointed Out A Super True Detail About 'Friends' In His Emmys Monologue
By Grace Wehniainen
What’s New On Netflix: Ana De Armas’ 'Blonde' & A Nick Kroll Special
By Arya Roshanian
What’s New On Netflix: Meet 'The Real Bling Ring'
By Arya Roshanian
Here’s Everything Coming To & Leaving Netflix In October
By Jake Viswanath
Get Even More From Bustle — Sign Up For The Newsletter