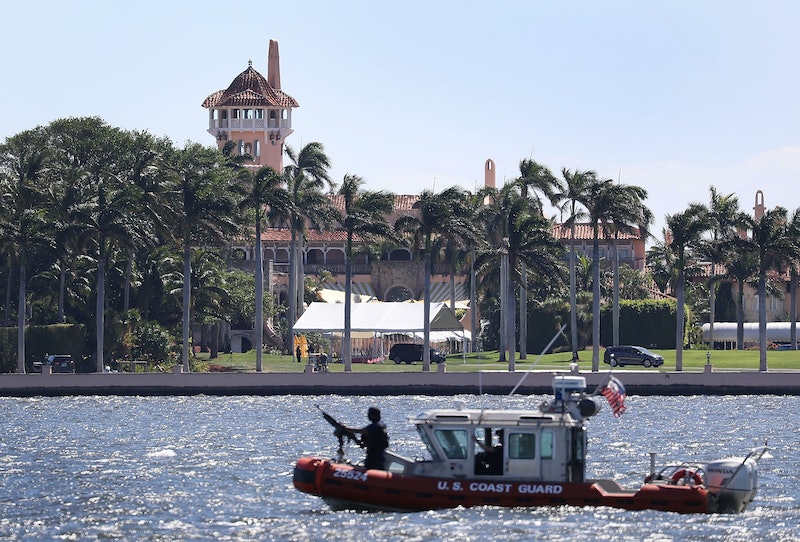 For a president who made his opponent's cybersecurity carelessness central to his campaign, Donald Trump has been seriously lax on cybersecurity himself. Specifically, the Trump resorts including Mar-A-Lago have dangerously easy Wi-Fi to break into, according to a new joint report by Gizmodo and ProPublica.

Yes, Trump led his supporters in chants of "Lock Her Up!" at every rally (and still likes to do so on occasion). And yes, Trump's victory may have come as a direct effect of then-FBI director James Comey's announcement that the agency was re-opening the investigation into Hillary Clinton's emails. But does that mean that he's learned from Clinton's mistakes — the very ones he exploited — and implemented a policy of increased security for all of the networks that could be used, in turn, to exploit him?

In short, no. Reporters for Gizmodo and ProPublica checked out the cybersecurity features at several of Trump's resorts and found them to be severely lacking. Each one of them Wi-Fi networks that were either open or easily breached, even by amateur hackers. They also found printers that could be used to monitor an entire network and online gateways that hackers could get through if they just waited long enough for someone else to sign in. Basically, as the chief of security strategy for the cybersecurity firm SentinelOne said, “I’d assume the data is already stolen and systems compromised.”

Now, apparently these sorts of leaky systems are pretty par for the course when it comes to cybersecurity at hotels and resorts, although Trump has had to settle over a cybersecurity breach at a hotel of his in the past — a fact which, perhaps, the Democrats could have used to greater effect during the election. But Trump is more than a hotelier and a real estate mogul now; he is the president — one who frequents his hotels and receives other country's leaders there. And past regrets notwithstanding, it puts our nation's security at risk if the president and his associates are going to be going anywhere near such dangerously open wireless networks.

One threat, for example, is that using an open or easily breached network, hackers could have taken control of any number of devices in Mar-A-Lago. The devices could then be used for surveillance, and monitoring the goings on at what Trump calls the "Winter White House" would already have yielded a lot of titillating information. And that's not even counting any potential physical security breaches — no doubt there is increased security when Trump's around one of his resorts, but the Gizmodo and ProPublica reporters were able to get quite close to the properties without being reprimanded or questioned. As a reminder, the Soviets were pretty good at secretly installing monitoring devices back in the 1980s — and it's highly unlikely that the Russians haven't built on that technology.

This isn't quite as flashy of a story as Trump sharing highly classified intelligence information with the Russian ambassador and foreign minister, but it's just as dangerous, possibly even more so. Add this to the list of ways that Trump is making the country less secure during his presidency. It might even come up in his potential impeachment proceedings.

More like this
How To Protect Your Digital Privacy If You Need An Abortion Post Roe v. Wade
By Kaitlyn Wylde
When Did Tamagotchi Come Out? In The U.S., 25 Years Ago
By Kaitlyn Wylde
Michigan’s Governor Is “Going To Fight Like Hell” To Protect Abortion Access
By Andrea Zelinski
How To Fight For Reproductive Rights, Based On How Much Time You Have
By Courtney Young
Get Even More From Bustle — Sign Up For The Newsletter