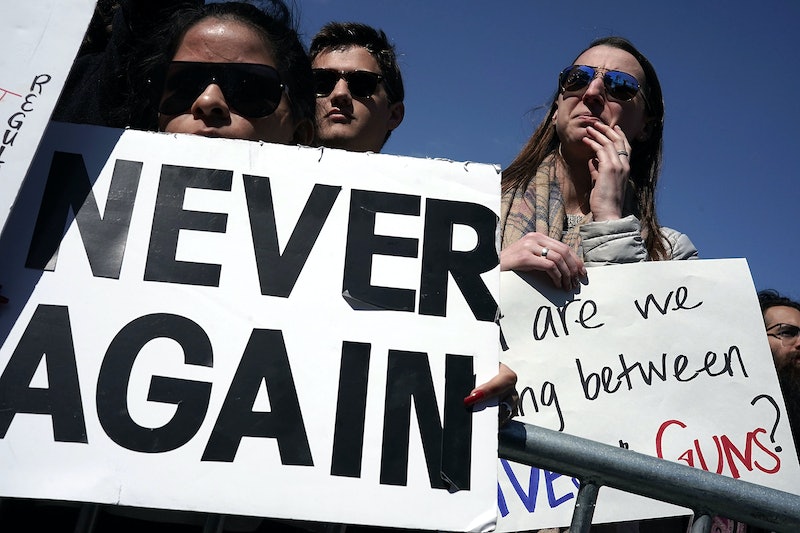 The March For Our Lives was one of the largest protests in the country's history. And since then, its youth organizers in charge have looked for ways to build on that success, particularly legislatively. With the 2018 elections just months away, March For Our Lives organizers' plan for the midterms is an ambitious one: to turn young people into voters.

In the past few months, the fight for gun control has galvanized young people to take to the streets and push against America's lax gun laws. There's a reason for this shift in energy. Jaclyn Corin, a Parkland shooting survivor and one of the activists at March For Our Lives, tells Bustle that young people are ready to be more politically active. This, she says, is all the more relevant when it comes to gun violence because "no one can avoid it."

"Unfortunately, gun violence affects almost everyone in this country — whether it be personally or a family member or friend," Corin says. "If you're lucky enough to not know someone [who has been through it], there are no promises that you will not eventually know someone that has been affected by gun violence."

To turn that momentum into tangible results, Corin says that March For Our Lives will follow a strategy to encourage youth voter turnout in the midterm elections. The group's strategy will see them collaborating with other voter participation groups and canvassing for local candidates in over 70 districts. It also includes informing impoverished communities about how to register to vote and where their nearest polling station is.

And in the weeks before the midterms, March For Our Lives will turn to voting drives to drum up interest for the midterm races — especially among younger people.

Getting the vote out has been one of the group's main strategies in its push for gun control. David Hogg, one of group's most prominent activists, spoke about the importance of voting at his March For Our Lives speech in Washington in March.

"This is the start of the spring and the blossoming of our democracy, so let's take this to our local legislators and let's take this to midterm elections because without the persistent heat, without the persistence of voters and Americans everywhere getting out to elections, democracy will not flourish, but it can and it will," Hogg told the crowd.

It helps, too, that Hogg and his Parkland peers have built a reputation for their use of social media. Their ability to command massive engagement online could be translated into active interest in voting on the ground as well. March For Our Lives activist Matt Dietsch, another prominent Parkland survivor, tells Bustle that social media is "just another tool to help communicate the reality of what America is going through right now."

The idea, according to Deitsch, is to remain honest and authentic about their experiences with gun violence as survivors of the Parkland shooting.

The March For Our Lives activists are also aware that their undertaking — to get young people to vote in the midterm elections — may not be an easy one. According to The Washington Post's analysis, youth voter turnout remains low in midterm elections.

"For the most part, the people who aren't engaged tend to lack the information on what is actually important," Deitsch says. But having activists like Corin and Deitsch explain the process of getting registered can help — and according to Deitsch, so does driving home the fact that this issue is quite literally "a matter of life and death."

And these Parkland students have put in the work all summer. They wrapped up a 59-day summer bus campaign on Sunday in Newton, Connecticut, the site of another gruesome school shooting at Sandy Hook Elementary School. In Newton, as in many other towns across the country, they met with local activists on their tour, registering young people to vote and engaging with other teens to empower them to go out and do the same.

Part of the push to get young people to vote lies in messaging, as well. Corin has expressed her idea to make the political process more interesting, telling MSNBC's Joy Reid in June that she wanted to make voting cool. And it just might be, thanks to activists like herself. "It's quite easy to make voting cool when young people are doing the work," Corin says. "It's something that people aren't embarrassed to get involved in anymore. It's actually what we needed at this time."

Both Corin and Deitsch are optimistic about the near future — particularly about getting young people to care about voting. "This new generation of voters will create a better America because they're hungry for one," Deitsch says. "People all the way down to the age of 7 have been communicating that this is not acceptable. This world they are living in is not acceptable. These are young people hungry for a better America and I think they will show up this November."