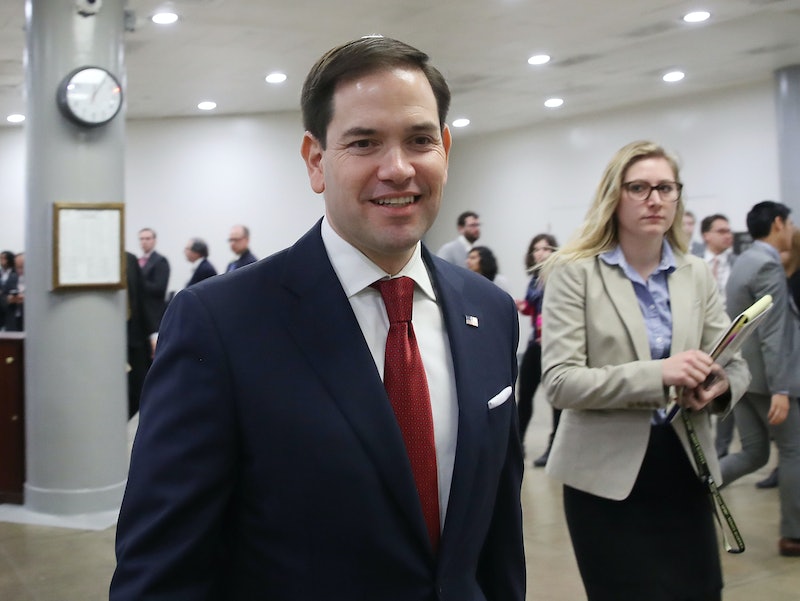 As Republican lawmakers across the country face angry voters at town halls, Florida Sen. Marco Rubio has figured out a way to avoid a messy confrontation with his constituents: Don't go to town hall meetings. After missing one such forum in his state earlier in the week, the Miami New Times reported that the Florida Senator will skip out on another town hall on Thursday evening. A labor organizer tracked Rubio down at Jackson Memorial Hospital and asked him if he planned to host any town halls. In response, Rubio fled the protester and didn't answer the question. The whole exchange was captured on video.

"Are you going to host a town hall?" the protester — a local labor organizer who asked that the Times not identify him — asked the senator. Rubio didn't respond, and kept right on walking, so the protester repeated himself.

"Good to see you, man," Rubio said, flashing a thumbs up and continuing on his way. The labor organizer repeated the question a few more times, and reminded Rubio that "there's a constituent town hall today." Rubio kept ignoring him, the protester kept asking the question, and thus the cycle repeated until Rubio was out of sight.

February hasn't been a very good month for Republican members of Congress. Ever since President Trump and party leadership made it clear that they do indeed intend to repeal the Affordable Care Act, scores of GOP lawmakers have been confronted by furious constituents at town hall meetings. Some Republicans, such as Rep. Jason Chaffetz, have also been confronted about their unwavering, seemingly non-negotiable support for President Trump. Many of these encounters have been caught on camera.

This is, of course, democracy in action: Constituents elect someone to represent them in Congress, and if they become unhappy with what their representative is doing, they let him or her know about it. However, a good number of GOP lawmakers have responded to these voters not by reconsidering their positions, but by denying that the protesters at their town halls were constituents to begin with, and insisting without evidence that they're actually paid agitators. When "representatives" dismiss any constituent who disagrees with them, that raises the question of who, exactly, they're representing.

Protesters later tracked Rubio down at Florida International University, where he'd been teaching a class — and to his credit, he did stick around for 12 or so minutes, engaging the protesters in a substantive back-and-forth about health care policy. Although Rubio doesn't deserve any awards for this — it's the bare minimum he could do as a U.S. Senator — at least he didn't run away from his constituents and avoid the question. That's sort of a good thing, right?