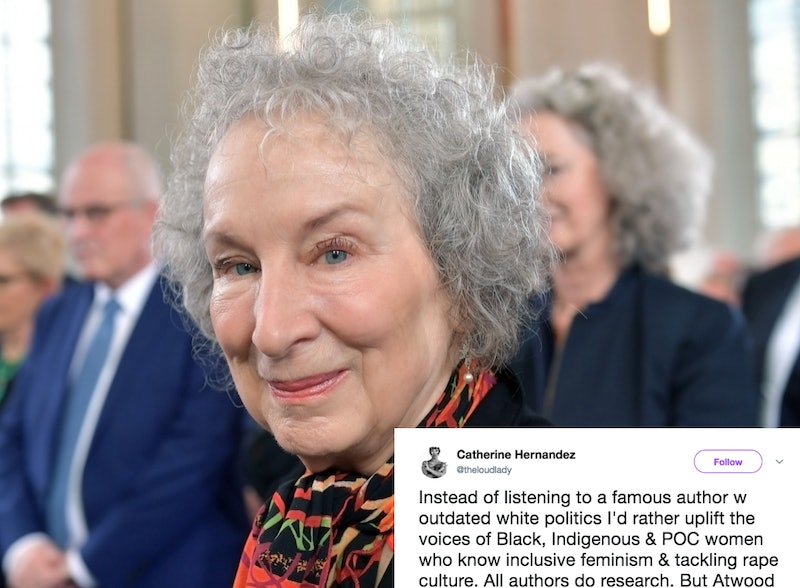 Over the course of her illustrious career, Margaret Atwood has been heralded as a champion of women, but as often as she is praised for her groundbreaking writing and activism, the author is also criticized for her failure to fully support the feminist movement. Most recently, the author of The Handmaid's Tale criticized the #MeToo movement in an article published by Canada's Globe and Mail on Jan. 13, and some fans are outraged by her controversial comments.

Despite being celebrated by many as a pioneering writer of feminist fiction, Margaret Atwood has a long and complicated history with the "F" word. For decades, the author has avoided labeling her work, including The Handmaid's Tale, as feminist, despite overarching themes of power, oppression, and gender inequality. Last year, while doing press for Hulu's adaptation of her novel, Atwood came under fire for her public disputes over the definition of feminism, the movement's purpose, and whether or not she considered herself part of it. Over the weekend, Atwood stirred up the controversy again when she published a provocative article titled "Am I a bad feminist?" For many who read the piece, the answer was a resounding "yes," but not everyone disagreed with the author's controversial take.

The editorial, which appeared in The Globe and Mail on Jan. 13 and was updated on Jan. 15, made several critical points about the #MeToo movement and the current referendum on North America's prevalent rape culture. Atwood described #MeToo as a "symptom of a broken legal system" whose inefficiencies force the public to play judge, jury, and executioner. Using the context of the University of British Columbia's very public firing of author Steven Galloway, who was accused and then later cleared of sexual assault charges in 2016, Atwood went on to discuss the purported danger of persecuting those accused of sexual misconduct based on women's allegations alone.

"All too frequently, women and other sexual-abuse complainants couldn't get a fair hearing through institutions – including corporate structures – so they used a new tool: the internet," Atwood wrote. "Stars fell from the skies. This has been very effective and has been seen as a massive wake-up call. But what next? The legal system can be fixed, or our society could dispose of it. Institutions, corporations and workplaces can houseclean, or they can expect more stars to fall, and also a lot of asteroids."

Shortly after its publication, the internet entered a Twitter battle royale over the definition of feminism, the purpose of the #MeToo movement, the importance of hearing the voices of sexual assault victims. Many on social media were quick to criticize Atwood for being out for missing the point of the current revolution, for being of touch with the modern feminist movement, and for ignoring victims of sexual assault and supporting powerful accused men instead.

Others, however, agreed with Atwood's take on the controversial issue. Many were quick to support the author's belief individuals should be innocent until proven guilty, while others pointed out the hypocrisy of feminists openly attacking the female author.

Following the barrage of criticism from all sides, Atwood tweeted to let fans and haters know she would be taking a break from social media. "Taking a break from being Supreme Being Goddess, omniscient, omnipotent, and responsible for all ills," her tweet on Sunday read. "Sorry I have failed the world so far on gender equality. Maybe stop trying? Will be back later. (Next incarnation maybe.)" The next day, however, Atwood was back online to defend her opinion piece and her criticism of the #MeToo movement, as well as clarify her belief in gender equality.

If you agree with Atwood's take on #MeToo or not, it is impossible to deny that the author's controversial article has sparked an important discussion about feminism, justice, and the need for real change in our culture. Whether it is in her writing, through the adaptation of her works, or on her Twitter account, Atwood continues to push the conversation about equality and fairness forward, and chances are, "Am I a bad feminist?" isn't the last we will here from her.