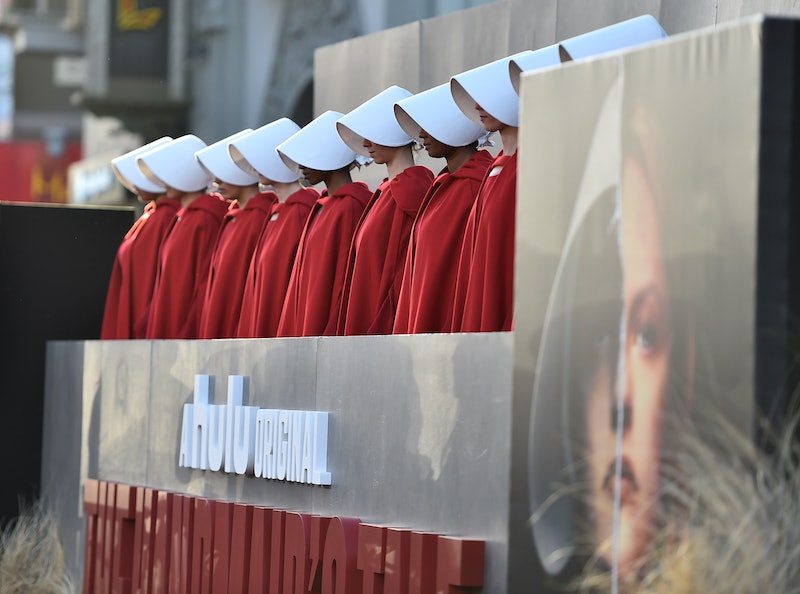 America under the Trump Administration has been compared to many things, most notably the dystopian fiction novel The Handmaid's Tale. During the PEN Literary Gala on Tuesday, May 22 to honor free speech, the novel's author, Margaret Atwood said Trump's accusations of "fake news" are dangerous. And her warning is nothing short of chilling.

"When democracy is in retreat, the first thing authoritarians do is silence those who are telling stories they dislike," Atwood said during the event. "While the United States isn't putting reporters in prison yet, the tactics of the current administration are dangerous."

Atwood went on to list examples of tactics the Trump administration has employed like "attacking reporters by name, allegedly threatening to retaliate against coverage that's perceived as unfavorable, and branding certain news organizations as "the enemies of the American people," according to The Hill.

"'Fake News' is now an international knee-jerk response by strongmen and dictators seeking to discredit accurate reporting," Atwood continued in her gala speech. Her comments hold some truth because the Trump administration continues to utilize these tactics, causing a rift in its relationship with the media.

On May 22, at the Deadline Club Awards Dinner in New York City, for example, Lesley Stahl, a correspondent for 60 Minutes, confessed that Trump once admitted that his attacks on the media were purposeful. Stahl revealed that when she and one of her colleagues met with Trump while he was still the president-elect, he began raving against the press and she asked him what purpose his attacks served.

According to Stahl, who paraphrased Trump's original statement, he said, "You know why I do it it? I do it it to discredit you all and demean you all, so when you write negative stories about me no one will believe you." Bustle has reached out the White House on these claims.

Wednesday wasn't the author's first time criticizing the administration. Earlier in May during an interview on ABC News' Nightline, she said that the country now has "Gilead-like symptoms going on." This statement is in reference to her book, where Gilead represents the majority of the nation under a Christian theocracy that is built on "enforcing gender-based subservience," The Hill reports. In a Reuters interview last year, Atwood even compared Trump to the dictator who runs the nation in her novel.

"You are seeing a bubbling up of it now," she said in the interview, referring to Trump's policies. "It's back to 17th century puritan values of new England at that time in which women were pretty low on the hierarchy."

Later in the interview Atwood said The Handmaid's Tale saw a rise in sales after the 2016 election, an action she says came from people worrying about women's rights under Trump's administration and drawing parallel to the lack of women's rights in the book. Or maybe it was because Hulu announced they would be adapting the novel into a series towards the end of the election.

The book and series alike inspired multiple protests. One of the most notable was when when a group of 30 women dressed like the women in Atwood's novel — with red cloaks and white bonnets — and walked around the U.S. Capitol to protest a proposed GOP health care bill. If passed, the bill would dismantle the Affordable Care Act and defund Planned Parenthood for a year, according to CNN politics. The Senate failed to pass it in July.

"We deduced to dress in the 'Handmaids'-inspired costumes because the novel/television series presents a dystopia where women's bodies are not their own," one of the protesters, Elena Lipsiea, said to CNN Politics. "This is narrative is all too real. We want our senators and administrators to know just how serious we take their legislation and our right to health care. The costumes make a visual statement and demonstrate how seriously we take this."

Considering the parallels activists have drawn between Atwood's novel and modern day America, one particular point in that Nightline interview especially stands out. Atwood referenced the late author Mary McCarthy and her 1986 New York Times Book Review of The Handmaid's Tale. In the review, Atwood said McCarthy disagreed with the insinuation that Atwood was making that the country was moving toward an ultra-conservative theocracy.

"I would rather be where Mary McCarthy though we would be," Atwood said during the interview. "I would rather she had been right." And after Atwood's most recent warning, it rings especially true for the author.