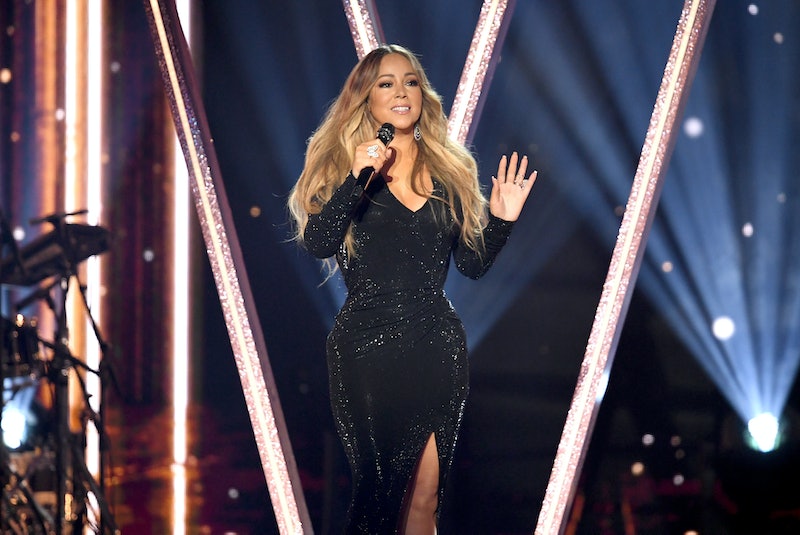 All hail the queen. Mariah Carey stepped onto the 2019 Billboard Music Awards stage on Wednesday night, and her full ensemble was as extra and fabulous as the diva herself. While the singer is undoubtedly always dressed to impress, her outfit for the BBMAs was particularly over-the-top because the music legend was honored with the Billboard Music Awards ICON award.

Mariah Carey is one of the biggest hitmakers in the music industry. Since she came onto the scene in the 1990s, she has managed to lead the Billboard Hot 100 in every year of the decade. In fact, according to Billboard, she is the only artist to top the chart in every year of any decade. Carey also holds the title of the most number one songs on the chart as a soloist (she's got 18 total) and has the highest number of weeks spent on the Hot 100. Billboard also noted that six of her albums have landed at the number one spot of the Billboard 200 albums chart. To say that this ICON award is well deserved is a complete understatement. It's about time Miss Mariah Carey has her moment to shine!

During Carey's performance, she wore a sparkly long-sleeved black dress that cinched at the waist and featured a thigh-high slit. The songstress paired the show-stopping look with sky-high Sophia Webster heels and shiny diamond jewels aplenty. On her hand, Carey wore a butterfly ring (an ode to her sixth studio album) and on her ears, a pair of gorgeous diamond drop earrings. Carey wore her signature hair look — down in voluminous, flowing waves — and kept her makeup simple and glowy.

Carey sang a medley of her hit songs, featuring "Always Be My Baby," "Emotions," "Hero," and "We Belong Together." The idol was not alone on the stage — she had a crew of back-up dancers behind her as she wowed the crowd with her striking and memorable voice. Audience members couldn't help but sing along with Carey, including Taylor Swift, who cheered loudly for the musical legend from her seat and her biggest fans, her son and daughter.

At the end of her performance, Jennifer Hudson presented Carey her award. Just like members of the crowd, Carey was crying as she accepted — but she wiped tears away from her face with a tissue (and then quickly tossed it away on stage, like a true diva) before making a heartfelt speech about receiving the ICON award.

"I still feel like that lost interracial child who had a lot of nerve to believe I could succeed at anything at all in this world. But I did believe, because I had to," Carey said into the microphone.

Mariah Carey will be returning to The Colosseum at Caesars Palace later this year for another run of All I Want For Christmas Is You, her hit holiday show. For details on dates and how to score tickets, you can check out her tour page online.