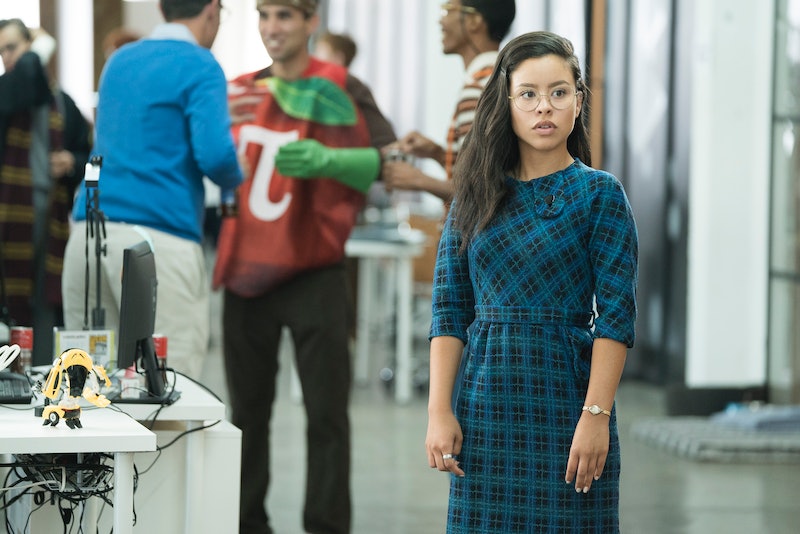 If college is supposed to prepare you for the real world, Mariana Adams Foster needs her money back. A brilliant engineer during her days at MIT, she’s still brilliant — she’s just not getting any of the respect that she deserves at her job at Speckulate. But it’s not just that Mariana isn’t being fostered (pun intended) and mentored in her first new job. She’s also a victim of the insidious sexism that men don’t see. It’s gentler, maybe, than catcalls and unwanted physical touching — more patronizing than downright aggressive. But these micro-aggressions have made work unbearable, and Mariana’s new women’s group on Good Trouble may be designed to bring it all to the ground. Or at least help her get the recognition she should.

On Mariana’s first day at Speckulate, her supervisor, Alex, who is a whole host of horrible words wrangled into one mouth-breathing excuse for a human, just wants her to work on some code — that code turns out to be a bunch of files of breasts that they save on the server for this sole purpose. This is sexual harassment, but Mariana’s been told (by another female engineer, too) to laugh it off and go with the flow in order to make real changes at Speckulate. You have to have a seat at the table before you can start redecorating said table. And that's not all Mariana’s dealt with since starting her job at Speckulate — she's been pushed away from good projects, left out, and even told to stop dressing like herself all because she is a woman.

Everything that Mariana has gone through is grounds for dozens of sexual harassment complaints, but it’s Raj, the member on the team to which she is closest, who hurts her the most. She thinks she and Raj are friends, but after he asks her for help on a code project but then tries to kiss her, the bubble pops. Raj just wants to get into her pants, and when he tries to play the, “we cool?” card, she lets him have it. Mariana screams that Raj’s behavior, as “harmless” as it may seem, has actually made her feel more vulnerable and scared than she already does at Speckulate. After that, she gets a-typing to the women of Speckulate. This is Mariana’s Norma Rae moment — unionize and make a stand, or die trying.

The outright sexism that Mariana has experienced while at Speckulate is easier to point out, but what Raj did is actually more harmful. Raj would never think to try and kiss another coworker, but because he and Mariana are friends and she’s a woman, he thinks it’s OK. It’s too simple to chalk this all up to “mixed signals” and “no hard feelings,” because Mariana hasn't shown any romantic interest in him at all. The fact of the matter is that Raj took liberties with Mariana he wouldn’t take with a man.

He felt that he could kiss her, so without her permission, he tried. Raj thinks that he’s unlike Alex and the rest of the Speckulate idiots, but in reality, he’s just like them. Mariana is sick of it, and she’s now funneling her rage into something important — changing things, seat-at-the-table be damned.