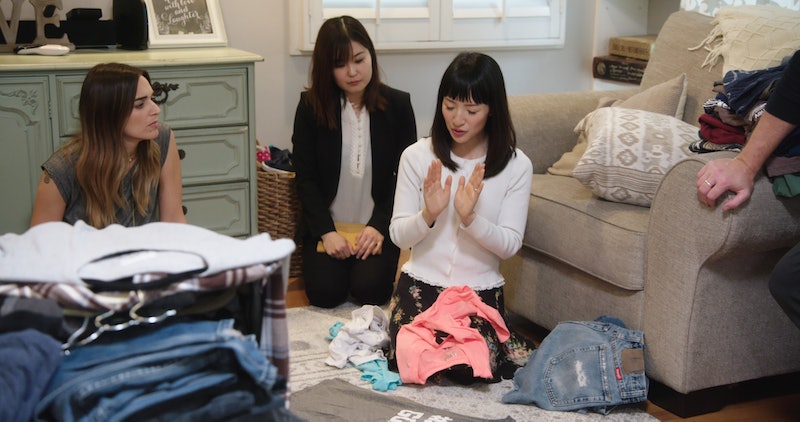 As the phrase goes, one person's trash is another person's treasure. And thanks to a new Netflix show, it seems a lot of treasure is showing up at thrift stores at the moment. As reported by BuzzFeed, Marie Kondo is responsible for an increase in thrift store donations made in light of her Netflix series Tidying Up with Marie Kondo. If these people are getting rid of things simply because they don't "spark joy" for them, then there might be a lot of good stuff out there.

If you're unfamiliar with Kondo, the Japanese "tidying consultant" created the KonMari method of organizing one's home and getting rid of items that do not "spark joy." In particular her #1 New York Times best-selling book The Life-Changing Magic of Tidying Up caused her to rise to fame in the U.S. (The book was published in 2011, but released in the U.S. in the fall of 2014.) On January 1 of this year, Netflix debuted Tidying Up with Marie Kondo, which documents Kondo going into people's homes and helping them with the KonMari process.

As with her book, the show really got people talking. Posts about Kondo are all over Twitter, and apparently, the effect is moving beyond the internet, too.

As reported by BuzzFeed, some organizations have seen an uptick in donations that seem to correspond to Kondo's show. For instance, Ravenswood Used Books in Chicago posted on Facebook, "Because Marie Kondo's TV show on cleaning has begun running on Netflix, we took in a month's worth of books in 2 days." Leah Giampietro, a manager of a Beacon's Closet consignment store location, told CNN that January is usually a slow time for people coming in to sell clothes, but that they've gotten a ton of items this month. Philly AIDS Thrift in Philadelphia had three people in one day come in with donations and specifically cite the show as the reason, according to The Philadelphia Inquirer.

That said, not everyone is ready to say this is Kondo's doing. Malini Wilkes, the public relations and multimedia manager for Goodwill told CNN for their report in early January, "Activity (at our stores) is often strong the first week of January anyway. People have New Year's resolutions, people have time to get their boxes together, that kind of thing."

Still, the reports from people working in the stores and the messages about donations on social media make it impossible to deny Kondo is having an effect, even if the extent of it is hard to pin down. A woman named Katie Miller, who got rid of six trash bags worth of non-joy-sparking stuff, told Today, "We started watching the show last week … and I thought, 'Well, we’re really going to start donating things now.'"

The same thing happened back when Kondo's book became massively popular in the U.S. a few years ago. Similar to the reports about the effect of the show, Beacon's Closet told Fashionista in April 2015 that people selling their clothes were mentioning the KonMari method. Also, at that time, Goodwill noted an increase in donations to Fashionista, but couldn't say for sure if it was linked to Kondo.

There's no way of knowing exactly which donations have to do with Kondo, but if there is more stuff popping up in thrift stores, the chances of finding good stuff are better. So get out there and find some things that spark joy for you.

More like this
15 Genius Storage Solutions For Your Next Bathroom Refresh
By Emma Garza
What Is The Forest Personality Test? The TikTok Trend, Explained
By Georgina Lawton
The 6 Best Vacuum Seal Containers
By Cristina Sanza
These Clever Things On Amazon Make Your Clothes Look Nicer On You
By Nicole Zane
Get Even More From Bustle — Sign Up For The Newsletter