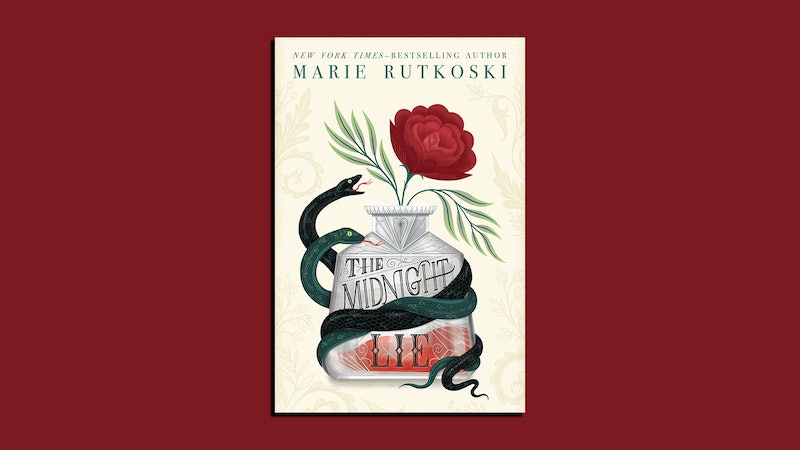 When Marie Rutkoski's Winner's Trilogy came to a close in 2016 with The Winner's Kiss, fans were already clamoring for more from the YA fantasy author. Now, on March 3, 2020, Rutkoski will return to the universe of her beloved trilogy in The Midnight Lie. Bustle has the exclusive cover reveal and an interview with Rutkoski below.

Set two decades after the events of The Winner's Kiss, the new book follows Nirrim, a Half Kith woman (according to Rutkoski, the term "kith" is synonymous in this book with "class" or "kind") who lives in the Ward, a grim and punishing city kept behind a wall. A harsh tribunal rules and insures that society's pleasures — everything from brightly colored clothing to certain fruits — are reserved for the High Kith. People of Nirrim's low status keep their heads down, or risk their lives. But when Nirrim encounters Sid, a rakish traveler who tells her that the High Kith might possess magic, Nirrim decides to seek that magic for herself. But to do so, she'll have to place her trust in Sid, who asks, above all, not to be trusted. Along the way, Nirrim finds herself questioning everything — including her growing romantic feelings for another woman, a relationship that is illegal for her Kith.

"This woman is not somebody who sticks around," Rutkoski tells Bustle. "She is in fact somebody who looks a lot like 'The Rake' archetype from a romance novel. 'The Rake' is somebody who seduces women, who is out for his own pleasure, who is charming but also, irresponsible. And I thought that it would be really interesting to write that kind of character, [as] a woman, the love interest of my main character."

For Rutkoski, the book's cover speaks specifically to its explorations of truths and lies, love and betrayal, and the equivocations that her characters make to protect others — and themselves. Check out the stunning cover below, which was designed by Elizabeth H. Clark and illustrated by Lisa Perrin:

"I think this is my favorite cover out of all the books I’ve ever written," Rutkoski tells Bustle. "It’s beautiful, and I also think that artistically, it is very clever. Because you have a lot of visual echoing within the design. You have the two snakes that echo each other. You have the rose, the center of which echoes the heart that’s engraved into the vase. You have the two sets of leaves that come from the rose, the two tails at the bottom. All this doubling is very connected with the title itself, The Midnight Lie, which refers to a term in the book. A 'Midnight Lie' is a lie that you tell for somebody else’s good, or it’s a lie where you technically tell the truth and, by doing so, deceive others. I also love that the cover lets us know that this is a romance, that this is about two people who find each other and fall in love."

In the Q&A below, Rutkoski talks to Bustle about her writing process, returning to the universe of The Winner's Trilogy, and why The Midnight Lie is her most personal book yet:

How different is the world of this book from the world of The Winner’s Curse, despite the fact that they exist in the same universe? It does sound like it is a very different place that they are living in now.

Marie Rutkoski: Yes. The Winner’s Curse books are set in an invented world [but] there is no observable magic. In those books, Arin thinks that he has been blessed by the god of death and that the god of death speaks to him. Kestrel is an atheist and doesn’t believe in the gods. And she also knows how damaged Arin is, as someone who lost his family at such an early age, who endured slavery. And so, her suggestion at one point in the book is, “Are you sure that you’re hearing the god of death? Or are you maybe just hearing a voice in your head?" Even though there’s the potential for some people to believe in something like magic in those books, there’s also always a plausible deniability. In this book, the possibility of real magic seems to exist.

The book is set on an island that is forgotten by the rest of the world, if they ever knew of it. Its culture seems to be close to the Herrani culture, as is established in The Winner’s Trilogy. Its people look very similar, they once believed in a set of gods like the Herrani do... So its almost as if Herran came from this island and then forgot about their own origins. [Also] the people on the island itself don’t remember their own past. There’s this phrase that they say over and over again: 'It is as it is.' If somebody asks Nirrim, 'Well, why do you live behind a wall?' she’ll say, 'It is as is it. It is the way it has always been.' Whereas in The Winner’s Trilogy, people understand why their world is the way that it is.

For an author like you whose book is so highly anticipated, what was your writing experience like this time around? Did you feel any pressures, or have any new expectations for yourself?

Rutkoski: I do care deeply about bringing pleasure to my readers. I want to write something that will enrapture them and take them to another world. But it’s also, I think, important to write about issues that matter. With this book as with my other books, while it does include what I hope is a compelling romance, it also explores things that are really crucial to understanding our place in society such as: How do power dynamics work? What do we do with inherited and problematic systems that oppress some people and elevate others? The things that have always been important to me in writing definitely hold true in this book.

I was surprised to find myself writing in the first person for this book. It’s not a point of view I usually write in. This book is told in Nirrim’s voice and it was a good choice, because it was important to see not just how Nirrim sees her world, but also how she doesn’t understand fully the situation that she is in. She is, in some ways, an unreliable narrator. Not because she intends to be unreliable, but because she doesn’t even see the way that others treat her as being as problematic as it really is.

As an author, do you feel a different sort of connection with the characters when you write in first person?

Rutkoski: I think so. I mean, I do feel maybe more connected to Nirrim than I have to other characters. I loved Kestrel and I felt connected to her in the sense that she’s really analytic of her world and her surroundings, and I too, am constantly trying to figure out why people do the things they do and say the things they say. But I really connected with Nirrim, and see myself in her, because she tries so hard to be good and to do good, and is also somebody who, although she tries to do what people expect of her, does stuff out of line. [She] doesn’t follow the script that society has written for her. And I found myself doing that too, in my personal life.

Why did you make that shift this time to centering queer characters? Why was that important to you?

Rutkoski: There are so many reasons. When I went on tour for The Winner’s Kiss, I did a book event in St. Paul at The Red Balloon bookshop. And there was a reader who came up to me, and she said, 'I love these books, and I love that we have a gay character in Roshar, but where are the women? Where are the fantasy books that really show queer women characters?' And there are! There are those books, and I’m so grateful for them. But I wanted to add to that. I wanted to write a book that would be for that reader. I wanted to add to that corpus of very important queer fantasy books written for teens.

I also think personally, it was important for me to write this book. I do think that we all inherit a really powerful script, a guideline for how to live your life. If you’re a woman you’re expected to grow up, marry a man, and have children. And I did follow that script. I was in a straight marriage for a long time, and I still care very much about the person to whom I was married, and respect him. But it’s also been really liberating for me to now be in a queer relationship, and to realize that there are actually many different scripts, there are many different stories, many different narratives that young readers could see in my book and in other books and see a potential way to live.

Did you find writing this book helpful or cathartic in any way toward understanding your own feelings?

Rutkoski: I can say that my personal experience helped me write both Nirrim’s fear and also her wishes, her hopes and also her desires. Nirrim is a very dear character to me, partly because she’s so vulnerable. There’s the risk of believing that she’s not brave, or that she’s too tentative. But she’s somebody who risks a lot. She is somebody who decides that she is going to seek what she wants, even though she knows that she will probably lose in the end. She does fall in love with another woman, and even as she’s falling in love, she knows that it’s incredibly likely that it’s a love that isn’t going to last. And she chooses it anyway. I don’t know that I am as brave as Nirrim, but I hope that I would be.

You can now pre-order The Midnight Lie by Marie Rutkoski, available on March 3, 2020.