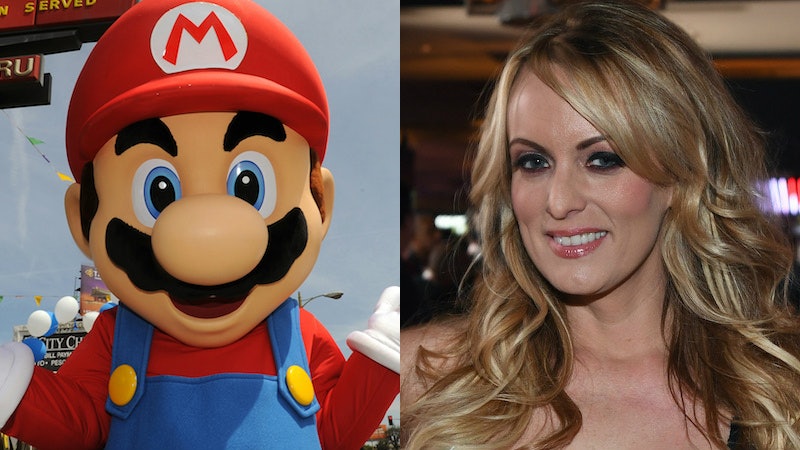 Stormy Daniels has changed American history by agreeing to a non-disclosure agreement with President Donald Trump — and then suing him to get out it. Now, in a preview of her tell-all book Full Disclosure, there's a very specific detail that might change how you think of, well, something else. Mario Kart memes are everywhere thanks to Daniels and her comments on Trump.

The excerpts from the book were published by The Guardian and compare the president's penis to one of the video game characters — specifically, Toad, who she describes as "the mushroom character in Mario Kart." The newspaper also quotes another section, in which she describes being "annoyed" while she was allegedly having sex with Trump. President Trump has denied that the affair ever took place.

The memes are flying around the Internet with "Mario Kart" trending on Tuesday morning. Many are users warning others to steer clear, not click, and preserve their innocence about Toad. "Whatever you do, DO NOT click on the 'Mario Kart' tag," writer and lawyer Amee Vanderpool wrote.

But most seem to have done just that and added to what's out there, while a few innocent video game fans are still enjoying the trending topic in blissful ignorance.

The character Toad's background was brought up by Adam Moussa, who wrote, "The inaccurate claim that Toad is 'from Mario Kart' will be repeated a lot today." The character actually debuted in Super Mario Bros., in 1985. The Mario Kart games only debuted, with Super Mario Kart, in 1992. Toad's backstory is that he's from the Mushroom Kingdom, where he is an attendant to the Princess.

One detail about Toad that might be pertinent to the day's graphic discussion is that his mushroom-shaped head is in fact his head — not a hat as suggested in a tweet by BuzzFeed's Ryan Broderick. Nintendo is on the record, confirming it's not a hat, in a video uploaded to YouTube by the company in February 2018.

Nintendo of America even briefly seemed to be in on the jokes when a tweet of theirs started to be shared, but that was just an old post from 2015 that was being retweeted given the circumstances.

There were also a number of memes with photoshopped Trump yelling at someone mowing the White House lawn — first a kid and then Toad. In the picture with the kid, Mollie Goodfellow wrote, "HEY KID HAVE YOU PLAYED MARIO KART" as the caption.

There were a few other all-text jokes floating around. "Waiting for Trump to have a letter from 65 women saying his penis doesn’t look like the mushroom from Mario Kart," wrote Tony Posnanski, a comedian.

The vast majority of the tweets and memes were, though, about the reaction to the news of what the trending topic was truly about — or even the fear that this could become a broader news event.

"Americans need to prepare themselves physically and emotionally for the very real possibility that Sarah Sanders will stand behind a podium and deny that the president of the United States has a penis that looks like Toad from Mario Kart," wrote Chicago Tribune humor columnist Rex Huppke. "There will likely be charts."

One chart that was posted to Twitter already by user @pourmecoffee covered performance of "Toad Mario Kart" in Google Trends. Needless to say, the phrase was off the charts on Tuesday.

More like this
The 10 Memes That Defined 2022
By Alexis Morillo
Matt Hancock's “Cringe” Jungle Karaoke Left Twitter Reeling
By Sam Ramsden
What Does “The Rizz” Mean On TikTok? The Viral Slang Term, Explained
By Alexis Morillo
This AI Filter Shows How You’d Look In Different Time Periods
By Alexis Morillo
Get Even More From Bustle — Sign Up For The Newsletter