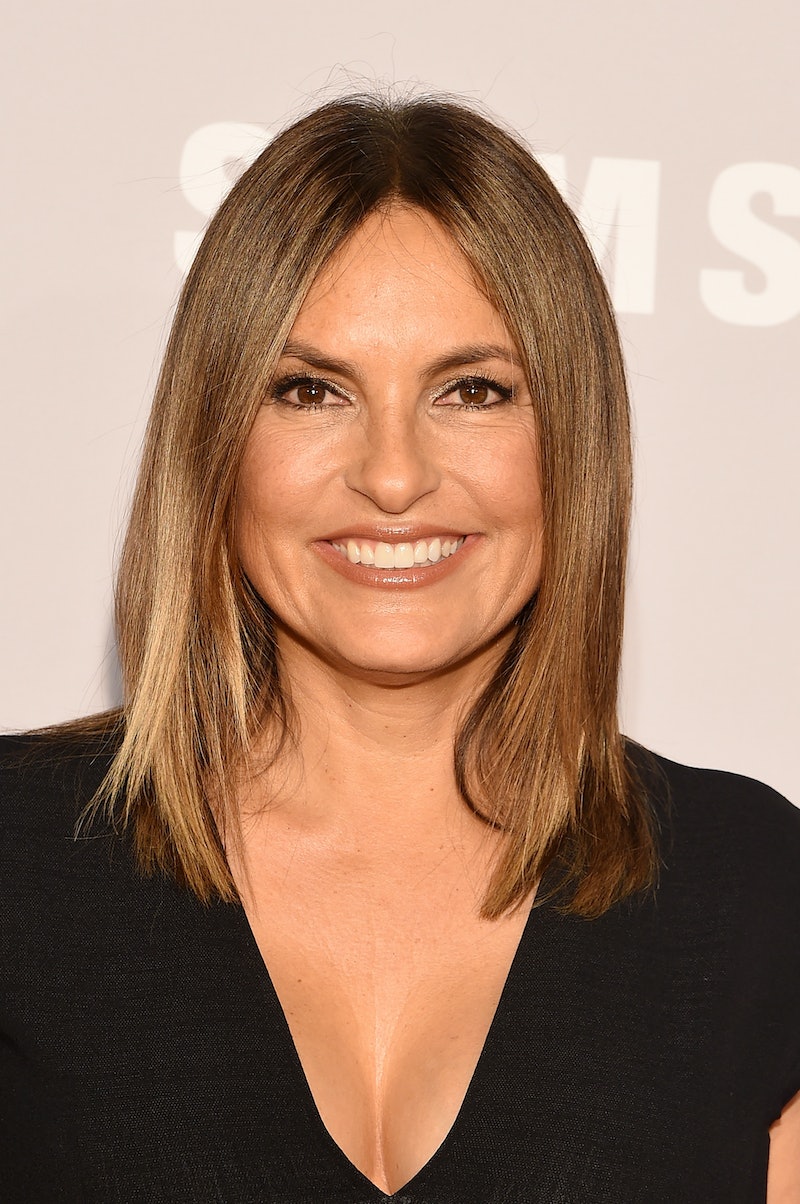 Stabler and Benson might be solving crime together again soon — if SVU fans get their way, that is. On Sunday, Sept. 15, Mariska Hargitay and Christopher Meloni reunited, and their weekend hangout left fans hopeful about their onscreen future. Next week, Season 21 of Law & Order: SVU will air on NBC, making the show the longest-running scripted prime-time drama, as per E! News. Hargitay, who plays Detective Olivia Benson, and Meloni, who used to be Detective Elliot Stabler, are stirring up all kinds of feelings online by getting together just ahead of the historic season premiere.

On Instagram, Hargitay posted selfies with Meloni from their hangout, captioning the photo: "Sunday night dinner...." It's nowhere near the first time the former costars and longtime friends have reunited, but the pictures made fans nostalgic for their early seasons of SVU regardless. In 2011, Meloni left SVU after a contracts dispute, despite being part of the show since its 1999 debut, according to TVLine. Over the years, Meloni has denied interest in returning to SVU, but his friendship with Hargitay, combined with the show's record-breaking new season, has fans hopeful the actor might reconsider.

Those very loyal SVU fans commented on Hargitay's Instagram, urging Meloni to return. One wrote, "i miss my man Elliot Stabler" with a sad face emoji, while another agreed, "We all miss this team!! #BensonAndStablerForever." Another person said, "STOP TEASING US GODDAMN IT," and others were hopeful for a guest spot in the new episodes, writing, "We need to see Elliot in an episode this upcoming season."

On Twitter, fans reacted by pushing for an onscreen reunion as well. One viewer wrote about missing the Benson-Stabler seasons, tweeting, "Ugh the show hasn’t been the same since stabler left. Even though I love me some svu!" Another fan tweeted about Meloni specifically: "I wish he would come back to the show."

Despite his onscreen departure, Meloni has clearly remained close friends with Hargitay over the years. For instance, in December 2018, Hargitay posted a photo with Meloni from vacation with the caption, "Vacay...A great night with this one. #Reunited #OldFriends #PTL."

Back in May 2018, Hargitay posted another photo with her former costar, writing, "Wanna see why I'm so #Happy swipensee #P4L." Meanwhile, Meloni shared a selfie with Hargitay from that same meet-up captioned, "Crazy ppl on the streets of nyc."

Even though the two spend plenty of time together in real life, it's not confirmed whether Meloni will make a final appearance on the show. In August 2018, Meloni said he didn't regret leaving SVU, "Not for a day," during an appearance on Watch What Happens Live! with Andy Cohen. Yet, in June of 2018, Hargitay supported a final Benson-Stabler moment in an interview with TV Insider. She said:

"I don’t know anything, but I think SVU is going to go on for a while. He’s on a show right now and he’s super 'happy', literally — he’s happy, I’m happy. I’ll speak for myself: I think it would be fun to have one last hurrah."

Current showrunner Warren Leight was also hopeful the iconic SVU detective duo would have a final reunion onscreen, according to E! News. "It's interesting to me. As long as the show is running, I feel like we will. Someday, I would hope to see him again," Leight said. "I don't know how, I don't know when, but, yeah, that's kind of, I think the fans and Benson and Stabler are owed that."

Fans may have to wait for Benson and Stabler to team up again on Law & Order. But lucky for viewers, real-life pals Hargitay and Meloni hang out often, which can fill that void in the meantime.

More like this
The 'Kenan & Kel' Reunion On 'SNL' Took A Dramatic Turn, Thanks To Keke Palmer
By Brad Witter
The First Trailer For 'That '90s Show' Includes So Many Nods To The Original Series
By Jack Irvin, Alyssa Lapid and Grace Wehniainen
Lindsay Lohan Just Recalled A Hilarious 'Parent Trap' Story
By Sam Ramsden
Theo James Revealed The Truth About His 'White Lotus' Nude Scene & Fans Can't Cope
By Stephanie Topacio Long
Get Even More From Bustle — Sign Up For The Newsletter