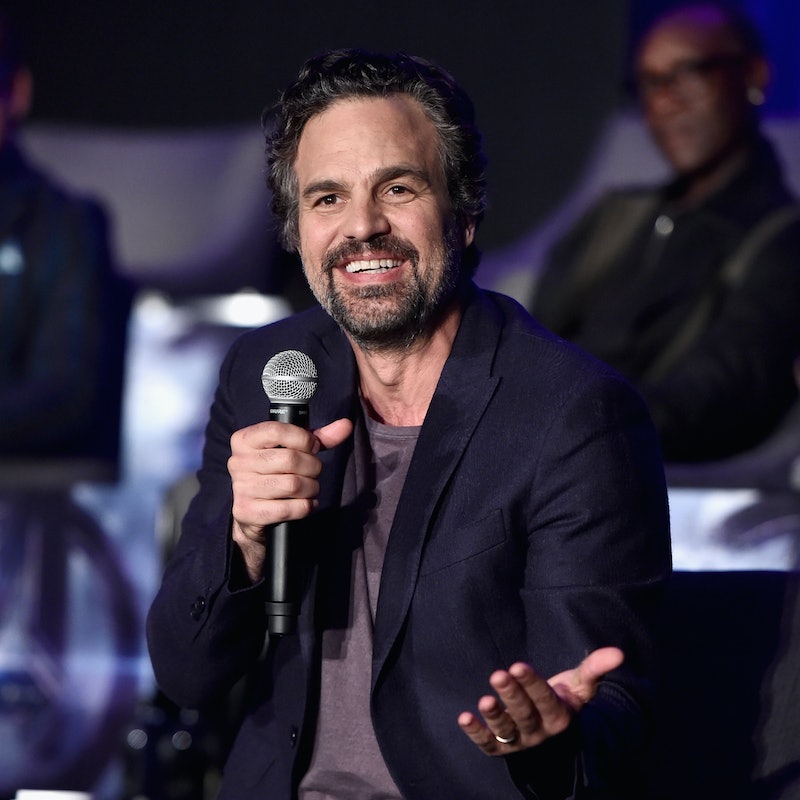 One of the only certainties in the ever-shifting Marvel Cinematic Universe is that anyone affiliated with one of its blockbusters should be able to keep a secret. Or several of them. This has proven to be a more difficult task for some Avengers cast mates than others. It was even revealed this week that Mark Ruffalo shot five different Avengers: Endgame endings. And if co-star Chris Evans has anything to say about it there could be a connection to Ruffalo's spoiler-filled past.

In an interview with E! News this week, Ruffalo (Hulk/Bruce Banner) sat down with co-stars Evans (Captain America) and Karen Gillan (Nebula) to discuss the April 26 release of Avengers: Endgame, somehow without actually talking about anything that happens in the movie. Ruffalo even divulged that he wasn't quite sure what happens in the three-hour runtime of the movie. "I don't know what's gonna happen," Ruffalo said to E! News. "I shot, like, five different endings to this movie. I didn’t even get a whole script to this movie. And I don’t know why. The script I did get had dummy scenes in it."

One of those dummy scenes seemingly involved Captain America getting married. But Evans himself seemed to know why Ruffalo wouldn't be the most trustworthy keeper of Marvel secrets.

Evans joked during the interview, "Mark's a real liability. They have to throw Mark off the scent." When Ruffalo incredulously asked why, Evans responded, "Because you have zero cred. You have earned no trust in the Marvel universe. You, like, leak like a bodily function." (Oh, how this cast will be missed.)

But Evans actually has a point. Ruffalo has been one of a few Avengers cast members known to get a little loose lipped about the MCU films. His history with spoiling Marvel-related topics is so well-documented that it's basically a choose your own adventure of incidents. It could be when Ruffalo accidentally live-streamed the first 20 minutes of Thor: Ragnarok via Instagram during the premiere. Or the time he spoiled Avengers: Infinity War during a Good Morning America interview when he said, "Wait until you see this next one. Everybody dies. Well, half."

Perhaps the most notorious instance of Ruffalo being his spoiler-ific self came when he seemingly spilled the title of Avengers: Endgame during an October 2018 appearance on The Tonight Show. When it aired, the title, as well as a few other potential plot details, was bleeped out. But it led to a pretty hilarious Twitter exchange in which Anthony and Joe Russo, the directors of both Infinity War and Endgame, tweeted, "Mark, you're fired." (It's totally possible they could've only slightly been kidding.)

But, as it turns out, Ruffalo is in good company. His fellow co-star and Spidey himself Tom Holland has quite the track record with spoilers. According to Joe Russo via IndieWire, not only did Holland not receive a script for Endgame but he got only his own lines. "He doesn't even know who he's acting opposite of," Russo revealed during an April 1 Avengers: Endgame Indian Anthem event, per the website. "We'll just, we use like very vague terms to describe to him what is happening in the scene, because he has a very difficult time keeping his mouth shut."

Well, with the closing of one chapter of the MCU, Ruffalo told E! News he has a reunion idea that could keep his spoiling self going 20 years from now.

He told the outlet, "It's called The Pretendables. It's The Expendables meets Tropic Thunder and we all have to like, we think we’re shooting a Marvel movie but it’s really, we have to fight a real bad guy. And then we fly in Robert Downey Jr. to save us, but we have to pay him 3 million dollars in cash in a garbage bag and then he flies away before he can save us. So, we're stuck saving ourselves."

Never change, Ruffalo, never change. As the release date for Avengers: Endgame looms ever closer, fans will be on high-alert for potential spoilers, particularly when Holland or Ruffalo is doing the talking.