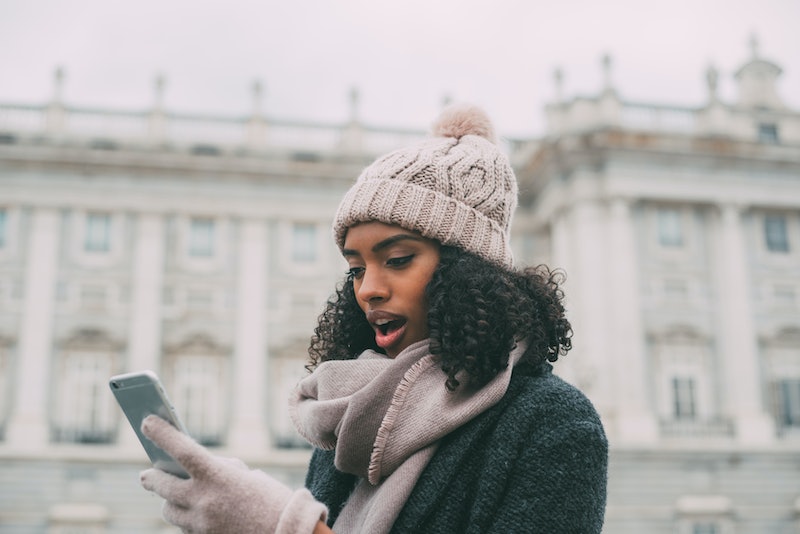 There's a new dating trend here to haunt you — literally. Well, almost literally. "Marleying" is named after Jacob Marley, the ghost who comes back to visit Scrooge during A Christmas Carol. (And if you're not humming the Marley and Marley song from Muppet's Christmas Carol right now, then I don't even know who you are.) But in dating terms, it's basically when an ex reaches out to you during the holiday season — especially if you haven't spoken to them in a long time.

And it's more common than you think. In fact, there's a chance you experienced it sometime this week. The term was coined by eharmony after they surveyed over 4,000 British adults and found that 11 percent of singles have been Marleyed. And, actually, eight percent said that they've been a Marley-er themselves. Though it can happen any time during the holiday season, the most common day for it to happen was Christmas Eve.

So why would people be more likely to reach out to an ex during this time of year? Well, the answer is pretty simple. "The end of the year makes many people feel introspective," Dr. Erika Martinez, licensed psychologist, tells Bustle. "It's not unusual for exes to reach out since they've been reminiscing and feeling nostalgic. This is especially true when there's more possibility of connecting as people return home for the holidays."

It makes total sense because many of us are thinking about the year that we've had and the year that's to come. We may being feeling lonely or nostalgic — or even like we just want a second chance. But when you're the one being Marleyed, it could bring up a lot of confusing feelings. Here's what you need to know.

The holidays can already be an emotional time, with higher levels of anxiety and stress, so hearing from an ex might be very unwelcome. Or maybe it's someone you've been hoping to reconnect with, so it can feel like a good thing. Before you reply (or don't), you should think about what it means and what you would want from this person.

"Avoiding it completely depends on your perceived intention from the person reaching out," Martinez says. "Think about why the relationship ended (good or bad terms). In some cases, exes reach out to makes amends and apologize, while others do so with the hope of rekindling the relationship. Consider what you'd want out of such an encounter and whether it aligns with your hopes and dreams for the New Year. If it doesn't, that's OK. Politely decline and wish them well." Of course, you never should feel pressured to reply or rekindle something that you're not interested in.

Even if you're not interested, the one thing to keep in mind is that the holidays are a sensitive time of year, so make sure to be gentle with the person.

"[P]eople can tend to feel bit sad and lonely over the holidays and are thinking of people who they used to feel connected to," relationship therapist Aimee Hartstein, LCSW tells Bustle. "They have more down time and may be thinking about their past relationships. There is also a lot of pressure (especially with social media) to have fantastic, perfect holidays and relationships. Those of us who are single or not feeling so fantastic might start thinking about time when they did feel better in their relationships and might be motivated to reach out to old flames."

Not only are there higher levels of anxiety and stress this time of year, but it's also a time where singles are under more pressure from friends and family. That doesn't mean you should give someone a second chance — or even a date — just because they reach out to you. It just means that it's important to have a little compassion when you're dealing with someone around the holidays.

The best way to handle it, as Licensed clinical psychotherapist Dr. LeslieBeth Wish tells Bustle, is "with care and kindness." That's all you need to remember.

It may seem like there's a new dating trend every week that describes exes or someone you were seeing resurfacing out of the blue, and at some point they all seem to blend together. But if Marleying comes your way this week, know that this season tends to make people more sensitive and reflective than usual. So whether you choose to reconnect or decline, it's important to be gentle in your response.