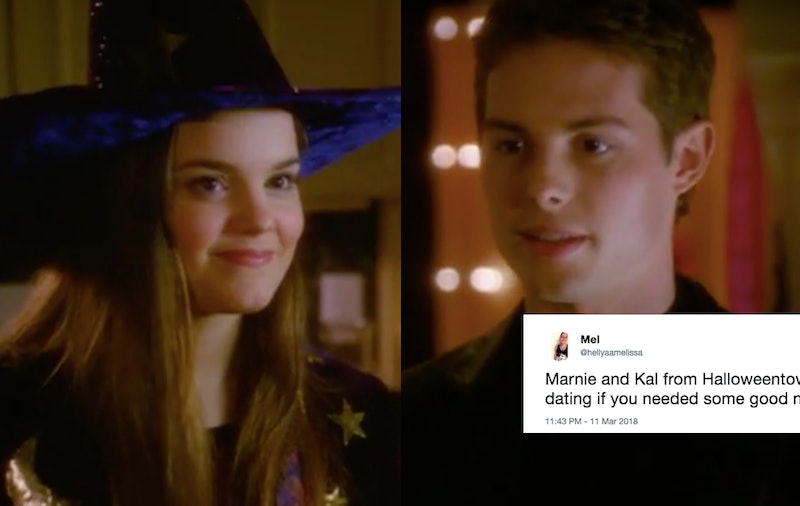 Remember when Kimberly J. Brown unexpectedly dipped out of the Halloweentown franchise after its third installment, leaving droves of Disney fans confused and a little bitter about the loss of the Marnie they'd come to know and love? Fans hoping for closure on that probably shouldn't hold their breath, but there is some old-school Halloweentown magic in the air this week, since apparently Marnie and Kal from Halloweentown are dating in real life, as Seventeen reported on Monday.

Perhaps it'd make more sense to say Brown and Daniel Kountz (who played Kal, Marnie's bad-boy crush, but also a pretty textbook bad guy, in Halloweentown II: Kalabar's Revenge) are dating in real life. But as most fans of the beloved Disney franchise would probably have to agree, they'll always be Marnie and Kal to us.

Those who follow Brown on social media probably already know that she and Kountz have been hanging out noticeably often, especially in recent months, though neither Brown nor Kountz officially confirmed the two were romantically involved. So, in honor of International Kissing Day (last Friday, July 6), Brown took to Instagram with a photo of her and Kountz to seal the deal. "#internationalkissingday you say? I'll just leave this right here then," Brown wrote, penning the IG post's adorably coy caption. She finished the brief caption write-up with perhaps the most appropriate emoji imaginable: the smirking face, naturally.

Fans don't have to wonder too hard about what exactly Brown's getting at here, since the IG post's accompanying photo manages to do most of the talking all on its own.

That's mostly because, even only at a glance, the photo is pretty much oozing with affection. The picture-perfect snapshot features Brown and Kountz engaging in a pretty obviously blissful smooch, in addition to otherwise embodying all the reigning characteristics of a bona fide poster couple for happy, and exceedingly wholesome, relationships. (Seriously, as far as image quality and emotional pull are concerned, this has all the makings of a swoon-worthy magazine ad.)

And in addition to its standalone merits as an incredibly adorable couples shot, the photo has also generated some seriously nostalgic buzz among Halloweentown fans on social media, many of whom seem totally enthused by how far Marnie and Kal have come. When Brown later posted the same photo to her Twitter account, fans almost couldn't believe it. "Whoa Marnie and Kal are dating? Just whoa," one Twitter user wrote, summing up what seems to be the sweeping fan response to this tidbit of relationship news pretty adequately.

And while their kiss takes center stage in the photo — for obvious reasons — it's probably worth it for Halloweentown fans to take a closer look at Brown and Kountz' body language here, too. Those who thought the couple's kiss in and of itself was worth swooning over might have to sit down. Because upon closer inspection, it's pretty clear that Brown and Kountz's kiss means quite a bit more to the duo than a smooch-themed social media post. They look completely infatuated with one another, as indicated in their pose.

And after looking through Brown's other photos with her former co-star, it seems safe to assume that she and Kountz are basically killing it in the romance department.

After Brown's #InternationalKissingDay post, it's now also safe to assume the two are an item. Those who've been following the pair on social media these last several months are probably thinking, "Well, yeah, obviously," since Kountz has been popping up on Brown's Instagram feed pretty consistently for something like eight months now, with the last month or so catalyzing what seems to be a noticeable spike in distinctly couple-y snapshots.

But even as Brown recently took to Instagram with pictures of her and Kountz watching the 4th of July fireworks and attending last week's Cuoco-Cook wedding together, neither half of the couple had uttered a word about the status of their relationship. (Not publicly, at least.)

So, finding out that the couple's real-life romance is legit was nothing short of a huge deal for Halloweentown fans, many of whom haven't seen the two engage in any flirtatious behavior since they did so onscreen way back in 2001. Looks like Kal and Marnie were a match made in Halloweentown after all.