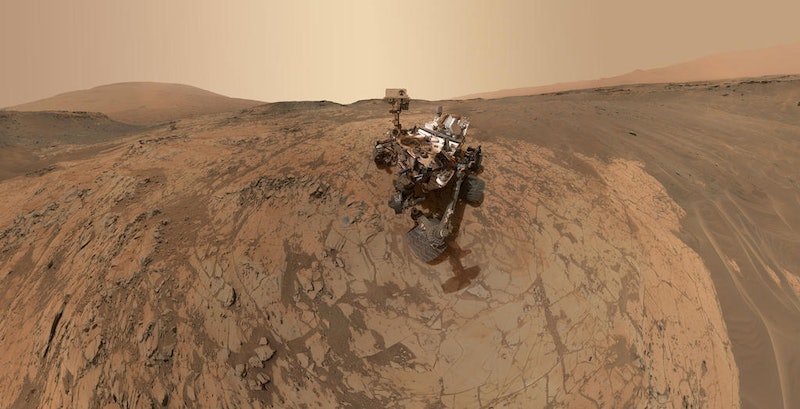 After providing information to NASA for 15 years, Mars Rover Opportunity's last message in June signified the initial end of an era. The robot, who was lovingly named "Oppy," was declared officially dead on Wednesday, Feb. 13 by NASA, after a series of commands sent to Oppy were left unanswered. And now, space lovers across the world are commemorating the Mars rover's lifespan, as well as its haunting, humanlike last message.

Per reporter Jacob Margolis, Oppy's last message in June, right before a massive dust storm took place on Mars, was: "My battery is low and it's getting dark." Oppy was then taken over by the storm, ABC reports, and that was the last NASA ever heard of the poor robot.

Finally, Oppy's time of death was confirmed on Wednesday morning. In a series of photos commemorating Oppy's work over the last decade and a half, the Spirit and Oppy Twitter account praised the work of the robot, writing on Twitter at one point, "This isn’t the end. Opportunity lives on in current and future Mars missions."

As you might imagine, many people on the internet collectively poured their sympathies and heartbreak over Oppy, turning #ThanksOppy into an emotional trend on Twitter.

To BBC, Project Manager John Callas explained NASA's decision to call off the search for Oppy. He said, "We tried valiantly over these last eight months to recover the rover, to get some signal from it. We've listened every single day with sensitive receivers, and we sent over 1,000 recovery commands. We heard nothing and the time has come to say goodbye."

And what a goodbye it has been. Actor Curtis Armstrong wrote on Twitter, "I know. It was a robot, not a human. It lived a good, long, astonishingly productive life. But it's last message has totally messed me up. #ThanksOppy"

The official Mars Rovers Twitter account wrote, "To the robot who turned 90 days into 15 years of exploration: You were, and are, the Opportunity of a lifetime. Rest well, rover. Your mission is complete. (2004-2019)"

Even Vice President Mike Pence got involved, tweeting, "Congratulations to the entire @MarsRovers team. Through ingenuity and hard work, you turned a 90-day mission into 15 years. #ThanksOppy for showing us the beauty and wonder of Mars. You made the country proud!"

As BBC notes, it's not surprising that there's been such an outpouring following the "death" of Oppy: the mission was one of the most successful ventures ever completed by NASA. Oppy confirmed that Mars had contained bodies of water in its planet's history. To BBC, Steve Squyres, Opportunity's chief scientist from Cornell University, explained that this discovery was one of the greatest indicators that Mars was capable of containing life, saying, "[The rovers found] water you could drink. That was one of the mission's most significant discoveries."

If you're in the mood for an emotional activity, you can peruse through the #ThanksOppy hashtag. Be prepared for the thousands of messages of gratitude, awe, and love for the sweet little robot, who managed to survive approximately 14 years and nine months longer than anyone thought it could.

More like this
Read Dan Levy's Heartbreaking Message After The Club Q Shooting
By Stephanie Topacio Long
Iran Has Issued A Death Sentence Over Mahsa Amini Protests
By Catharina Cheung, Darshita Goyal and Maxine Harrison
Here's The Role Lady Susan Hussey Played At Buckingham Palace
By El Hunt
Jude Bellingham’s Superstar Football Talent Runs In The Family
By Maxine Harrison
Get Even More From Bustle — Sign Up For The Newsletter