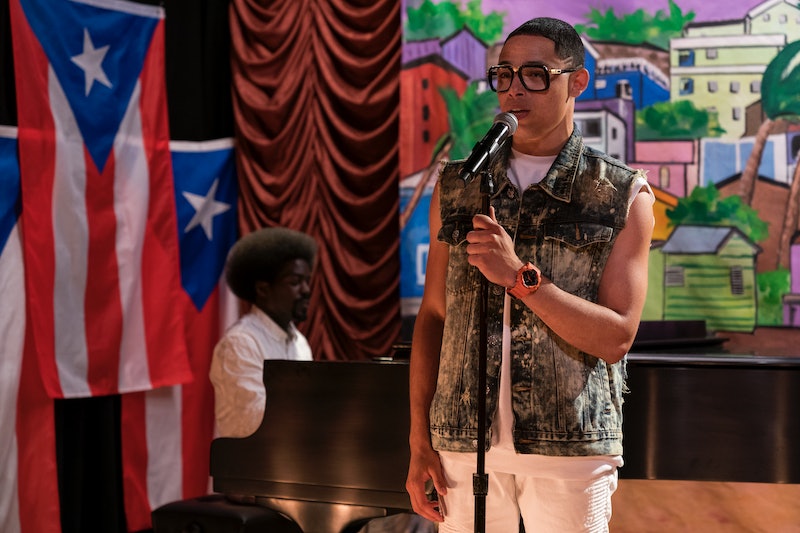 You can't help but love the character that is Mars Blackmon. He was created by Spike Lee for his 1986 film She's Gotta Have It, and multi-talented performer Anthony Ramos reinvented his free spirit for the Netflix series of the same name. Season 2 dropped on the streaming platform on May 24, and in it, Mars' song called "Cry Today, Smile Tomorrow" gets its live debut. Now, fans everywhere are eager to listen to the emotional tune on repeat. Unfortunately, it has yet to be officially released by the show nor Ramos himself.

Season 2 follows main character Nola Darling as she continues to navigate her polyamorous lifestyle along with her booming career as an artist, and Mars finds his way back into the picture when he's out of work and needs a place to crash. Amidst hopping couches, he finds himself reconnecting with Nola's best friend Clorinda.

He shows up at her house when she gets home from work one day, and after they hookup, Mars tries to talk to her about his new music that's in the works. But she's not interested. Overwhelmed by work-related pressures and pent-up emotions, she instead reveals that Mars got her pregnant months prior and that she had an abortion. He had no clue. Confused and hurt, he leaves, and pops up again at the end of the episode to perform at a Hurricane Maria benefit for the people of Puerto Rico where Nola and Shemekka are in attendance.

As soon as Mars steps up to the mic, his goofy disposition falls away and Romas' Broadway expertise takes center stage. The lyrics of the song are equally beautiful and heartbreaking, and the moment Romas opens his mouth to sing, viewers (on and off-screen) simply can't see anyone else. When he reaches the chorus, there isn't a dry eye in sight.

"And all the troubles in my life won't bring me down," he sings. "And all the struggles in my life they teach me how, how I'm perfectly imperfect. And when it hurts, I just remember there's a purpose. So I'll cry today, smile tomorrow."

Hopefully, an official track will be available for listen-crying soon, but a few passionate fans have already taken it upon themselves to cover it, including Hayley Armstrong on YouTube.

Ramos' life as a performer changed forever after he played a part in Lin-Manuel Miranda's original Broadway musical Hamilton as John Laurens and Philip Hamilton for over two years, according to Entertainment Tonight. That experience led him to land his role on She's Gotta Have It along with other on-screen gigs including his part as Lady Gaga's character Ally's best friend in A Star Is Born and his role opposite of Millie Bobby Brown in the upcoming film Godzilla: King of the Monsters.

Although those parts don't have a musical element, he dropped his first solo EP, The Freedom EP, in January 2018 and just landed a lead role as bodega owner Usnavi in Miranda's film adaptation of the Broadway musical In The Heights. He told Vulture that he's very excited for the role, as it's conducive to his goal of uplifting Latinx representation in Hollywood and the performing arts space.

"This was the first musical I’ve ever seen where I was like, I know all of those people," he said. "I know the piragua guy. He just looks different on my block. I know the blonde lady. I know the bodega owner. That changed the game for me. Before then, I wanted to quit [acting]. I was feeling so discouraged because I wasn’t white enough or black enough or tall enough or short enough for the role. I couldn’t be a leading man."

Now, he's not just a leading man. He's on his way to super-stardom.