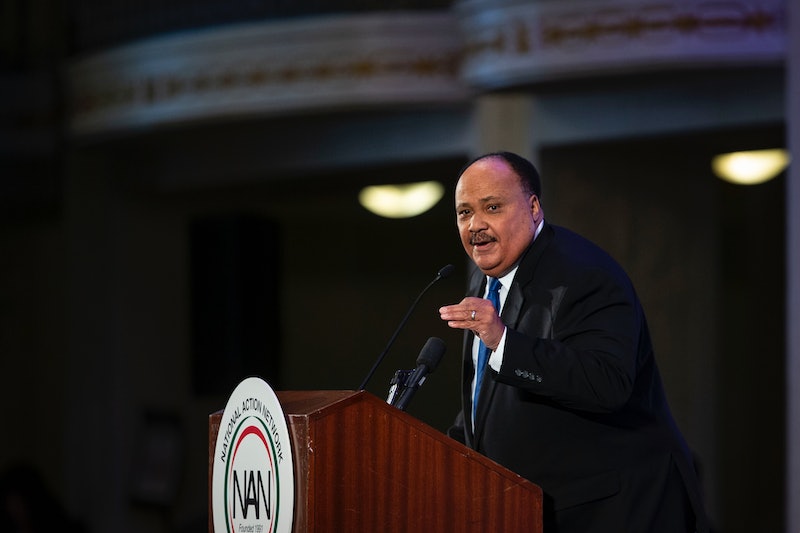 Over the weekend, the Vice President of the United States made headlines for comparing President Donald Trump — and his vision for a U.S.-Mexico border wall — to civil rights activist Dr. Martin Luther King Jr., whose eponymous federal holiday is on Monday. In response, Martin Luther King III called out Mike Pence for his comparison, arguing that his father represented very different ideals

"But one of my favorite quotes from Dr. King was, 'Now is the time to make real the promises of democracy,' " Pence said, according to NBC News. "You think of how he changed America. He inspired us to change through the legislative process to become a more perfect union.”

"That's exactly what President Trump is calling on the Congress to do," the vice president continued. "Come to the table in a spirit of good faith. We'll secure our border, we’ll reopen the government, and we'll move our nation forward as the president said yesterday to even a broader discussion about immigration reform in the months ahead."

Before King III had a chance to weigh in on Pence's reference, the vice president faced intense criticism across social media, some of which came from lawmakers.

"To equate the legacy of one of America’s finest statesmen and champions of civil rights with a vanity project built on racist ideology and hatred is beyond disgraceful," Rep. Jackie Speier tweeted Sunday morning. "@VP owes the American people, and the memory of Dr. King, an immediate and profuse apology. @POTUS is no MLK!"

That criticism continued into the holiday.

"No, @VP Pence and @realDonaldTrump, #MLK would have never supported your wall," Rep. Ilhan Omar tweeted on Monday afternoon. "If he were alive today, MLK would probably be leading a #TSAStrike to end your shutdown."

Pence's comparison comes as the longest federal government shutdown in U.S. history continues with no clear end in sight. At the heart of the issue is President Trump's demand that Congress provide funding for a border wall separating the United States and Mexico. Although Trump has branded the request as an effort to bolster homeland security, Democrats have outright refused to approve the $5.7 billion dollars that Trump has requested. As a result, the government has remained shut down since late December.

Repeated attempts at negotiating an end to the shutdown have all failed. It remains entirely unclear when the government's doors will reopen, although the shutdown's impact has begun taking a toll on national parks, the IRS, and federal employees, among other groups. The extent of the shutdown's impact will likely not be known until it eventually ends.