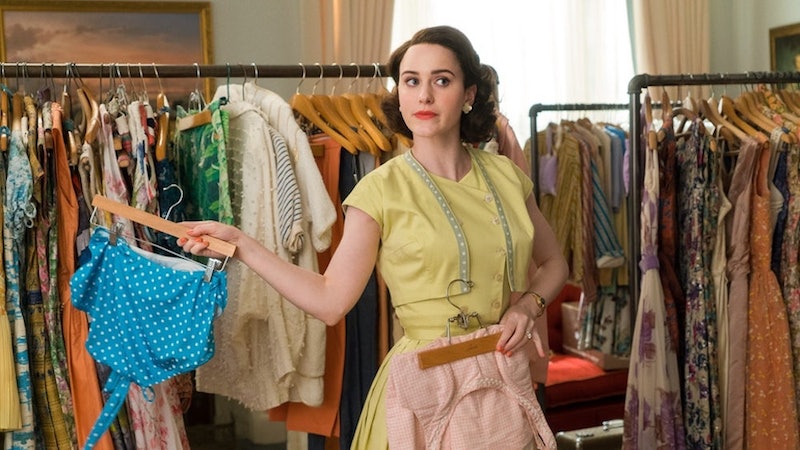 From the busy streets of New York City and Paris to the tranquility of the Catskills, Midge's comedy routine is slowly making its way around the world. And now that she's gearing up to go on tour in the big leagues, she and her routine are about to embark on a new adventure in the Amazon series' third installment. In fact, The Marvelous Mrs. Maisel Season 3 will take place in a sunny new locale. And thanks to a recent interview Entertainment Tonight had with Tony Shalhoub, who plays Midge's father on the show, fans can now look forward to jet-setting off to a new (and very sunny) destination: Florida.

“I think I’ve heard that we’re going to Miami in June. That’s all I know,” the actor teased the outlet at the Writers Guild Awards on Sunday, Feb. 17. “I don’t know what that [involves]. It’s about [Midge’s] tour, but that’s all I got.”

The tour, of course, is in reference to the job offer Midge accepted at the end of Season 2. When fans last saw her, Midge had agreed to join widely successful crooner, Shy Baldwin, on a tour of the United States and Europe. The decision prompted her to forgo her engagement to her new fiancé Benjamin and spend the night with her ex-husband, Joel — a twist that is sure to have ramifications throughout the third season as well.

Knowing that at least part of the season will take place in Miami is interesting. It will definitely make fans wonder how many of the characters will get to enjoy the sunny beaches and beautiful palm trees during Midge's time on the road. Midge and her manager Susie Myerson will obviously be part of the Florida-based filming process, but as for the rest of the cast, that detail remains to be seen. However, given that Shalhoub said that "we're" going to Miami, it stands to reason that Abe and Rose will be there as well to support their daughter's new career on stage, at least for an episode or two.

It was during Season 2 that Abe became aware of Midge's big secret and saw a big part of her comedy firsthand. And while it was initially very difficult for him to wrap is mind around, he seemed to be getting more and more used to the idea — something that will continue on throughout Season 3 as well. “I think that maybe he’s starting to realize that this isn’t just a pipe dream and that maybe, in the eyes of the public, she’s got something," Shalhoub revealed during the same interview. "I’m not sure, but I think there’s a little bit of a thaw going on.”

That's good to hear, considering Midge will probably need her family's support now more than ever. Life on the road isn't exactly easy, especially for a parent.

Of course, that doesn't mean New York City won't still be apart of the story — it is home base for the majority of the characters, after all. But it'll be nice to change things up a bit and see Midge spread her wings in different parts of the country. The people of Miami won't know what hit them.