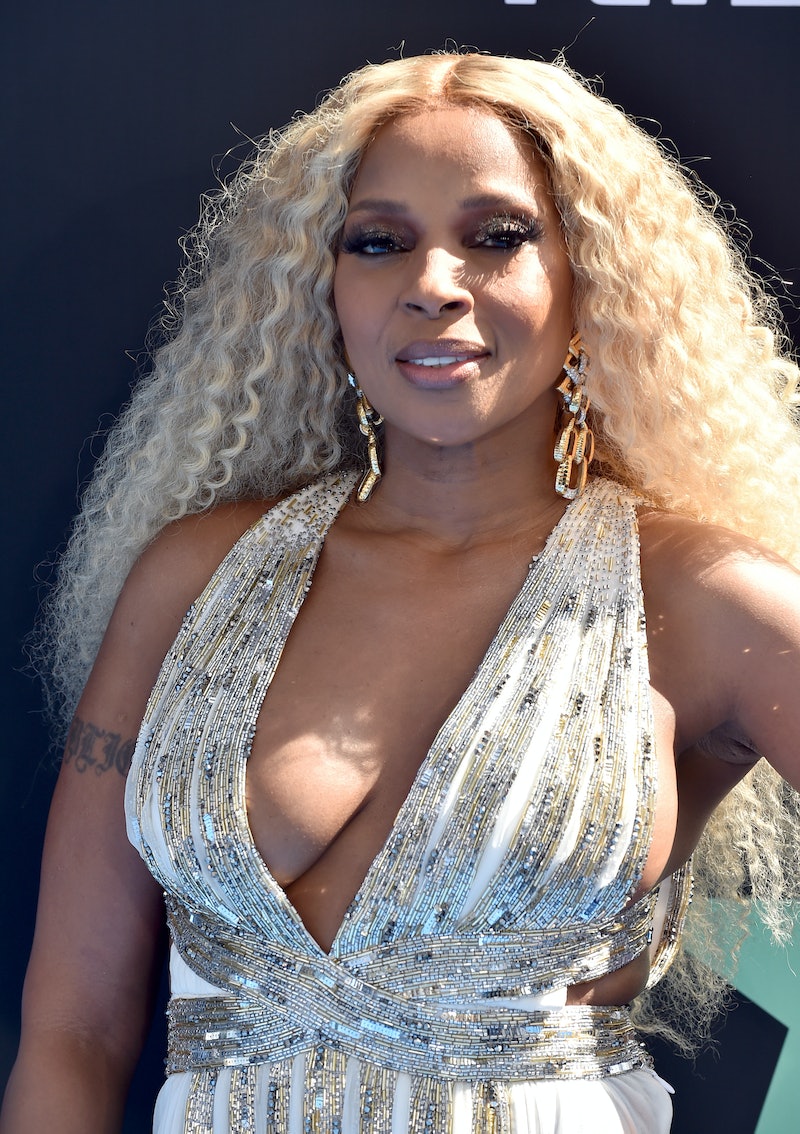 Just when it seemed like tonight's show couldn't get any better, none other than the ultimate queen of hip-hop and soul Mary J. Blige shut down the BET Awards, wearing white all throughout the night.

First arriving on the red carpet rocking a floor-length, glimmering, sequined frock, the superstar's dress was a clear knockout from the jump, but rest of her ensemble was equally noteworthy. Blige also wore her signature platinum blonde hair, which was styled into long, tight, ringlet curls, while she opted for a bold smokey eye and nude lips for her glam. The "Not Gon' Cry" singer completed the look with a few chunky accessories, including statement earrings and large rings on her middle and index fingers.

But Blige wasn't just at the BET Awards for show, she was there to accept one of the most coveted honors of the night: the Lifetime Achievement Award.

In the past, other entertainment icons including Whitney Houston, Diana Ross, and Anita Baker have received the prize, according to Hollywood Life, which surely made the moment all the more special for the singer — whose career has spanned nearly three decades. And in true fashion, she looked absolutely exquisite while accepting her award.

But before she took the stage, fellow queen Rihanna shared a few words with the audience on Blige's legacy, and what her presence has meant to black women. "You opened multiple doors for female artists in this industry," Rihanna said. "And on behalf of all the women that came after you, like myself, thank you for being you so we can feel comfortable being ourselves. Thank you for pouring yourself into every track and giving us a song for every feeling. Thank you for showing us that love is all that we need. But we didn't know how much we needed you."

It was only during her acceptance speech that Blige ditched the all white look, for just a moment, as she slipped into a black and silver bustier dress, sharing, "Although I'm a leader, a queen, a living legend — although I'm all these things, I'm a servant as well and I'm here to serve," she said. "Being a servant is not always glamorous or popular, but it's the job and the assignment that I was given."

However, she sure did look glamorous on stage as she switched back to all white, while she performed several hits from her catalogue including "My Life," "No Drama," as well as "I Can Love You," and "You're All I Need," where Lil' Kim and Method Man joined her on stage, respectively.

Keeping her hair in fluffy ringlet curls throughout the show, Blige wore everything from bold, white shades, to a fur-trimmed, long white coat as she belted out her greatest hits.

And of course, she had to bring out a pair of her signature studded, thigh high boots, which she eventually paired with a matching baseball hat worn backwards — giving anyone who watched her career blossom in the '90s serious nostalgia.

There are few superstars who have had the type of career Blige has had, and even fewer who get the opportunity to honor themselves while looking as fabulous in all white as she did tonight. But she did just that at this year's BET Awards, and she did it well.

More like this
Olivia Wilde Wore A Bustier “Revenge Dress” To The 2022 Governors Awards
By Kelsey Stiegman
Sydney Sweeney Just Revived The Iconic ‘90s Cone Bra Trend
By El Hunt
Florence Pugh’s Governors Awards Naked Dress Is Straight Off The Runway
By Sophie McEvoy
The Best Heels For Bunions, According To A Podiatrist
By Margeaux Baulch Klein and Maria Cassano
Get Even More From Bustle — Sign Up For The Newsletter